Click, click, click — it’s the sound emanating from households all around the world as kiddies (and non-kiddies) vote for their favourites in the Junior Eurovision Song Contest 2017.

This is the first year that viewers have been able to vote for their favourites before the show even starts. As an added twist, viewers can vote for their own countries, a move that has no doubt inspired patriotic fans to get behind their homegrown act.

On Friday evening, a few hours after the official online vote launched, we asked our readers to tell us who they actually voted for. After counting 11,589 votes the results are in — and The Netherlands’s Fource has won the day.

The boy band, which has drawn plenty of positive comments in our YouTube interview, came out on top with 1,199 votes — or around 10% of all those cast. They have an avid fanbase who are turning out and showing their love. Luh-luh-love them, baby? Clearly the answer is yes.

Given that voters can vote for their own country, The Netherlands’ likely benefits from its strong Junior Songfestival TV show, which has done a fantastic job building hype. The boys’ official music video has 1.2 million views on the Junior Songfestival YouTube channel, which itself has 133,000 subscribers. Well done!

In second place in our poll is the adorable Mariana Venancio from Portugal, whose song “YouTuber” has proven to be a guilty pleasure for many.

Initially panned by fans, when RTP released a deliberately humorous cover of the song by a well-known broadcaster, it has gone on to loop on many a playlist.

Rounding out our Top 3 is Armenia’s Misha, who, through clever camera tricks and a hoverboard, appears to fly across the stage.

The “Boomerang” singer earned 1,032 votes, or around 9%. Armenian Eurovision fans are known for their passion and enthusiasm — and they’ll no doubt buoy him in the online vote.

The only other act to earn more than 1,000 votes was Belarus’ Helena Meraai — widely regarded as the pre-contest favourite.

Who did you support in the online vote? (Results) Junior Eurovision 2017 Preview: Your country-by-country guide to the final 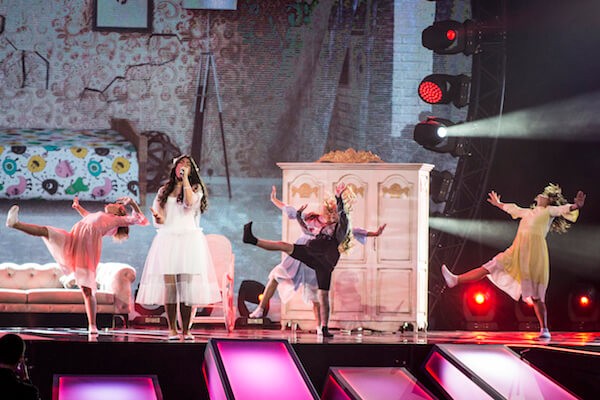 That shows how relevant these polls are :))))) It applies to OGAE poll, too… Never showed the real winner…. Italy ended up on 6th place, though seen as a winner; Same thing with France (Amir), 6th place in the big final while on OGAE was crowned as a winner. Jamala was not even in top 5 on The 2016 OGAE Poll. Same thing in 2015 (Italy seen as a winner in OGAE polls), Sweden in 2014 and so on.

Congrats Russia, although Malta and The Netherlands should have been WAY higher, since the public vote was theirs. It was a disproportionate distribution of jury vote vs public vote. Also, I am upset that the online voting was off after the performances and I couldn’t even vote again. My initial votes for Malta, Russia and Serbia were counted, but I wanted to vote again, with Italy, Albania, Poland and Georgia benefiting from my intended second voting, along with my top favorite, Malta. It was a bad move from the crew which supervised online votes. I know it must be hard,… Read more »

Malta and The Netherlands were blatantly stolen…. shame on you JESC 2017. . .

Thank God it won’t be in Russia next year

After first 5 songs, I have to admit, the Netherlands was the best. (And I did not like the song initially). Cyprus, on the contrary, a song that I adored, was an absolute disaster- juries will kill her, as she was out of tune. Belarus is OK, but lacks that je ne sais quoi. Poland is a jury bait. Armenia weakest in years.

Portugal is….EXCELLENT. It will shock all of you! Ireland will also do well, there is some Salvador Sobral type quality there. FYR Macedonia’s execution is once again too adult, too mature, me think- they should let children to be children.

Georgia , Albania and Ukraine are all decent performances. None of them grabbed me, but I can see that they will all do well with juries. Georgia will do a bit better, as it is bit more original, and appeals to a different constituency.

Malta is incredibly charming, I do not know if they will win, but I would not object another Maltese victory. Russia lives up to its name, with an incredibly professional and polished performance, but it may be a bit tad too serious for a winner. I am really curious if the web voting format will give them an advantage. Serbia will not win, but will (hopefully) not come last. The girls have charisma, and great harmony.

Australia is young, fresh, and certainly in contention. Italy is very good, but may be a bit too much alike with last year’s representative Fiamma.

None of these screams ‘winner’ to me. I think the Netherlands, Portugal, Ireland, Malta, Russia and Australia have all a decent chance to win, Belarus, Georgia and Italy not too far behind. I sincerely hope that voting will be close.

I voted for Ireland, I hope she wins with her calm and cute song! Also I voted for Armenia, Malta, Poland and Serbia.

Who voted for Portugal? This is crazy, Youtuber is a nonsense song, even for a kid. The best are: Belarus, The Netherlands and Armenia… The rest are quite forgettable, honestly….

Remember though, Bzz! won the JESC in 2008, so it’s not like it’s actually based on quality. I hope Portugal doesn’t win though, there are many countries that deserve it more.

Well, these polls are always far from reality because they’re spammed by trolls and insecure nationalists. I’m sure QUALITY (read: Russia) will win the real thing.

i would love to see Portugal at the top3 in JESC..but im not so sure about it

Some people here forgot it’s a KIDS contest, everything can happen over here! The Netherlands and Portugal deserved this, their songs are the songs kids these days likes. And if you’re not agree, that’s fine, I think we will see simular results tonight!

I totally agree with you, but most people voting aren’t kids.

I agree aswell 🙂 For me NL would be a perfect winner. Kid friendly, fun on stage and well performed! (lets not forget singing and dancing at the same time is pretty difficult. They are doing a great job!). Its time for something upbeat to win 😛 im done with all the “best voice” comments, its not a Voice contest people.

YEAS The Netherlands are first they are the real winner i think my top 3 is
3. Russia
2. Belarus
1. THE NETHERLANDS
I vote for them

And some say we do not need juries….Haha.

All we need is the good old televote. That’s historically unbiased in JESC.

LOL!! The results are here to prove you don’t have to be good at this contest to win, you just need to be lucky. Who knows if Portugal and The Netherlands can beat Belarus and Russia at the polls, anything is possible in tonight’s contest.

Agreed, it’s a kidscontest not an adult everything is possible 🙂

But seriously the ranking of these could be true.. 😮