It’s the country that has managed to turn their Eurovision fortunes around in recent years. Now Poland is aiming for a fifth consecutive grand final qualification in Lisbon next year.

But first, they have the task of choosing their representative. And while few details have been released by TVP about Krajowe Eliminacje 2018 (probably owing to their focus on Junior Eurovision), a few artists have recently commented on their possible participation.

Having had the honour of being Poland’s very first representative at Eurovision, where she placed second in 1994, many fans would love to see Edyta Górniak return to the contest and bring Poland back to the top of the scoreboard.

Placing third in Krajowe Eliminacje 2016 with “Grateful”, it seems that she still has the desire to return to the contest and do one better than her 1994 entry.

So when Edyta released her new single “Andromeda” — a modern pop song with tribal percussion backing — at the end of November, questions immediately began to surface about whether she would consider entering it into the 2018 national final.

The song certainly has a Eurovision-orientated team behind it, with Poland’s 2014 representatives Donatan (credited as DON) and Cleo behind the music/production and lyrics respectively. And although the official audio is four minutes long, Edyta recently performed a three-minute version on The Voice of Poland, signalling that she already has a shorter cut ready to go.

Unfortunately, in an interview with eska.pl after her performance, when asked if she would submit “Andromeda” to Krajowe Eliminacje 2018, the Polish star kept her answer short and sweet: “It is too good for Eurovision”.

Fans may wonder why, if Edyta believes the song is so good, she wouldn’t take the opportunity to compete with the song, and give herself the best opportunity to win the national final. However, we can only hope she has other songs lined up for submission, if not in 2018, then in the near future.

Isabell finished fouth in the 2017 national final with the Fredrik Kempe-penned “Voiceless”. It came in second with the jury, behind eventual overall winner Kasia Mos.

Obviously still keen to represent the country of her parents at Eurovision, Isabell wrote on Facebook:

I get a lot of questions about if I will be sending in a song for the Polish preselections to Eurovision 2018. The answer is YES I will! Stay tuned!

With Isabell living in Stockholm and signed to Warner Music Sweden, it is likely that her entry will be another Swedish-written song. But hey, if she manages to win Poland’s ticket to Lisbon and if Margaret is able to win Melodifestivalen 2018, then we may have a Swedish-Polish cultural exchange on our hands.

Isabell’s confirmation takes it one step further than Poland’s Eurovision 2009 representative Lidia Kopania, who states she is considering a return to the contest and entering a song into the 2018 national selection. Meanwhile, rumours are hotting up that 2016 representative Michal Szpak may also make a return to Poland’s national final with the three-minute long “Don’t Poison Your Heart”.

Who do you want to see compete in Krajowe Eliminacje 2018? Do you think Edyta is right to claim “Andromeda” is too good for Eurovision? And are you excited about possibly seeing Isabell back in the national final? Let us know all your thoughts in the comment section below! Australia: SBS to announce act for Eurovision 2018 this Monday 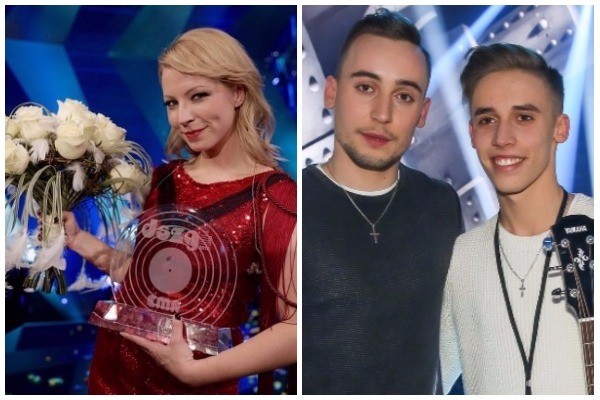 Slovenia: ManuElla and BQL among 16 acts competing in EMA 2018

Yeah, I’m sure, Edyta Górniak is the best eurovision singer of all times. She’s better than James Hetfield from Metallica and Roman Polanski from Hollywood. I’m her biggest fan. ~Miroslove R.

So Edyta thinks her song for Krajowe Eliminacje 2016 (“Grateful”) was average or bad enought to be submitted for Eurovision? That is throwing stones to herself. Don’t know… maybe she is salty about not winning back then. But her words make no sense when 2 years ago she submitted a song to and now that she has a “very good” song, that could place high in Eurovision, she says is too good for it. The song itself is cool, but it isn’t an Eurovision winner, nor it’s “too good for Eurovision”.

Send it to the Grammys.

Dear Edyta, I love “To Nie Ja”! It is one of the best performances ever in Eurovision and you should definitively have won that edition. But Edyta… Really???… So “To Nie Ja” was good enough for ESC, meaning it was an average song, at best? Is this how you feel about you own participation in ESC?… And do you sincerely consider that this machine-made, tuneless and uninspired song is better than any song of last years’ edition?… Edyta, my friend, take a deep breath, listen carefully to the ESC songs, consider your priorities, and once you’re at it, re-consider your… Read more »

Honestly its about on the level of all the machine made, tuneless and uninspired songs that come out of Sweden every year.

Agree, and that is the problem…

Legend better be mad. She was ROBBED in 1994 after she served the best Eurovision entry of all time that still has to be topped in terms of quality and vocals… all that for that forgotten Irish entry to win.

Well she performed in English at the rehearsals for the juries, and she almost got disqualified (rightfully), so she certainly wasn’t robbed. Tastes are different (in my opinion, it was Russia who was robbed in 1994).

Edyta was just protesting against the pointless language rule that shamelessly favored the UK, Ireland and Malta. Truly a pioneer and a social justice warrior.

RE: Isabell – “Voiceless” was good enough before NF but during the show she didn’t impress. She placed high but the overall level of that show (besides Kasia Mos and Carmell) was rather disappointing so it’s not a surprise. We didn’ t hear about her in a year and then she comes back… I’d rather have someone recognizable to represent Poland than somebody who can be know as NF regular with no successes in the music scene.

She’s a diva. Yep, the best voice in our business but still… She teased comeback already in 2015 when Monika Kuszynska was already booked, then took risk by entering national selection the following year and didn’t really recover from the fact that she placed only 3rd. It had to be a huge blow to her ego. In interview after the show she claimed she wasn’t a fan of “Color of Your Life”, considering it too old-fashioned for ESC and not something she would sing and apparently didn’t remember Michal Szpak’s name. It might be an honest mistake but people remember… Read more »

I don’t even like the song. How on Earth is that too good for Eurovision, Edyta? lol. It would probably qualify and end up at bottom 5 in the final. :p

I would like to see Michal Szpak at Eurovision again. :$

This song is nowhere near To Nie Ja. It would not even qualify, even with her big name and Polish diaspora vote.

In Edyta’s case, her song did well in ESC that year.

“My single is too good for Eurovision” means exactly the same thing as “Eurovision is not good enough for my single”.