Last night, 11 acts performed in the first semi-final of Albania’s long-running song competition Festivali i Këngës 56. The qualifiers won’t be confirmed until the end of the second semi-final tonight, but we want to know what you thought of last night’s performances.

Which of these 11 acts should make it to the Saturday’s grand final? Is there a potential Eurovision winner in the mix? Watch the performances of the 11 acts in the first semi-final and tell us which ones were your favourites. Remember, you can vote for as many acts as you like, but you can only vote once.

What are your favourite performances from the first semi-final of Albania’s Festivali i Këngës 56? 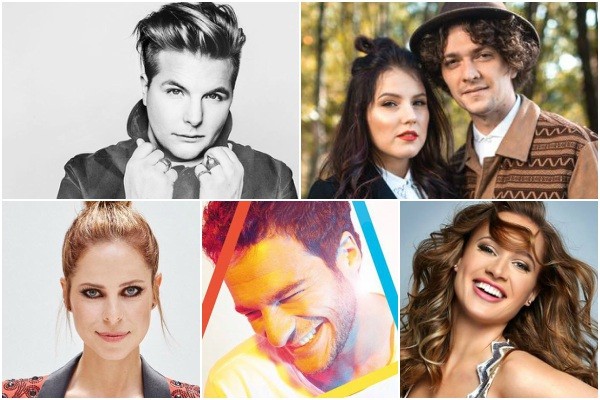 Just started watching the playback of the second semi final. I already like it better than the first semi. 🙂

Yep, the second semi has obliterated the first semi in terms of quality!
Poor Xhesika though, those vocals really cracked 🙁
Inis is outstanding of course, but she has competition. It’s gonna be an interesting final! 🙂

Clearly Eugent Bushpepa is the class of the field here….amazing, powerful, clear vocals with a tune that builds and builds with lots of emotion built in. Definite qualifier! #1

How can i watch the second semi final and when is it?

I think Mariza was the best.
Looking forward to tonight’s show which includes most of my favorites.

Never mind I found it 🙂

Mariza was my FiK favorite overall heading into the semi, but I was kinda disappointed in her performance. Nothing wrong with anything she did, it just didn’t really seem as dramatic as the studio version with the orchestra and everything. I’m sure she’ll qualify, but Inis and Eugent would have to flop tomorrow for her to even have a chance to go to Lisbon.

Well Mall is clearly a cut above the rest in this Semi!!

Manjola and Elton surprised me. I really enjoyed their performance and excellent live. I did not give any Coín for the studio version of Elton’s song.

Mariza and eugent both were outstanding. The best so far in this semi.

Eugent was GREAT.
Mariza was decent.
The rest…

I swear that Albania is a nation of vocalists. Never have I heard a bad performance from someone, and all their representatives we’re amazing singers, and same goes for this year. “Mall” was incredible and we already know that, “Ra Një Yll” and “Unë” also surprised me with stellar performance. Still, SF 2 is the real deal.

I really enjoyed this semi, only “Mesazh” and “Të pandarë” didn’t appeal to me. But “Mall” was definitely the stand-out, Eugent Bushpepa’s singing was flawless. I was also impressed with Rezarta Smaja’s performance, but Luiz Ejlli’s vocals were weak and their song is just not as good. Can’t wait for semi 2, especially Inis and Lynx!

I think it’s only me But Endri & Stefi seem to be totally underrated
I like most of the entries this year I find this song pulls me in every time
It reminds me of the winner of San remo 2016 that didn’t go to Eurovision?….And I loved that song!
This gives me goosebumps
But I think its only me??

Well, he is one of the favourites and he didn’t disappoint.

It even has the two freaky twins from The Leage of Gentlemen pop up towards the end to add some scary comedy in the performance.

But i absolutely love the song.

Eugent by far. The rest were between bad and average. Terrible Semi (song wise, production was ok. Thought too slow.)

I think the waltz triple beat, which gives a kind “pushing and “driving” sense to the song, is doing the thing for Eugent Bushpepa – Mall. And the singing of course. But for me it’s really the drummer who catch my attention.

The drummer was really feeling it xD.

“Mall” and “Unë” were my favourites before the show and both singers gave very good performances. I would have preferred Mariza Ikonomi to play the piano though. “Mall” could reach a high position in Eurovision or fail miserably (pretty much like most Albanian Eurovision entries).

My personal top 3 were:

I also liked Bojken Lako, Manjola Nallbani, Genc & David Tukici. Others were just kind of there, I guess. Nobody was worth noting as ‘bad’.

I gave votes to four songs, so no worries. Some of us understand. 🙂

I’m mostly excited for tonight’s show, because two of my favourites (Inis and Orgesa) are going to perform. 🙂