Latvia’s Supernova 2018 draws ever closer. Our Wiwi Jury is now a third of the way through the 21 songs that are competing. Our team of music un-professionals continue on their trip through the country, this time looking at Monta with “1000 Roses”.

Monta’s already had some experience at Supernova, appearing last year as a backing vocalist for My Radiant You. She’s going solo this year though, having released her first single “Goodnight” in 2017.

Jonathan: This would sound perfect on a movie soundtrack, when the romantic couple are running through a field of…1000 roses. Although it’s probably not Latvia’s best option, it is definitely a respectable Supernova entry, and it wouldn’t be out of place in that final. However, it would likely get forgotten amongst the barrage of other more heavy-hitting ballads in the Eurovision semi-final.

Luis: This is sweet, languid and too bland. Monta has a lovely voice, but that’s all. The song feels longer, the piano at the beginning becomes irritating, and once it ends, the remaining two and a half minutes feel like the background music of five perfume adverts in a row.

Robyn: This is a really inoffensive, ’90s style song of personal strength. It’s the sort of song that ends up in a film trailer, over scenes of the divorced mom learning to love again. So yeah, it’s not for everyone, but it will surely make some listeners happy. Cute, but not captivating. 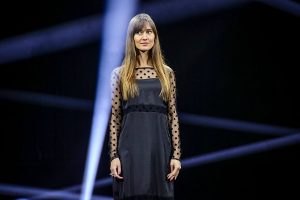 William: Girl, you ain’t got to lay down — the sweetness of your roses blows whatever your position, so long as you sing. This voice is tender, warm and inviting — it has a Pretenders vibe and I’m lapping it up. The song, which I initially thought I’d write off, has a jaunty, upbeat vibe that makes me want to bob my head. Sure, I feel like I’ve heard this before. But it’s got such a nice vibe I don’t mind hearing it again.

Jordi: Serving a pure sweet pop feeling and heavenly rhythms, Monta is ready to fill Supernova with tenderness and joyful sounds. While “1000 Roses” does sound pleasant and sends your daydreaming with its melody, it’s also a little bit over-sweet. When it comes to Eurovision though, it’s just not as original as it could be – it feels we have already heard songs like this one before.

Chris: There’s something incredibly familiar to the melody of “1000 Roses”. It actually works in its favour to begin with, as it helps get you right in to the song. There’s no big surprise here, just a perfectly pleasant pop song. Unfortunately, the downside is you then spend the last two minutes of the song, trying to work out which other song it sounds like. Answers on a postcard, please.

Edgars: Generic but uplifting. You just feel better every time you hear this song. But at the same time, you just end up feeling like you’ve heard this song a thousand times before.

Second place so far for Monta with our jury – will she be able to get one better at Supernova itself? What do you think about “1000 Roses”? Let us know your thoughts in the comments section! No, no, no! Nathan Trent freaks out over technical mishap in premiere of new single “Won’t Let You Go” This can truly be a movie soundtrack. I like the music, her voice and the whole atmosphere it creates. It’s sweet, romantic and beautiful. I don’t know if it can win Supernova, but it’s one of the good songs in the selection.
7/10

Very nice voice. Sweet harmonies. Sweet lyrics. Harp accompaniment is beautiful. Key change in the third minute gets an extra mark. What this song is missing is a video and/or visuals. The song is so laid back that it risks becoming forgotten. It might win Supernova, but it probably wouldn’t qualify at Eurovision. 7/10

It’s sweet, calming and romantic, but a little monotone and anticlimactic. 6.5/10

Of course it’s not the most original song we’ve heard… But it’s sweet and, as i can read in most of the reviews, it makes people feel good. It’s already something, right? For me it deserves a top 3 at Supernova.

This is a feel good song. Again the chorus needed more power. But it’s charming and likable.
7/10

Haven’t listened to the Latvian songs but omg her name… in Italian “monta” means animal breeding.

In Bengali it means mind.

You need to listen to this song. I think you would like it.

I absolutely love this. My winner.