All week Armenia’s AMPTV has been gifting us with the songs that will compete in Depi Evratesil 2018 — its national selection for Eurovision. The twenty tracks cut across genre (emotional ballads, upbeat dance, ethnic pop and disco bangers) and language (English, Armenian, Spanish). The artists are as diverse. Among them are a Eurovision alum (Tamar Kaprelian), a Depi Evratesil veteran (Asmik Shiroyan), singers from Armenia’s vast diaspora (including Sevak) and one very animated drag queen (Kamil). Armenia really has taken things to another level this year.

In the weeks ahead we’ll see each of the acts perform on the Yerevan stage, giving us a chance to assess their live vocals and whether their songs translate to television. But for now we want to know: Which artist and song is your early favourite to win?

You can listen to all of the songs in the playlist above. Then vote in our poll. You can vote for as many acts as you’d like, but you can only vote ONE time. Be sure to tick the box next to each act you want to support before pressing submit.

Then sound off in our comments section. Which studio cuts have lit your fire? Which songs do you think will improve live? And which acts do you think could do the best at Eurovision for Armenia? Let us know down below! 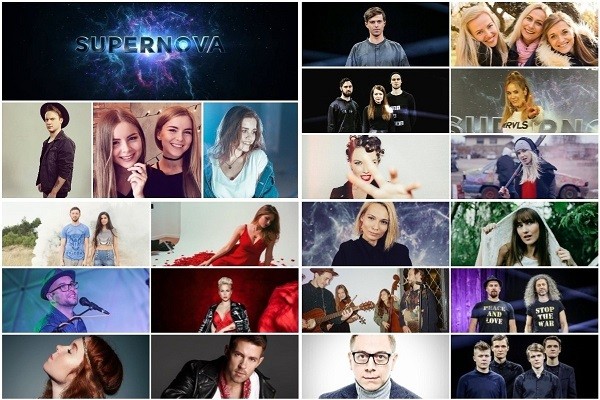 Poll: What are your favourite songs in Latvia’s Supernova 2018?

Hmmm. make fake polls. Seems people are now uploading videos on youtube from Europe with their favourite finalists from around ESC including Armenia.. seems the you tubers with more than 200 subscribers and guess what children ?? It is not even close to this “circus” called a “poll” but I had to come back here for entertainment, people buying fake polls and fake views and likes are just kidding themselves, now the market is reacting 🙂 hilarious and idiotic that some of the nominees have reverted to this nonsense 🙂

Wowwwww
I’m impressed with so many good options…. it would be nice to have a Tamar comeback, but I think it would be better someone new… Asmik, Amalyia, Angel, Gevorg or Zhanna are fantastic

There’s many good songs. First i though Tamar would be my choice but after thinking i realised i would like to see something fun and still good sounding, so Kamil is my choice. Sure, i have no idea how’s the live performance but i expect it to be fun aswell. I like especially the woman singing, good singer, there but Kamil brings the funny element. Good combination! My favorite song so far on this season among different countries national participants.

Here are 10 of the acts all together, for anyone interested in seeing them. Y’all can see what Kamil really looks and carries himself like @ 1:35. Angel and Gata Band frontman also speak.
https://www.youtube.com/watch?v=2jYc-IjMOqs

Is this poll some joke? The only thing genuine about this poll is the names of the contestants, can’t believe they are paying people to vote… can only happen with an Armenia National Selection.. not good at all

I’m from Belgium and I voted for Tamar. Everyone here is supporting Tamar!

Holy crap!! Over 14000 votes for a country with 2,000,000 people and the person ahead has got 24% of the vote, what a joke! Look at other polls on this website and no one has the same % and vote count, she is only kidding herself and wiwibloggs are just kidding themselves but have to say this is very entertaining 🙂

Perhaps we are interesting for people 😀 Look at the forums; the Armenian topics are always one of the hottest, even when we are not involved.

Armenia MUST pick Asmik. Such a world class singer with world class song. Have been missing such acts in Eurovision. Positive&full of energy, will kill it definitely.

This voting is sooo fake. There is absolutely no way Tamar overcoming Sevak. WTF is that? Everyone know that Sevak is more famous than Tamar, and just in few hours accidently she gets +1000 votes? WTF is this??

I peronally dislike the entry of Sevak and so do also many other people.
My vote goes to Tamar and Asmik. Sevak is not qualified for Eurovision.

Asmik Shiroyan was the best last year and this your too!

Fake voting, the votes are being artifically added. Until yesterday Sevak wav absolute winner and suddenly in a few minutes Tamar came first -_- it is so obvious that wiwiblogs is fakely trying to boost Tamar! Go Sevak #QamiWorWin

Asmik is my real winner :)) Good luck with your fake voting

At first listen, it sounded to me as if Kamil was mocking a Spanish record about Puerto Rico. Having since learned about the drag persona, I have no idea what to make of it! Is it the musical version of graffiti? And if so, what is the statement?
(Discuss).

As for everyone else, there are some really good songs here. 🙂

I will be here to see all of you Tamar fans cry later in February. LOL

KAMIL FOR THE WIN!

Because, Armenia, time to send something fun and catchy and mock whatever ESC wanna be nowadays.

It’s just the most memorable tune/show, not necessarily the best song.

Go to hell…Sevak is the best

That’s pretty much it.

Kamil is disturbing me. I really feel this is just plainly mocking Drag culture. Which is of course a parody on its own. Armenia sends unique songs every year with lots of flavour and culture. Usually partly in their own language; Which I really appreciate btw. Doesn’t mean I am a big fan of their last few entries, but they try to show off some of their culture and thats always awesome. Pick Kamil and you can expect Emmy 2.0; Non qualifier.

Correction: Conchita HAS class. Not dead yet. x

I may be the only one, but I stan Hayk Kasparov and I’m #proud

From what I understand, the battle is between Tamar and Asmik.
Personally, I’d pick Asmik. I still remember the song. It stands out.

Tamar’s Ethno-pop song is so nice. Can’t wait to see her on Eurovision stage.

This poll is rigged, wiwibloggs is on the take, using idiotic wordpress poll with ip addresses exposed , it’s all just fake.. Trump called it “fake news” here is “fake polls” no credibility wiwibloggs just on the take

Wiwibloggs is a lot of fun, like all of Eurovision should be. The blog only provides the means for the poll – It is “fans” who abuse that means. Please blame yourselves first for a lack of credibility before you blame Wiwibloggs.

Wtf? Me personally, I’m from Belgium and I voted for Tamar like everyone else.

you don’t need to pay anyone to vote multiple times, just use a VPN

Maria is my favorite by a mile, but anyone of this top 7 that is chosen to go to Lisbon, will be a good choice for Armenia! I don’t understand how there are people that actually like Kamil’s song, that thing shouldn’t even be taken seriously!

Your top 3 are all, thanks to their *liberal* use of English, set up to be Emmy 2.0s. “You think I am fool” from Angel, random phrases stitch together admittedly rather well by Maria’s Secret to form rather confusing rap and please I beg for someone to tell me what “Get Away With Us” translates to in English or at least how to get away with Robert and his songwriters so that we can teach them to form more coherent lyrics.

Tamar is not only a good songwriter and singer.She did and continues to do huge non-profit work in Armenia.Besides her song is catchy and unique. Tamar for Eurovision 2018.

I like Tamar’s and Asmik’s songs here. Tamar would be a much clearer favorite, if only she wouldn’t butcher the chorus with screaming POISON RUNNING THROUGH MUH VEINS, because the chorus started out so good

Not a fan of any of the songs in this selection tbh. They’re all rather boring and outdated. I support Kamil, just because that is the only song I remember. xD Plus that would be a very good choice for the country where homophobia considered to be okay. 😉

Yerevan is calling
Reply to  Jerusalem 2019

Don’t know about homophobia in Armenia but you definitely homoaddicted and the crise of your homoaddiction explodes when you see anything about Armenia! 🙂 Take deep preath and an advise from kamil:

Glue’pizza
Reply to  Yerevan is calling

What does this Kamil girl have to do with gay people? FYI, I get the feeling he is actually mocking Drags, which are a parody on them own. If anything I think he isn’t as gay friendly as you think he is. Besides, dressing up doesn’t immediatly make you a drag either, considering a lot of stand up comedians from all around this century

And before pointing your fingers all over Armenia. Outside of your capital Tel Aviv I doubt people are as gay friendly as you Israeli’s think.

He’s NOT gay guys :’D it’s just his fake and funny personage :’D he’s a boy, and his name is Arsen Grigoryan not Kamil 😀

AND FHAAAAAAAAAT ARE PEOPLE COMPLAINING ABOUT THE QUALITY OF THE NATIONAL FINAL???? ARE OUT OF YOUR GOD FREAKING DAMN MINDS???? TOP 7 SONGS OF THIS SELECTION ARE TOP 10 MATERIAL IN THE ACTUAL ESC AND DEEEEEEEFINITELY BETTER THAN THE MAJORITY OF THE MEDIOCRE SONGS OTHER COUNTRIES SEND. PEEEERIOD!!!

Voted for Sevak. I don’t understand the hype over Tamar.

Disappointing selection in my opinion. I’ll save some songs, but not expecting any top 10 for them :
1/ Asmik Shiroyan (6,5)
2/ Amaliya Margaryan (6,5)
3/ Mariam (6).
Kamil is not a bad troll act and might do kinda well. Tamar’s song needs a revamp, but its basics are strong.

That would be hilarious if Kamil actually won the contest and represented Armenia. I can already imagine the reaction of armenian homophobes. Let’s make it happen, guys. KAMIL FTW! 😀

Kamil in duet with song Puertorico is best song . I m dissapointed with quality of song, not good national final like MGP in Norway.

Yerevan is calling
Reply to  PP

The quality actually is much better than the quality of MGP. The songs of MGP are avarage radiofriendly songs and nearly all of them sound the same. While in Depi Evratesil there is huge diversity and there are quite good acts: – Fun Drag Queen Act (Kamil) – Good ethno pop (Tamar) – Nice country ballad and pop rock (Lusine and Alternativ) – Folk (Gata Band) – Radio friendly shake shake (Asmik) -Nice BAllads Sevak and Amalya – Modern Pop-Rap mix (Maria’s Secret) – Nice pop song from Robert Just some ppl are jealous that small Armenia may afford such… Read more »

Yerevan is calling
Reply to  PP

Even Gevorg’s song sounds better than Rise like Phoenix. It’s instrumental is by far better and rich!