The finalists for Söngvakeppnin 2018 have just been revealed, and like always, there are veterans mixed with newbies. In a small country like Iceland, where everybody knows everybody and people often intertwine with one another by relations or friendship, it is always exciting to see new faces on the scene. Especially in Söngvakeppnin. Here are some facts about this year’s fresh and upcoming stars of Iceland.

Only a few Söngvakeppnin alumni are participating this year including Aron Hannes, Rakel Pálsdóttir and Stefanía Svavarsdóttir. They are known to Eurovision fans all over, but what about the rest of the gang? Let’s take a look at this year’s newbies.

A versatile woman indeed, for Thorunn is a singer, an actress and a DJ. She is well known for her electronic music style and soothing voice. It truly was only a matter of time until she would dip her toes in the Eurovision pod in some shape or form. She first burst onto the scene back in 2003 with her hit single “Play Me” and caught the everyone’s attention. She has been approached time and time again by several songwriters over the years to take part in Söngvakeppnin. This time she claims that “Shine” is the right song. Will she shine bright and wow Iceland?

He might not be a super famous everyday name on the Icelandic music scene, but he is still known nonetheless for his powerful voice. After being voted “Voice of the year” in 2008, he went on to win the 2011 Söngkeppni Framhaldsskólanna, a contest that has given us several Eurovision stars in the past, like Hera, Birgitta, Jónsi, Selma and many more. Dagur participated in the UK X Factor the following year and even made Anastacia cry. He was voted out in the early stages and since then, he’s been lending his voice and talents on several tribute shows, such as Bat Out of Hell:40 Years and Led Zeppelin. This will be his very first time on the Icelandic Eurovision stage, but hopefully not the last.

Originally formed by friends Nökkvi Fjalar and Egill Ploder, this performance project has flirted with all forms of art, music, acting and most lately radio hosting. From the beginning, Áttan has been both loved and branded as controversial. Known for upbeat tunes and sometimes rather vulgar sense of humor, Áttan has been a force to be reckoned with in Iceland, especially among the younger crowd. They’ve teamed up with the gorgeous Sonja Valden to sing their song along with Egill Ploder. Will they be taking their talents away from radio and YouTube and onto the big stage in Lisbon with their song “Here for You”?

He is only 20 years old but this talented tenor has more experience than many others. After playing the lead role in Oliver Twist at the age of 11, Ari discovered that his singing voice was pretty darn good, and decided to pursue a singing career. That pursuit has paid off, for not only has he competed both in Ísland Got Talent as well as The Voice, he has also performed with the Norwegian power diva Sissel Kyrkjebo… twice! Oh, and he is also Paul Oscar’s nephew and definitely worth noticing in the future. He will be performing “Our Choice”, but will he be Iceland’s choice?

This group consists of some of Iceland’s best known actresses and has been going strong for over 20 years. They originally formed the band back in 1997 as a pet project and have several cover singles under their belt as well as one album. They seek their inspiration in the ’50s American housewife, and perform their stuff with a snarky sense of humour, underlining the “baby boomer” generation style, where the woman was supposed to stay at home and take care of her husband and children. Their song “Kúst og Fæjó” is the epitome of that era, for the title means “A broom and a dustpan”. Will Iceland recognize their sense of humour or will they be swept under the carpet with aforementioned domestic tools?

The Voice was a jumpstart for those two, as so many others on this list. Gyða Margrét managed to turn two chairs, including Svala’s during her very first notes, and Þórir was also a battle material for the judges. Gyða has been doing her stuff for some time now, and is also a composer and lyricist as well as a singer. Before The Voice, Þórir competed in Söngkeppni Framhaldsskólanna and is also a footballer. Will their duet “With You” turn Iceland’s heads towards them?

Another The Voice spawn. After each being eliminated at various stages on the show, this group of powerhouse vocalists decided to join forces and since the end run of series, they’ve been performing all over Iceland. Their main goal is to entertain, and they are certainly nothing but entertaining, with their brilliant voices and a big sense of humour as well. They will be performing the song “Battleline” and time will tell if they will end up in the ultimate battleline in Lisbon.

Icelanders might not know the singer and songwriter Guðmundur Þórarinsson, but they certainly know the footballer Guðmundur. He’s played football both in Denmark and Sweden, and is currently playing with IFK Norrköping as a midfielder. But he clearly holds a musical side to him that not many knew about, and has decided to put it all out there, performing the song “Colours”. Then again, maybe his musical side isn’t so far off, for Guðmundur is the little brother of Ingó, who came second after Yohanna in Söngvakeppnin 2009. Footballing musical talent must run in the family. Will he show Iceland his very true colours and sing his way to Lisbon, or will he be shown the red card and sent off the field? We’re dying to find out!

Both competed in — you guessed it!  — The Voice. Tómas was a member of Svala’s team, so maybe she can give him some advice on how to win Söngvakeppnin. Sólborg is not only a singer, but a rapper as well as an active spokesperson for UNICEF Ísland. She even shaved her head to support the organization. They will join each other on stage and sing “Think it Through”. Maybe Iceland won’t even have to think it through and will decide to award them a ticket to Portugal. Who knows?

Actress, screenwriter, producer and filmmaker — you name it! This 37-year-old multitasker has heaps of experience under her belt, but this is the first time she’s gracing the Eurovision stage. Agnes is part of a trio along with Stefanía Svavars and Regína Lilja Magnúsdóttir (former member of HINEMOA from 2015). Their song is called “Heart Attack” and hopefully they wont cause any heart attacks, but rather make our hearts beat faster.

What do you think of the Söngvakeppnin newcomers? Who would you like to see Iceland send to Lisbon? Tell us what you think below! 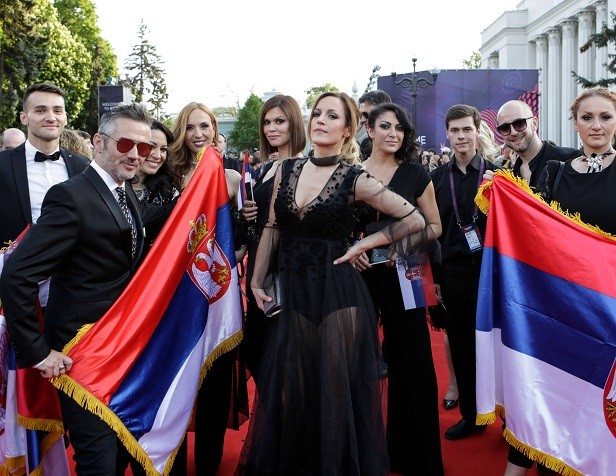 Latvia: Wiwi Jury reviews In My Head with “Sunset”

Colours is the best bet tbh.

“Colours” is so sweet <3 My favorite of this year's entries from Iceland. And that whistling bit reminds me of Sebalter's "Hunter of Stars"!

You know what? Kúst og fæjó is the best of the bunch, which is a bit weird to say, but I’ll stick to it #KústogfæjóFTW

Very interesting and original article! Well done! Kristin, you are as good as always. 🙂 I hope it will be more news about Songvakeppnin and Icelandic music and musicians, I adore this country and people.

With You is pure quality. I like the sound and the joy in the song. Please Iceland think wise and pick this song.

I’d go with Colours cause not many sweet songs are gonna make it to Lisbon so atleast it’ll be different. As Da da dam and me and my guitar showed these songs can do well