The Wiwi Jury — our in-house panel of music unprofessionals — continues to listen to and review the eight competing acts in France’s Destination Eurovision 2018. Next up is the young performer Max Cinnamon with his song “Ailleurs”. Did it make us want to look elsewhere? Read on to find out!

Kristin: Aaaawww, isn’t he just the cutest?! Hugs! Max is one solid performer live. He seems comfortable on stage and that is his biggest asset, along with his steady voice. “Ailleurs” runs smoothly and is a very approachable song. It doesn’t create any fireworks but it’s strong in its simplicity nonetheless. Sometimes less truly is more.

Bernardo: Max’s stage presence is the highlight of the entire production. That and his vocal control — incredibly stable for his age. “Ailleurs” isn’t much different to what we hear in the radio nowadays and despite that being a formula for success to get a radio hit, it doesn’t bring anything new to the table in Eurovision. It falls in the average category.

William: What are good vocals made of? Max Cinnamon and spice and everything nice! His voice, which seems to have only recently changed, has so much potential and he’s already wielding it like a pro. Undaunted by the stage, he walked out with confidence and nailed it. The toe-tapping, guitar-strumming song is a feel-good ditty that rides the current trends — perhaps a bit too closely. But regardless it announces the arrival of a talent to watch in the years ahead. Just not at Eurovision 2018.

Deban: Simplicity is what drives this entry. Max Cinnamon gets bonus points for sounding just like his studio version. I love the bilingual approach adopted here. However, although this is a pleasant number, it isn’t punching any headlights.

Jovana: It seems that this year we have an Ed Sheeran in every national final. It’s like every country has its own “Shape of You”. “Ailleurs” is a good, catchy song overall, plus it has a chorus in English so you don’t need to know French to sing to it. But it sounds too familiar and not at all fresh, which is why I can’t give it a higher score.

Lukas: Max is so cute and his performance was very charming as well. Everything about this song and performance screamed Ed Sheeran. But the song needs a better climax because right now it is missing. I would like to see more power in Max’s voice as well because right now this entry is to safe for me. 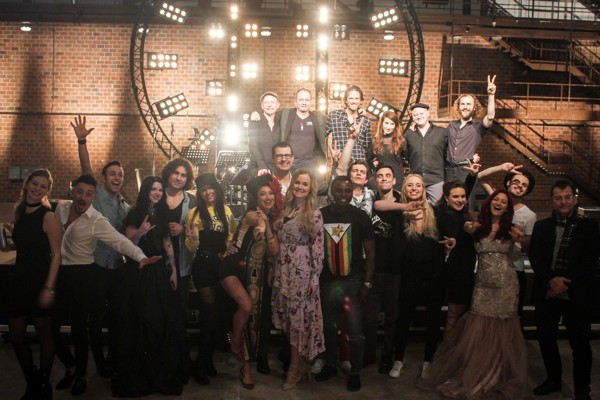 I personally have enjoyed the song, but I felt it was underwhelming because Max seemed to be too nervous – wish him to feel more relaxed. Everything is accurate here and doesn’t bore me. Neat song.

I’m in late but this is the English traduction (even if half of the song is already in English : D ) “We are in the middle of the crowd In pause mode, we stay still in front of people who are flowing I swing my suspended spirit, hanging on your words That saves us lost hours And if your look was there like that without consequence? What if it was feelings, and links that begin? And what if we went to the moon and the stars came out And we followed our hearts, making way through the cheering crowds… Read more »

It’s not my favourite, but it has grown on me. I didn’t have high expectations but his live performance was great for someone with no experience being on stage.
It’s current, it’s one of these songs you can listen playing on the radio. However, I’m afraid it will be unnoticed in Eurovision. Only a good staging will make it better. Nice try though. I’d love to see him again.
7/10

My 4th favorite (currently)
I don’t expect this song to win on Saturday though..

This is my absolute favourite, in the French selection and probably overall of all pre-selection songs that have been released so far. I love everything about it, the composition, the lyrics, the stage presence. It’s subtle and it’s intelligent, and I can’t believe he’s only 16. For me this is dreamy, it take me away to a beach on a hot summer night, and it’s about experiencing that very first love. 10/10

The worst one to make The final. Pretty bland, and His vocals are shakt imo. Sweem was better, but Max does have a good stage presence, but it seems that everyone has that in This selection. France, Please do NOT choose This.
4,5/10

Review Part 1: Musically this is quite a simple four-chord song with some light Latin dance rhythms peppering the melody. For that reason, it would do very well as accompaniment for Strictly Come Dancing / Dancing with the Stars. The lyrics are really good, and very poetic. The meaning of the song seems like a dream – he’s singing about a friend who he has deep feelings for and wants to keep on dancing with all night until their souls become one. The song’s sophistication combined with Max’s cute looks and geeky mannerisms have made this a hit. Those are… Read more »

Due to technical errors, Part 2 of the review can’t be sent. Frustrating.
Score: 8/10

Annoyingly, my review won’t post again. I will try re-typing it on a different browser.

Here we go again. Didn’t work. I will try to split the review up and find the words that are not passing the censorship. 🙁

It’s something to do with Part 2 of the review that isn’t sending. It is becoming very frustrating not knowing which words are not passing the censors. Please can I have some feedback on this, as it is most irritating? Thank you.

This happened to me a few days ago with some Belarusian news. I don’t know where the problem, but my message wasn’t sent and I tried it many times. Maybe it has something to do with some anti-spam tool…

Thanks. I didn’t include any links in my review though. And there was no bad language that I could see.

This has really grown on me. It has now become my #2 in the French National Final. But that’s as high as it can go because nothing can beat Mercy.

It’s cute, charming, well sung and well produced. Not the best in France, but it would easily be the best by a mile in, let’s say, Belarus. Oh, national finals, why are you so uneven.

I dont get the allure with max cinnamon at all!! Not the best song and the chorus is too low on impact!!
My least favorite of the 8
I like Cinnamon though
A 5/10

Nice, cute song. Got nothing bad to say about it but seriously, it is up against some juggernauts in France. Does anyone come away from Destination Eurovision with Max’s song in their heads? Potentially, it would have the same problem if it was picked. Again, there is nothing wrong with it but seriously…

How exactly can one describe “Ed Sheeran sound”? A pop-meets-acoustic?

Good performer, but the song is quite forgettable. I don’t see this going anywhere.