Our Wiwi Jury is not stopping yet on its trip through Malta, ahead of this weekend’s Malta Eurovision Song Contest 2018. With six acts left to go, can any of them overtake Brooke at the top of the rankings so far?

Answering the call today is Matthew Anthony, with his entry “Call 2Morrow”. What will our team of music un-professionals think of Matthew? Check out our reviews below:

William: Perhaps the most modern of all songs in the selection, this is sultry, well-produced and a bit of an ear worm. The opening notes set the tone instantly and draw you in with mystery and rhythm. He’ll need to be careful with the live performance as it may read as sleaze: lyrics like “Does your body remember my bed?” smack of sweat and sticking rumblings. Throw in awkward thrusts or facial expressions and voters may well be turned off.

Robyn: Musically, “Call 2Morrow” is a decent song — the sort of alternative R&B performed by artists like The Weeknd. Some of the lyrics are odd — “we don’t cuddle” is an unusual song lyric, but still a good example of the devasting end of a relationship — and Matthew Anthony’s vocals don’t quite reach as far as the song requires. But there’s a lot of potential. If he can deliver even more edge and attitude live, it could lift “Call 2Morrow” beyond the studio version.

Angus: As a superficial package, this is promising. Matthew can sing, he looks the part of a cool artist, and the production fizzes with a tribal identity that draws you in. Unfortunately, the lyrics let things down, oscillating between crude and cringeworthy. This could also be torpedoed by the stage performance – the delivery of some of the lyrics in the video can take the crude and turn it creepy. But lyrical handicap aside, this is a ray of hope in Malta’s 2018 lineup.

Antranig: There are some peculiar lyrics throughout the song but musically this is a very solid, modern entry. It doesn’t jump out as something generally appealing, but there are certainly some merits that need to be acknowledged. Matthew is doing his thing and the song is perfect for his vocals. While it doesn’t jump out as a typical Eurovision entry, that could work in his favour. This could end up doing very well.

Jonathan: The first question is: if you’re going to stylise the song title as “Call 2morrow” then why not use the same thing in the lyric video? But OCD aside, the song feels average at best. It’s all rather linear with no peaks/troughs to keep the listener engaged. It’s not likely to work well on stage either, particularly due to the rather cringy dancing and facial expressions Matthew gives us in the lyric video. It’s no wonder they don’t cuddle anymore.

Luis: There’s potential here. Matthew is a breath of fresh air in Malta’s field, but there’s one thing to be careful of: this song will be SO difficult to translate to a stage performance. He needs to think outside the box and bring something explosive or at least something that enhances “Call 2morrow”. This one could be the “Grab The Moment” of 2018.

Are you sending Matthew straight to voicemail? Let us know your thoughts about his entry down in the comments below! 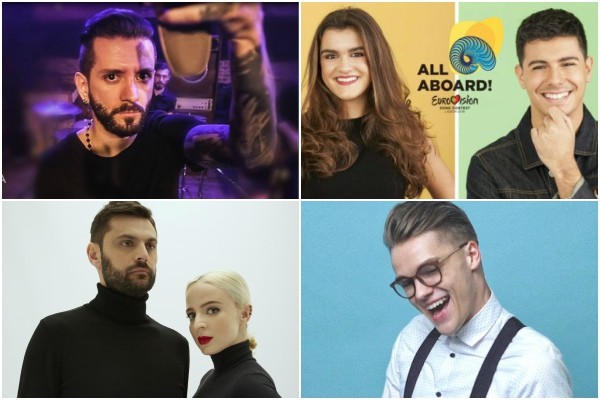 Latvia: Wiwi Jury reviews Ed Rallidae with “What I Had With You”

Nice melody, beautiful voice. I have some trouble with the lyrics though.
5/10

the instrumental is fantastic!!!
but the vocals are not my favorite

This song was amongst memorable ones from this selection. It’s produced in right way – goes smoothly, leaving some charm after it. Vocally there’s no much effort here, so if he’ll pull it better than in studio – I think he’ll benefit. The other question though – perfomance 🙂

This is like that speaking style of singing I absolutely detest and this on doesn’t have a good voice either. Nope …don’t believe this was amongst the best 16 songs Malta received.

The lyrics are laughable, even though I find some enjoyement in his unintentional hilarity. He is obviously trying to be cool and smooth, failing at it, while still leaving some charm, which comes from his cluelessness.

The instrumental is quite interesting, though. It doesn’t sound as generic and as overproduced as most other Maltese entries.

(continued)…to be an absolute mess live. It is a decent song and I like his voice in the studio version. I even like the lyrics and am glad that it brings something different to Malta’s horrible selection. However, there is not enough energy in this song to make it work as a Eurovision entry.

Would’ve been a nice song if it had a decent vocalist.

The song is not to my taste at all. Call today, please? However, this is by far the funniest lyric video from Malta. Watch how Matthew keeps on adjusting his hat! 😀 4.5/10