She became the first confirmed singer for Eurovision 2018 in September. In the months since Laura Groeseneken was unveiled as Belgium’s representative, she’s been keeping a relatively low profile. Until now. In recent days, she’s given a slew of interviews revealing teasers about her song, stage name, and outfit for Lisbon.

Speaking to Flemish broadcaster VRT after Monday’s semi-final draw, Laura confirmed that she would sing under her stage name SENNEK at Eurovision in May. Her reasons are twofold.

Firstly, like her pseudonym, her chosen song lies close to her heart. Secondly, it makes more sense from a practical point of view. Her surname Groeseneken is hard to pronounce for many people.

Her adopted name actually derives from her family name — GroeSEN(N)EKen. She first used the moniker in 2016 while performing as a lead singer with a band of the same name. The group experimented with different music styles, modern mixed with soul, electronic and pop.

Speaking to OGAE Belgium at their New Year’s party, SENNEK confirmed that she has chosen her Eurovision song. She’s now busy working on recording the final studio cut. She wants to make it into something that Belgium can be proud of.

Over the course of three months, she did some 20 co-writes herself while many more songs were submitted externally. Together with her team, she also went looking for publishers.

While that process produced some beautiful songs, the chosen entry is one written and composed by SENNEK herself. From the start of the song selection process until the end, she wanted to be involved with every choice that had to be made. The song had to really belong to her.

SENNEK needed a song where she could fall in love and get goosebumps.

The track will be a pop song which is a bit mysterious. Still talking to OGAE Belgium, she says that it’s hard to attribute it to one specific music style. She didn’t want a song that was specifically for Eurovision. It had to be meaningful.

She jokingly told the VRT interviewer that she will wear fresh underwear. But her actual dress will look “pretty”. It’s being made in collaboration with a well-known designer in Belgium, but SENNEK’s lips are sealed when it comes to more details. “It will be something special”, she says.

About nine years ago, a young Laura Groeseneken went to Lisbon to perform at the Belgian consulate. She says this was a great experience. SENNEK compares it with the exposition in Milan, a place with many, creative minded people.

The singer admits that she had never thought about entering Eurovision, but she is an adventurous person and she really wanted to take on this challenge, viewing it is a once in a lifetime experience.

Because of Belgium’s recent streak of successful entries, she feels a lot of pressure. But she’s not scared. She’s just even more motivated to do well in the contest and to maybe even win.

Are you excited to her SENNEK’s song? Do you think she can take Belgium to the top ten for the fourth time in a row? Let us know in the comments below. 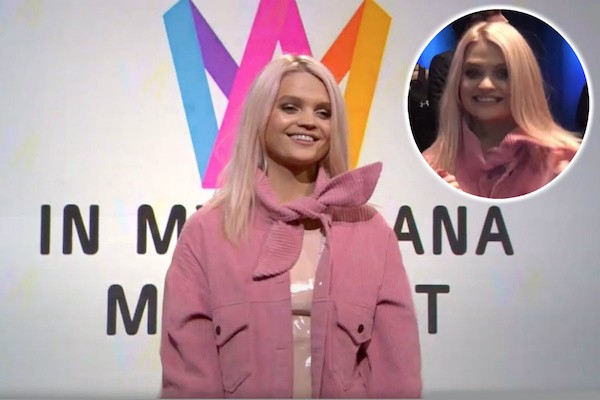 Eurovizijos atranka: Monika Marija to compete with the Erica Jennings song “The Truth”

Really looking forward to the song! Belgium is one of my favourite countries the last few years. They bring wonderful entries.
Hope she continues the good work of Blanche, Laura and Loic!

Belgium is the county I’m looking forward to the most so far. I can’t wait to hear the song!

She says she’s gonna be singing a pop song with a mysterious undertone. Something similar to ‘Citylights’ is it??
That song has been the best thing to enter Eurovision in the past few years. I hope Laura can come up with something as cool

I weirdly was hoping she would go full name on us in Lisbon lol. Love her either way, but I would love to see one of the Wiwibloggers drop her full name on her in an interview and get her reaction for learning it 🙂

I would like to see her perform with her piano, her piano sounds so good. Also she is so adorable!

Yeees, it would be great if she brought her piano to Lisbon

Damn, is every woman in Flanders named ‘Laura’? Because they seem to not send any named differently.

This is a sign that is late hour and you need sleep.

Haha, I live in Flanders and I know no one in real life who is called Laura. But it seems like a lot of famous singers have the name, lol. Even Belgium’s best scoring entry for junior eurovision was a Laura (Omloop). XD