Tonight’s Semi-Final 3 of Selectia Nationala rolled on from Craiova, and the results are in! For the first time, we had a tie for first place: fan favourite Xandra shared it with Italian duo Erminio Sinni & Tiziana Camelin. The third qualifier was another surprise: VYROS from Moldova.

Once again, the fate of the acts was in the hands of the jury. As usual, the national jury was made up of last year’s Eurovision yodeler Ilinca Bacila, songwriter Viorel Gavrila, rocker Marian Ionescu, guitarist Nicu Patoi and lyricist Liliana Stefan.

Have a look at who made it through to the final below:

The Italian duo came from nowhere to grab the attention of the jury, who compared them to a Sanremo act and awarded them a total of 52 points.

Xandra’s performance was praised by Ilinca, who only recommended her to add more movement in the next stage of the competition.

The Moldovan singer sailed to the final with the only Romanian language song in tonight’s heat.

Surprisingly, despite a pretty flawless vocal performance, your other favourite Elena Hasna failed to make the final.

The other six finalists, chosen by the jury from the other two semi-finals, are:

The next Romanian semi-final takes us to Turda, in a salt mine. Amongst the 12 acts who’ll be performing there is Feli, widely considered to be the biggest name in Selectia Nationala 2018 and one of the front-runners. 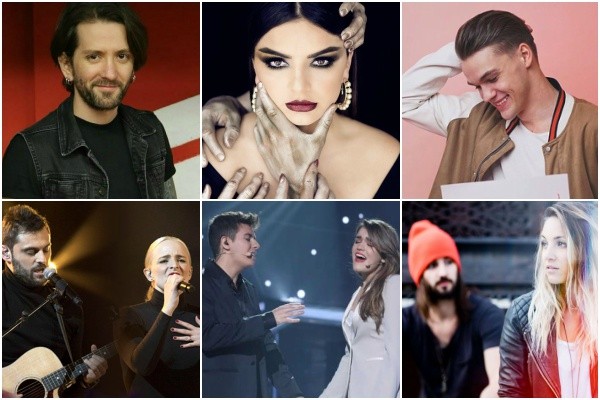 POLL: Who is your favourite Eurovision 2018 act so far? (4 February)

Xandra was my favourite of the night! The other 2 were just ok.

In my opinion the italian duo’s song is a beautiful song (80’s/90’s flashbacks) i think it will win.
Xandra was also great but her live perfomance was a little bad because of the backing vocalists.
In my opinion Elena Hasna should’ve qualified instead of VYROS.
my favourites are Alexia & Matei, Jukebox and Erminio Sinni & Tiziana Camelin

I added the full results:

Elena Hasna and Xandra had similar songs. The jury probably selected only one so that it will have better chances in final, where is public vote only.
And at this time Xandra is a safer bet than Elena Hasna. As simple as that.

So the la la la boy is the male version of ‘la la love’ (Cyprus 2012)? Well…I hope for a fun song like Feli’s one, only because this year seems sad again.

Romania, what are you doing? Elena was the best in this Semi. Her song was very emotional, I don’t understand why it’s out.

Ok, so I absolutely LOVE Try, but does anyone else get major Andorra 2006 vibes from it? :/

No Elena Hasna? No final!

Oh, I knew Romania was going to do something to shoot themselves in a foot once again. After the elimination of Johnny Baldulescu, Jessie Banes, Serena, all they needed was to eliminate Elena Hasna too. Are they actively trying to run out of good options? So far, Jukebox and Xandra are the only qualifiers with really good songs.

Xandra to Eurovision !!!! Or jukebox 🙂

Okay, so I don’t follow the Romanian NF, but really? 4 semifinals with 12 acts each? 48 seems a bit excessive considering these aren’t all exactly gems…

Not four. FIVE semis with 60 acts in total. I guess they wanted to to have their own Melodifestivalen (Melodiefestivalul?), but even Melfest has only 28 songs, and in Romania decent songwriters apparently want to stay away from anything connected with Eurovision.

It’s a special year in Romania at the moemnt so they wanna make their national selection a little more than the usual by going with this much semifinalists for Selectia Nationala.

Camelin’s name is Tiziana, not Titziana, why is everybody misspelling it everywhere?

We used the spelling provided by TVR. Thank you for pointing that out, Gianluca.

The results are correct in my opinion. Ok, maybe Vyros is a little forced there, considering that the song is quite stupid, but he was a big surprise by interpreted it well and having a nice coreography. Surprised a little that Aurel Dinca didn’t get through, considering that last week a much weaker rock song qualified, but the competition was also harder today. The Italians, fabulous as expected, I thought they could be robbed by the jury, hapilly it wasn’t the case. Elena Hasna, overrated as hell before the contest, I still miss what people saw on her that much… Read more »

Fff why isn’t there a televote in these semis? These results are a mess.

If Romania doesn’t send Walking on Water to Eurovision, I hope they won’t qualify. Serena is out, Elena (who was quite good, still not the best) is out.. That jury is just cringey. I wouldn’t be surprised if we see the first non qualification for Romania.

Unfortunatelly, we won’t send Walking on Water. I’m sure that Jukebox feat Bella will win the selection and I agree with you the jury is stupid. How is it possible to give 2 points to Elena Hasna and 10 points to Vyros with La La La. I really hope that my country won’t qualify because our stupid and corrupt jury doesn’t know how to appreciate the good songs. Maybe we will have a more competent jury next year

Agree with everything you said. It’s a pity since there are a lot of Romanian entries I like, and I don’t want Romania to break the tradition of sending good entries to the contest.

Let’s hope for the best, which in my eyes are Alexia & Matei.

Looking at the qualifiers – gahd, if this was the best that the 3rd semi offered, seems that I was right that I watched Swiss NF instead.

Romania deserves to stay in the Semis at ESC this year for not qualifying Serena and Elena.

If you come here and say that Serena and Elena are singers for Eurovision…. Let me ask you please, did you hear them live?

Elena flawless vocally but she was a statue. And serena… Uf! This chorus was horrible.

Not from Moldova(part of Romania) but from the Republic of Moldova.

This is catastrophic. Elena was my personal favourite of the whole competition and it didn’t get past the semis. Nnnnnnnnnooooooooooooo

I was also surprised that the jury didn’t help her advance to the final. She might get discouraged to try again in the future. (Hopefully not though.)

She was very fair-play and said that she doesn’t want to be advantaged by being the youngest. Her vocals are too usualy in my opinion, the song didn’t have anything ‘wow’, I still miss what so many people saw on her.

I dont know why but i quite enjoy Vyros song is fun and quite catchy to be honest.