The Wiwi Jury — our in-house panel of music unprofessionals — continues to review the 18 songs competing in Hungary’s national final A Dal 2018. Next we listen to Gergely Dánielfy with “Azt mondtad” and Odett with “Aranyhal”. Were we listening to what they had to say? Read on to find out!

Antranig: “Azt mondtad” turned into background music before a very compelling final minute brought it back to the foreground of my consciousness. It’s cute, it’s well crafted and it’s interesting but ultimately it’s also quite boring. The violin adds a lot of depth to the song but it doesn’t make it interesting enough. There is potential here but it feels unfulfilled.

Barnabas: This is literally the most Salvador-esque song in this year’s national final season, and actually there are many common points in the two performances: the simplicity of the performances, the theme of the lyrics, the stage presence — it’s a really touching experience to witness. However, I don’t see this winning the whole thing. Hungary never excelled at following trends.

Natalie: This is some serious acoustic guitar-violin work. I can’t understand a word of this, which I guess I’m thankful for, because I really like the gentle spookiness of this song. It’s the kind of song that would work really well as the background of a black-and-white silent film, it sucks your soul in and gives it a nice glass of wine. I don’t know whether it will gel with viewers across Europe, but it really struck a chord with me and I hope it does well.

Robyn: Post “Amar pelos dois”, there will be a lot of countries trying to send their own Salvador to Lisbon. Hungary isn’t doing a bad job with Gergely Dánielfy. “Azt mondtad” is a compelling song, with the Hungarian lyrics flowing among the melancholic music. But it’s missing that captivating quality that “Amar pelos dois” had, which means there’s a limit to how well it could do in Lisbon.

Sebastian: “Azt mondtad” is a sweet entry obviously heavily inspired by winning entries of year’s past at Eurovision. Five years ago, an entry such as this would have been ignored in the semi-finals at Eurovision. I’m not sure how the Salvador-effect would influence the perception of this song, but it does come across as sounding sleepy. But bonus points for its authenticity and staging.

Before calculating the average score, the highest and lowest scores are dropped. This is to remove outliers and reduce potential bias. We have removed a low of 5 and a high of 10.

Antranig: There are a lot of people on stage and they all need to be there. That will be a problem if it goes to Eurovision as only six of them can go on stage. Assuming they can work through that potential staging problem, the song itself is very enjoyable. It does feel more suited to a budding Budapest bar than the Eurovision arena but Odett has the talent to be able to take “Aranyhal” to Eurovision and produce a decent result.

Barnabas: A very safe package that is destined to those who are fond of music inspired by the sixties, so if you liked Elina and Stig in 2015, you’ll love the sassy brass section and the soft guitars. As a conclusion, I’d say that this package is actually too safe, as it doesn’t take any risk to stand out of the competition.

Natalie: A bouncy Hungarian chorus! Yay! The simplicity of the production is the strongest and weakest elements of this song. It keeps things very real and easy to follow, but at the same time makes it appear bland and unoriginal. The dance vibes are happy, and it has a charm, but I feel like it falls a bit flat. Odett’s voice doesn’t really offer anything, and it also gets quite repetitive towards the end. Nice, but not exactly a world-breaker.

Robyn: Odett is a beguiling performer, with a smoky tone to her voice. She seems more suited to a nightclub than the big arena setting of Eurovision. “Aranyhal” has loads of attitude, but it’s very repetitive and doesn’t really go anywhere. The song title translates as “goldfish”, which makes me wonder if it’s about the story of goldfish having a three-second memory. After all, a goldfish isn’t going to notice if a song is repeating!

Sebastian: The super-cute kaleidoscope of Odett’s face makes “Aranyhal” instantly memorable and likeable. It’s a slight nod to the sass given by Serbia’s Nina in 2011, or Germany’s Elaiza in 2014. But, much like those entries, this song will probably linger in the middle of the scoring ladder in A Dal. 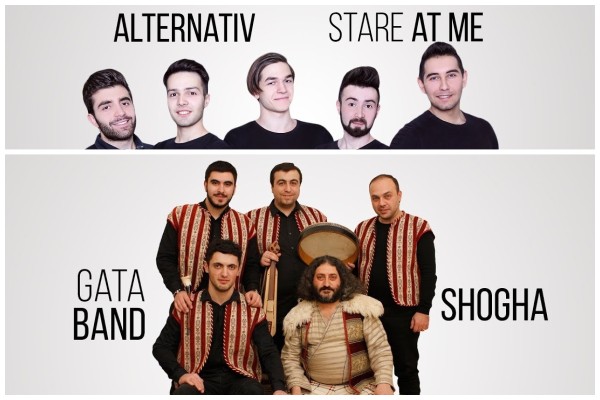 The Netherlands: Waylon to present 5 songs — and one for Eurovision — on nightly chat show

Gergely Dánielfy: I didn’t expect to like that at all. It started really slowly, but the live performance was excellent! I enjoyed all 3 minutes. Whatever he was singing I felt it for sure. One of the best performances!
7/10

Odett: It sounds fresh, nice melody but the performance is underwhelming for me.
6/10

Azt mondtad: Pretty good. The guitar makes me think that some bullfighting is going to break out during the performance. Is that Andy Roll on the guitar or is just everyone allowing their dads to perform at A Dal this year?

Aranyhal: One of the most inauthentic songs I have heard for a long time. Definitely does not suit Odett and she looks really uncomfortable up there.

Azt montdad: When Salvador finally gets a haircut and starts taking his anti-seizure medications (5/10)

Azt mondtad is not a bad song but sending it after APD would be…. a choice. I hope it won’t win.

Azt Mondtad would be my favourite if AWS wouldn’t be competing. A beautiful song…. I really feel the lyrics eventhough I don’t know hungarian. Wouldn’t mind this winning (but I still want AWS xD) 9/10

Atz Mondtad – 10/10 – This song has everything: A compelling melody, an unusual, but effective build-up, beautiful lyrics and a chillingly good violin. Definitely my favorite to win A-dal and if so, one of my favorites in this year line-up.