The Wiwi Jury — our in-house panel of music unprofessionals — has settled into Armenia and has been busy touring the country. Today’s stop was a visit to the iconic Sardarapat Memorial, a lasting symbol of the Battle of Sardarapat and ultimately, the country’s declaration of independence in 1918. As the Wiwi Jury examined the two winged oxen flanking either side of the structure, we also examined two more Eurovision hopefuls.

Today’s acts included two female soloists. One served up a modern electronic pop effort while the other delivered a ballad with shades of acoustic country music. Did either of them impress the Wiwi Jury?

Antranig: In an alternate universe where Tamar Kaprelian didn’t exist, this would be the song Armenia should send to Eurovision. There are some enunciation issues that are very obvious in the studio version which will need to be ironed out. However, the electronic pop drop follows current trends but manages to be unique. That’s ultimately a sign of great songwriting and “Heartbeat” has plenty of staging potential. Angel is my dark horse to win Depi Evratesil.

Jonathan: Both Angel’s aesthetic and song feel very cool and on-trend. Instantly better than the barrage of similar style songs we get at Latvia’s Supernova, there’s an intrigue to “Heartbeat” that makes you want to know where it’s going next. I do worry about her live pronunciation, as there are a number of lines of the studio version that are very unclear lyrically. But if she puts some modern, edgy staging with this, it could reach the Depi Evratesil final.

Luis: “Heartbeat” has all the ingredients to become a hot mess: constant changes of pace, a mish-mash of melodies and dodgy lyrics. Despite that, it somehow works: it’s listenable and I’m sure the clubs in Yerevan will love this. For Eurovision, however, it lacks precision and memorability.

Bernardo: Not bad but not particularly good. While “Hearbeat” is a hot mess, Angel’s vocals seem interesting (even if part of them are clearly autotuned). The song can grow a little bit live but as it is, it lacks structure and drive. There’s no story here and it goes nowhere.

Robyn: There’s a lot going on here, some good, some not so good. “Heartbeat” has a modern electronic sound, but in many places, it sounds like the producers would have been better off using a few less digital effects. The song also seems reliant on autotune for Angel’s vocals, which suggests she might not be up to performing it live. It will be interesting to see how it comes across live.

Deban: “Heartbeat” is full of cluttered ideas and lacks memorability for the right reasons. Angel sings like she’s got blocked sinuses, and without getting a sense of where this is going visually, the frantic shift in pace makes this a hot mess.

Before calculating the average score, the highest and lowest scores are dropped. This is to remove outliers and reduce potential bias. We have removed a low of 2.5 and a high of 9.5.

Lusine Mardanyan — “If You Don’t Walk Me Home”

“If You Don’t Walk Me Home” reviews

Chris: “If You Don’t Walk Me Home” succeeds where many of the Depi Evratesil songs fail: it makes you want to listen all the way through. It’s not an original concept, but Lusine’s vocal and songwriting skills do lift it. Likely to get lost because of the style (unfortunately), but a nice little gem.

Robyn: A song like this wouldn’t have been out of place in the late 1990s, when girls with acoustic guitars were big. The guitar in this song dominates, to the point where it’s almost a duet between the voice and the guitar. But it kind of works, and there’s potential it would come across well on stage.

Bogdan: You would be forgiven if you mistook Lusine Mardanyan for an American country artist, as she clearly draws her influences from this genre. She isn’t a Jewel wannabe however, as she makes the song her own with her distinctive voice and sensitivity. Whether or not she would get lost on a big Eurovision stage is irrelevant at this point. As a standalone track, “If You Don’t Walk Me Home” is brilliant.

Cinan: Another good ballad song with a beautiful voice, very different actually. When I heard it at first I immediately thought about Lady Gaga’s “Joanne” song (which I LOVE). Normally I don’t listen to many ballad songs, but this one I would buy on iTunes and listen to it as many times as I want.

Natalie: Tamar teaches her students well. Lusine has some real talent and capability here. Even with such simple instruments and lyrics, the emotions are so real and intoxicating. And those ethnic elements make it come so alive. Lusine’s voice is so youthful and enchanting too. Sure, it’s a bit samey and might appear boring, but for such a new artist, Lusine might be one to watch.

Edd: Lusine has a beautifully delicate voice which fits perfectly with this sweet acoustic production and dreamy harmonies. The only issue is that by having such a stripped back production, the lyrics are left very exposed — and the lyrics are disappointingly mediocre. 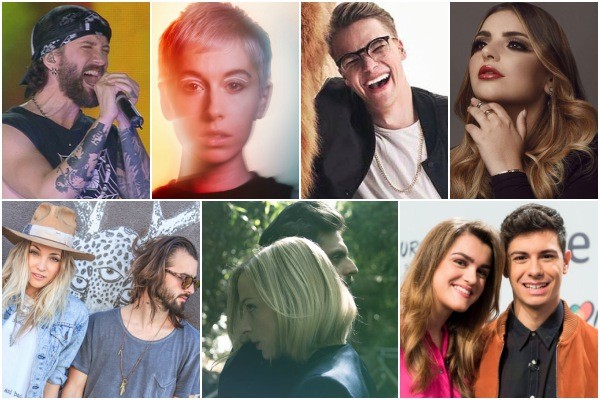 POLL: Who is your favourite Eurovision 2018 act so far? (8 February) “Heartbeat” has Euroclub banger potential with a minor revamp!

Heartbeat has moments of greatness but it needs some deep polishing. 7/10
If You Don’t Walk Me Home is a nice song but it’s sooo boring. Three minute song felt like it was 5 minutes 5.5/10