The Wiwi Jury — our in-house panel of music unprofessionals reviews the eight acts who will be competing in the andra chansen round of Melodifestivalen 2018. Next we take a look at YouTube star Olivia Eliasson and her song “Never Learn”. Did we learn anything from her entry? Read on to find out!

Anthony: Despite the potential of this well-produced pop ballad, Olivia eventually loses momentum and finds herself charming her way throughout. It’s less “aah” with all these “ooh”s and Lithuania’s Silvija Pankunaite does a better job at it. From someone who’s more used to cover versions, Olivia’s done well to reach this far as a newcomer — but she’ll need to step up a gear.

Chris: The question here is: does the weak song mean Olivia never gets a chance to shine… or as a performer, is she not strong enough to lift it? Because there’s something seriously off-kilter here. If either the track or Olivia had more attitude, this might have a kick. Instead, it’s all down to her 90s rave dancers, and that only gets you so far.

Josh: “Never Learn” screams filler more than Kylie Jenner’s lips. Every year, Melfest needs to include a cookie cutter basic pop song sung by a pretty blonde. Olivia has a nice vocal that complements the backing track well, and the fluorescent breakdancers introduce a fun and funky element, but it’s almost like SVT will never learn that these formulaic, predictable entries will never go anywhere. They’re simply just there.

Luis: Here’s the mandatory ‘Lisa Ajax-esque’ entry from Melodifestivalen 2018. There’s nothing particularly interesting about “Never Learn”. It doesn’t disturb, it doesn’t create any impact… this song is somewhere between an album filler and a random clothes shop background tune. Is it wrong that it made it to Andra Chansen? Not really, but it should not go further by any means.

Natalie: This is a really cool modern pop ballad, it’s got really sweet production and cute girly lyrics. I should adore this, but somehow there are lots of things that are deeply irritating. Olivia’s voice… is the same heavy huskiness that plagues radios these days, and her elocution is terrible. Also there are way too many “ooh”s in this song. And the chorus just seems a mess of random electronic sounds that get boring and repetitive very easily. Like many Melfest 2018 songs, this should be much better than it is.

William: Building a song around the hook ooo shows a total lack of creativity. That sets the tone for this utterly forgettable song, which comes with a weak hook and a repetitive chorus. The blaring horns don’t fit with the overly produced electro backing, and there isn’t much of a message to grasp onto either. Ultimately this feels as languid as the slow-mo sequences, which are the only memorable aspect of an entry that shouldn’t have made the semis to begin with. 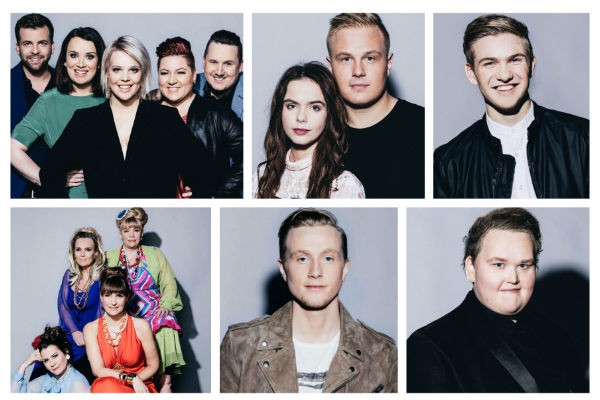 Poll: Who should win Iceland’s Söngvakeppnin 2018? You Wiwi guys are such haters… this is a jewel of a song, a perfect ditty. I hum the hook, I can imagine singing that line in real situations and I do not cringe at the lyrics as I do with the belabored “Patrick Swayze”. Yep, it is a bit simplistic, but in a wonderful concise way. This is an 8 in my book.

Gurl, Lisa Ajax’s songs are much better than this. This is completely mediocre. She is so cute and lovely though and this is basically the reason I’m happy she made it to Andra Chansen. Renaida will probably beat her though.

It’s just ok. Not really bad, not really good. I like the chorus. Probably in my least favourites in A.C. round.

Comparing this to Lisa Ajax is insulting for Lisa Ajax…

Depends. Which Lisa Ajax entry are we talking about?

Lisa’s Mello tracks were much stronger than this

I really like this song, it’s very good and catchy, but I have some issues
– She ain’t paralized, the first minute feels very weird when she’s just standing
– When she keeps moving her microphone up and down when she’s “ooh”ing I can’t even. Can’t she just stick it in one place ?
– Her ups aren’t very good

Apart from this it’s a great song. Sadly, we’ll probably not see her in the final, since Renaida is the big favourite (and my this year’s favourite), but I’m glad she’s in AC

Oooooo…..I’ll never learn …..This song because it’s not good and the chorus is so bad. Mitt paradis should have gone through over this.
A 4.5/10.

i actually like it!
not as a winner but just as a song i’d listen to casually

Remember the bad staging more than the nondescript song. When I read the AC qualifiers, I automatically assumed that she was the singer of “Break That Chain” since I had completely dismissed the chances of this song coming anything other than 7th in its semi-final. I was wrong….or more accurately, the Swedish public was. This is a terrible entry.

Hahahahahah clothing shop music, exactly what I thought when I first heard this. Accepting the fact that Swedes didn’t appreciate Icarus (my favorite of this year), I realty can’t get how Olivia made it instead of Elias. He had a better song, a better performance and people seemed to enjoy it way more.
Renaida will have an easy win in AC.

There’s a slight inaccuracy in Josh’s review, Kylie Jenner just overlines her lips because it’s an insecurity of hers, she’s had no lip injections 😉

That’s what she wants you to believe lmao that lipless ho ain’t fooling no one.

Boo. She admitted to the fillers.