Montenegro’s search for their Eurovision 2018 act saw them return to a national selection for the first time in ten years. Vanja Radovanovic won with his traditional Balkan ballad, “Inje”. Now, a little under a month later, we’ve got the final version of the track — and the music video too.

There’s not a huge amount of changes to the song on first listen, admittedly. There’s more instrumentation before the first chorus, giving a greater “build” to the track.

It’s a similar story with the music video, which uses some stunning locations of Montenegro. Vanja comes to the aid of his love interest, even appearing to fly at one point of the video. It helps to tell the bittersweet story of love that the song’s lyrics touch on.

35 year old Vanja started his music career back in 2004, winning “Best Debutant” at the Budva Music Festival. He’s regularly released music since then, even forming his own band in 2007.

In 2006, he participated in Serbia’s Beovizija. He didn’t make it to the (now infamous) final, only managing 21st with “Kad me jednom za te ne bude”.

What do you think of the version of “Inje”? Do you think Montenegro can make their return to the final for the first time since 2015? Let us know your thoughts in the comments section below! 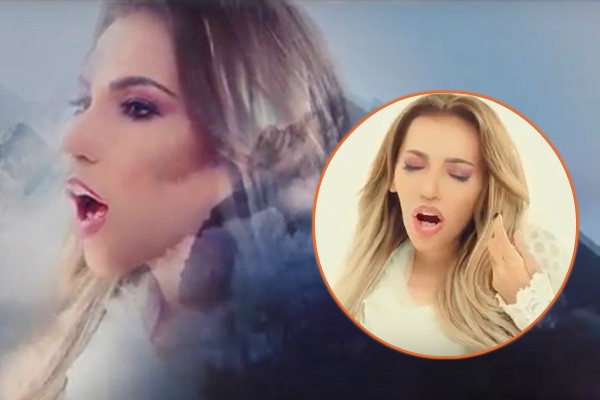 Russia: Julia Samoylova will sing “I Won’t Break” at Eurovision 2018 This song needs more love in my opinion – this Canadian understands not a single word of it, but I feel the drama! It’s currently my fave at the moment.

It’s my cup of tea and I like it a lot. It’s dramatic with a bit Balkan twist at the beginning, melody is good and his voice is great, except for the peak “haaa” and at the very end, which I found something’s missing something (may be his vibrato?).
Overall I like this. I gave this 9/10 points. The rest depends on his stage performance.

Montenegro the most underrated country in Eurovision Song Contest.

Montenegro is better with their style & national/native language than county who send Cheap English with Generic pop song.

Agree. It’s underrated and I hope this would be the dark house if the stage performance is right.

In a weak semi with Serbia and Croatia…. they stand a fair chance.

Croatia is in the semi 1

I really like this song. Contender or not; it’s just fine. The Montenegrin landscapes are beautiful.

Excellent work.
Montenegro getting back to what they do well. Will surprise everyone when it qualifies.

I think this will pull a Highway and come surprisingly close to qualifying (if not even sneak into the final) on the night.

This is Euphoria compared to Highway. It’s a decent Balkan ballad that will likely qualify from a semi that’s not well received.

I like it but it doesnt pull me in like some Balkan ballads have the magic of being able to do. I dont see it qualifying but it’s not terrible.

Ugh! I so wish Nina Petkovic had won instead and was going to be Montenegro’s entry. Her song ‘Disem’ is amazing and I think would have got to the final. It was fresh, current and a cut above all of the other Montenegrin entries. Vanja’s entry has been heard before so many times, snooze fest!

Ieva has won for Lithuania! We have a full line-up with names!

I don’t notice any difference. It is just a typical old fashioned Balkan Ballad. The most boring entry this year.

OFF Topic – : BULGARIA
[email protected] will fly the flag for Bulgaria in Lisbon! The song “Bones” will be presented tomorrow morning at 07:30 CET. Follow the social media of Equinox and BNT Eurovision Bulgaria to find out who hinds “in to the unknown” and to listen to “Bones” first!

Let’s see what they’ve got.

Shoot, I just wanted to report this. Anyways at least it’ll be heard in the early morning so that the long wait will be finally over.

I’m starting to like the song more than previously. It fulfills the niche of a “Balkan ballad” nicely, and it’s certainly MUCH less embarrassing for Montenegro than their two previous entries, and it’s in That Southern Slavic Language with 20 Names… and I guess I need to move it higher in my list of faves.

still nothing about Malta’s song. this is so unfair

Since I heard it at a better quality than the videos from Montevizija, I actually started to really like it. The remastering of course doesn’t change that. Montenegro is near my top 10 this year (just outside of it I think). Always have loved Balkan ballads. Serbia and Montenegro are my favorites this year from the ex-Yugoslav countries. None is bad though.

Let’s get Montenegro back in the grand final this year! 🙂

I actually agree with you!
However, you haven’t mentioned who should NOT qualify. We’re going to have 43 finalists!

Great song, great video! I was a fan of this song since it came out and said how a slight power-up would do wonders and it really did! The video is like a cross between Beauty and the Beast and Anna Karenina and it adds mysticism and romance. Vanja is handsome and has a great voice. Everything here works like a clock and I am really hoping this will do better than people expect and reach finals in Lisbon. Best of luck!

Well… That’s gone up in my rankings… It has given me chills and goosebumps. Very good improvement and nice to hear it in a better quality. If Montenegro can bring it live, I would happily see this in the final. Good Job!!!

Wont do much change however. It is still destined to be near the bottom of barrel. A flat song.

I already liked it before the revamp. Now I love it! It’s much better. (balkan ballad lover here!) The instrumentation gives meaning and identity to the song. I like the beginning and how it builds up to the pre chours and the chorus. I love how he sings the first chorus almost a capella and then he repeats it with a strogner way. What they needed was a polished version with more instrumentation and making the song less flat. And they did it! Also, as a romantic personality, I absolutely loved this music video! However, please Vanja don’t dress up… Read more »

I really like this song. It is very underrated in my opinion by the majority of the fandom. A Balkan ballad at it’s best!

This could surprise and qualify. I personally wouldn’t be disappointed by this.

Well, this is your typical Balkan ballad and I like it. They know that they need to sing in their language because any English version of a Eurovision Balkan ballad EVER made the whole thing atrocious. But in any Balkan language it sounds like the song has depth and soul.

THEY CONT CHANGE NOTHING, I THEY PUT SOME ARAM MP3 ELECTRONIC EFECTS OR UK 2017 . BUT BUT BUT

Am I the only one who thinks this “revamp” sounds the same as it did before? I would rather say that Inje has been remastered…
In any case, although this lacks the power that Adio had, I think this is a borderline qualifier and I hope Vanja makes it to the final. The video looks expensive and we’ll produced so kudos to the Montenegrin team.

I’ve never been a fan of Balkan ballad, but this could be much better… Montenegro 2014 and 2015 did well, I even liked them, especially Sergej.

I think they did a great job with the revamp. I like the build up!

I can’t decide if it’s dated or timeless. I’ve always had a weak spot for Balkan ballads though, and like this one too. I like the build-up to the dramatic end.

What a great revamp! I thought something was missing in the original version but now it’s definitely there. Way to go, I hope to see Montenegro in the final!

I’m one of the very few people actually love this song. I liked the music video as well. Best wishes to Vanja, I hope he gets lucky in semis.

I read that Vanja was born in capital city of Serbia, Belgrade.

Don’t you know that half of Belgradians are actually Montenegrins? 😛

There are more Montenegrins in Belgrade than in Montenegro itself

I’m surprised Vanja is 35; I thought he was much younger than that! He has a certain “baby-face” charm about him. Clearly some good genes in the Radovanovic family. =) Anyway, that aside, the problem with “Inje” is that it’s a bit too…..flat. The instruments pick up in volume in the second half but there’s never any real climax or sense of drama. They deserve credit for sending something traditional, and I wouldn’t begrudge them a shock qualification, but Balkan ballads have been done better than this in the past. I think they’ll be overshadowed by their big sister Serbia… Read more »

You can say whatever you want, but as a Montenegrian I feel SO proud listening to this song. The instrumental, his voice, lyrics, VIDEO, everything’s just so good. Now I may be biased, but this truly deserves its place in the final. All they need to do now is to create an epic staging and this can do miracles. IDEMO VANJA!

I’m a sucker for Balkan ballads and this Montenegro is amazing this year!! Maybe not as good as Adio but still brilliant!!
Good luck from the UK

Crno i belo
Reply to  Comi

I really hope he gets to the final and does well. I love to see Montenegro return to using its language and exhibiting its wonderful musical culture.

“Do you think Montenegro can make their return to the final for the first time since 2005?” I’m sure you meant 2015

Aha, good spot! Thanks – fixed that one 🙂

And will you make an article about the music video from Malta?
Love Inje, very underrated!