She’s the Swedish staging supremo, who masterminded multiple Eurovision 2017 performances and has worked with international stars including Zara Larsson. And now Sacha Jean-Baptiste has the next credit for her resumé: Eleni Foureira’s performance of “Fuego” for Cyprus at the Eurovision Song Contest 2018.

The news was announced through Jean Batptiste Group‘s Instagram page this evening, revealing that rehearsals started today. Although there are no details for the performance yet, we can expect a suitably impressive show from Sacha Jean.

Sacha was reported as the creative director for Cyprus 2018 by INFEGreece in January, but this is the first actual confirmation of involvement.

??EUROVISION TIMES?? We are MAD excited to announce that we are creating the performance for Cyprus this year working with Miss FIERCE @foureira with the song “FUEGO”. ???????? 1st day of rehearsal ?? • • • #creativedirector #choreographer #artisticdirector #live #stage #eurovision

As well as choreographing opening and interval acts, SJB also led creative direction for several competing acts, including LIAMOO who placed sixth in the final in Stockholm.

SJB directed four performances for the Eurovision Song Contest 2017, three of which made it to the grand final: Australia, Armenia and Bulgaria.

Bulgaria’s Kristian Kostov came runner-up on the night in Kyiv. His performance was dark, moody and atmospheric. It also featured heavy use of visual effects.

Australia’s simpler show, focused around a lazy Susan, placed a respectable ninth on the night.

Armenia’s Artsvik, who had an extremely impressive show, only managed to place eighteenth at the close of voting.

Are you excited to see what SJB does with the stage show? Let us know your thoughts in the comments below! 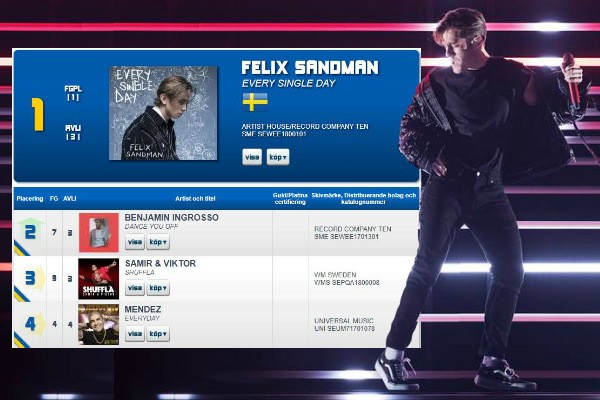 Sweden: Melodifestivalen 2018 songs dominate the charts as FELIX SANDMAN enjoys a second week at number one Was the right choice in the end! She outdid herself! Fuego staging was one of the best ever in Eurovision history! (so…Sacha I forgive you for Alter Ego staging- I did not like that at all)

She’s a talented director for sure. However, no matter how good you are you must have the right material to work on. In this case, I think she can help “Fuego” stand out.

I am not happy to read that SJB is staging Fuego. Why would anyone hire her after Australia in 2016 and Malta in 2016? Walk on Water could have had amazing staging but it was absolute crap.

Whoops, that should read Australia in 2017.

Guys please NO ONE CARES about your videos of personal tops. Stop it.

she is SO overrated!! why countries keep hiring her??
she always keeps the staging way too simple and dark. like brooke in Malta, the dark and moody staging didn’t fit her happy song at all. and isaiah’s staging last year was just so strange

Fuego’s staging should have a lot of dancers and life on stage, which i am sure sacha is not going to give it…. such a shame

She did a great job with Armenia and Georgia in 2016 and Bulgaria 2017, but Georgia, Australia and Armenia in 2017 were lazy……Let’s see what she is going to do this year…

My favorites were Iveta’s and Kristian’s performances. She’s always done kind of dark stagings for melodic or dramatic songs. I guess it will be interesting to see what they will bring to the Eurovision stage

I like his work, he’s movie and theater director, so I guess staging will have some kind of ”dramatic plot”. Also, costumes will create Bosnian fashion designer Selma Berisalic-Starfinger (she created costume for Maya Sar- Bosnia 2012.)

Fokas is so much better than Sacha.

I think she is the best in business together with Hans Pannecoucke and Fokas Evaggelinos. So, I say good job Cyprus.

Wiwibloggs, do you have an updated list of stage directors for this year?

BTW- I wanted to add Marvin Dietmann to the list above as he did ‘Rise Like a Phoenix’, but then decided not to include him as he also did ‘Perfect Life’.

Germany had good enough staging last year, it was the actual song that let them down. Austria 2014 had a simple show that still remains with me four years on.

I disagree, the song was bad, but staging was worse.

Smoke, fire and the changing of camera angles are her thing.
Love Wave 2.0, perhaps.

It should be something as fierce as Iveta’s performance was. Or maybe a burning car?

Choices! Jean Baptiste has nothing to do with Fureira’s high energy performances. Having said that, I am curious to see what will this come to. Sometimes being skeptical and consecutively being proven wrong is not that bad of an experience.

More of the same, big whoop.

? don’t trust her. She simply does dark entries, just watch them on YouTube. Eleni is a bomb on stage, i am praying that she will do something amazing

Of course…. How original…

Did she do Jana Burceska’s “Dance Alone” stage setup? If she did, I would find someone else if I were Eleni. Can’t risk it in a country that is rarely expected to be a contender.

That was Ambra Succi.

don’t count on her though lolol look what she did to our entry last year, isaiah was turning on a circle and had selfies in the background copied straight from all her other productions she worked on. and georgia :/

Some of her work is good…some not so much!
Brooke’s staging was rubbish but Liamoo had a good one.
Maybe it depends on how much artistic freedom she is given.

I love her work. They’re very slick. She innovates and doesn’t always rely on the same tricks. Hopefully she will think of something amazing for Fuego because it’s one of my favourite songs this year.

Nice work if you can get it….

Problem is that she’s representing Cyprus, not Greece.

Had she been representing Greece, Eleni would be a contender for top 5.

Representing Cyprus, she’ll suffer from the same stigma small countries have suffered from in recent years. Also, the Greek vote will be split between her and Yianna.

In recent years, Greece does well when Cyprus fails to make the final, or marginally makes the final. You have to go way back to 2004 to see them both in the top 10.

@Ern…last year Cyprus finished 5th in the semi while Greece barely qualified and in 2016, Greece failed to qualify to the final while Cyprus was in the final. So, nope

Eleni will have this as an obstacle.

You’re forgetting something- Eleni has a LOT more star power than Yianna. She and Jessica are easily the most famous and commercially successful artists taking part this year. Eleni has a fair number of fans across Europe that Yianna doesn’t.

If they’re not rapid nationalists, which most of them aren’t, the Greek diaspora will likely gravitate more to her than to someone less familiar. Besides, she could try to employ the Albanian diaspora as well.

Of course Yianna is far more likely to do better with the juries.

I can’t imagine it will be unless she flops terribly. Demy still seems to be doing well and I think Eleni will place higher than 19th. Tons of Greek artists have represented Cyprus and vice versa without their careers suffering in their home country.

This was meant as a reply to Jo.

No pay no gain

Which art director would you suggest?

I think she’s good, but not “that” good. She basically recycled elements from past performances for Georgia last year. Cyprus 2016 is another example, I think her work didn’t capture what “Alter Ego” required.
Hans Pannecoucke, who directed for N’lands 2014 and Spain 2017 is also pretty good.

But Hans is too expensive?

I’m mostly worried about her vocal abilities. I am sure the staging will be very good.

I would like to kindly ask if you could put a number or something behind “Anita” because otherwise I would get confused with you and I have already quite a lot of comments out here. Thanks in advance Kind Regards from Anita

Have you heard the song?

Vocal abilities don’t appear to be necessary to sing Fuego.

I’m not worried – in 2016 Iveta already prooved that you don’t have to have good voice to do well, having sexy legs and good backing vocalist is enough. Catchy song and stunning staging also helped.

Iveta sang quite well. She’s not a belter but she did a fine job.

Trust me – Iveta didn’t sing well (imo), she was off key and her voice sounded unpleasant to my ears. But thanks to her backing vocalists it wasn’t noticeable. Still, I understand that this is just my opinion and taste and that I might be a minority. –
p.s. But she did show quite sexy legs and gorgeous hair.

She’s overrated. Some of her projects are indeed great, but there are also some pretty mediocre work. But I guess it’s a money issue.

LOL…Eleni will advertise anything, just look at the Fuego video. Hey why not, if someone paid me to advertise bananas, I totally would.