Europe’s most extravagant national selection drew to a spectacular conclusion last Saturday. And almost a week later, the impact of Melodifestivalen 2018 can still be felt.

The latest Sverigetopplistan countdown suggests that the nation is at peak Mello mania. The top 100 singles list contains 21 of the 28 competing entries from this year’s contest. Of these, 15 are inside the top 40, 11 inside the top 20, and seven inside the top ten.

And for the second week running, a Melfest song holds the number one spot.

After debuting at #9 two weeks ago, FELIX SANDMAN “Every Single Day” holds on to the #1 position. He slowly built up traction from semi-final 4 through to Andra Chansen to the final. Alas, he fell at the last hurdle and ultimately finished second.

Of course, Benjamin Ingrosso was the man who beat him in the race to Lisbon. But when it comes to record sales the “Dance You Off” hitmaker must make do with #2. Nonetheless, this marks a new career chart peak for Sweden’s Eurovision 2018 representative.

Samir & Viktor “Shuffla” and Mendez “Everyday” are non-movers at #3 and #4 respectively. Meanwhile, Margaret “In My Cabana”, LIAMOO “Last Breath” and John Lundvik “My Turn” complete the top ten at #8, #9, and #10. This is the first time both Margaret and John have cracked the top ten.

Elsewhere, Rolandz “Fuldans”, Mariette “For You”, Renaida “All The Feels” and Jessica Andersson “Party Voice” break the top 20.

At #27, Martin Almgren “A Bitter Lullaby” is the lowest charting finalist.

The Andra Chansen casualties are still hanging on. Olivia Eliasson “Never Learn”, Moncho “Cuba Libre” and Sigrid Bernson “Patrick Swayze” are all inside the top 40. And in some good news, in its fifth week of release, Mimi Werner “Songburning” makes its chart debut, albeit at #91.

The lower reaches of the chart also sees appearances from a number of acts which were knocked out during the semi-finals — Dotter, Kamferdrops, Edward Blom, Elias Abbas and Ida Redig.

What do you think of Melfest’s dominance of the charts? Was this year better than some people claim? And should FELIX have won? Let us know in the comments below. 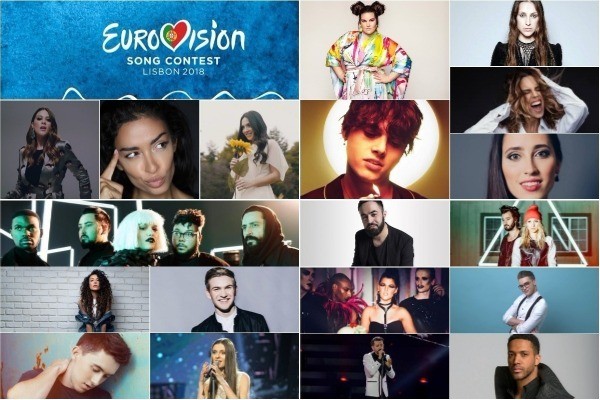 I hope Felix will go to Lissabon whith his friend Benjamin. Perhaps they go to wiwisparty together in Lisabon? And Benjamin need someone that sing Whitney him at the show in the background. : )

From Russia with gloves

Interesting to note that the rise in sales of Felix and Benjamin’s songs coincide with the highest demand for state funded hearing tests. #justsaying

I’m glad the performers are making money but chart success does not mean they are good songs. The obsession with chart success or sounding like music on UK radio is such a narrow way to rate a song. I want more diversity.

Felix Sandman should have won, good song and good staging. That’s all I have to say about this.

im so glad “every single day” is doing so good, this song deserves more recognition

“2) He by far has the strongest song in semi final 2, which is certainly the weaker semi”

Strongest “song”? Nuh uh. Not at all.

Great news for Sweden. Melfest isn’t just to find a mini song contest designed for selecting an ESC entry but also a big platform for local artists to showcase their music. We live in an age where across the globe local charts are dominated by American music. Having Melfest in Sweden will remind Swedes to appreciate and support their homegrown music more.

azaad
Reply to  Charli Cheer Up

That’s a huge part of its success IMO.

Somewhat better than 2017 and 2015 (and earlier), but worse than 2016, although that final got fewer viewers. Dahlander for the official MelFest blog suggests this year’s songs were ‘too radio friendly’ for casual viewers and dedicated fans. Perhaps they simply didn’t fit the TV format, he writes. I dunno, they certainly tried a lot of new things this year. More novelty acts, a high contrast visual identity, politically relevant interval acts, less ironic comedy, etc. And with Munshi as new director and with Björkman’s succesor Gunnarsson given more responsibility, mistakes are bound to be made. What I’m most worried… Read more »

I agree completely. 🙂
Didn’t mean to sound so negative, and I don’t think I did tbh.

Huh? Mattias wrote a very detailed and thoughtful comment, even citing outside sources, and your response is “omg” and a put-down…..

Strange how the andra chanson songs are doing so well.
Wonder why they didn’t qualify direct to final.

Because people vote for the show and not for the song.

Mendez do well on the chart because it is not live. Wien he sang first time in his did not sound good, and he had a cold at the final.
Wien you listen at it on the radio there are no problems whith the voice. And the public did not care and he got third highest score from the viewer. But the internationella juryn only gave him four point all together. Probably because hus voice.

Dan
Reply to  Marcus (Day One)

More exposure. The songs which qualified to Andra Chansen were available on iTunes and YouTube straightaway. And then we saw the performances again (and again in the case of Renaida).

Some people are probably going to think I’m crazy but I think Benjamin could win Eurovision because: 1) He won both the televote and jury vote at Melfest and the last two people to do that were Loreen and Mans Zelmerlow (and we all know what happened to them) 2) He by far has the strongest song in semi final 2, which is certainly the weaker semi 3) The juries will rank it very highly cuz it’s modern and radio-friendly 4) His staging is very unique and will be appreciated by both juries and televoters 5) Christer Bjorkman is one… Read more »

Not really, it’s a tough year with no clear winner which can sometimes result in an above average song winning (the overall performance is pretty cool though). When your staging is that amazing televoters can overlook the song, and the juries will eat this up too! So if some of the stronger entries flop live and Benjamin has a good position in the running order, Sweden could be in with a chance.

You are funny:)).. Benjamin is totally sweetheart, but his song is not that good …even Bjorkman cant make it win….lol…though i think he will be in top 5 for sure…

No, I agree with you. You are not crazy. Top 3 is very likely. Dont fall for the ESC queer elite propaganda. You know the same crew that every year boosts Frances entry that then almost always comes like 25th….

Benjamin will do great

I believe Benjamin or Australia will win this year. Both have televote and jury appeal, although I like some of the other songs, they are outliers to only one part of the equation (Toy –> televote, Estonia –> Jury). For example under the old weight system for 2016, Australia would’ve won as they appealed to both sections while Ukraine and Russia tend to favor televotes.

We’ll see in May, but Sweden is in prime position, especially if they get 2nd half in the grand final

Perhaps juries will appreciate Toy as an original entry (and a very good one) and Netta as an amazing performer and vocalist
This is not Sweden’s year, for sure

The problem is that it’s easily the most divisive song this year.

When has a song like “Toy ever been close to winning in the jury era? Yers there was the babushkas who only got second due to massive televoting, I predict something similar for Toy
I doubt juries will fancy a woman imitating a chicken. But televoters likes crazy circus acts so ot will do well

Agree with Benjamin and Swedens’ chances. Love the Australian song but the live performance is still unknown….so I have my doubts…

Not saying Sweden will win but if we’re being superstitious it’s not a stretch. This year seems to parallel 2011 which had an underwhelming winner (though I don’t mind “Dance You Off”)! It’s been three years since their last win and there was a thee year gap between “Heroes” and “Euphoria”. Also the last time they performed in the second half of the second semi final was in 2015. It’s still a bit of a reach but the idea of Petra hosting again is enough to for me to get behind this theory!

Måns and Loreen won their televote in a landslide. Benjamin didn’t. He was actually 4th with the heartbeats votes.
And Dance You Off is not the most successful song from this Melfest in Sweden (Heroes and Euphoria were)
Benjamin is not as strong performer as Måns and Loreen. And if Måns couldn’t win the televote, I don’t think Benjamin could do it.
And Dance You Off is what everyone expects from Sweden which means less impact with televote for the voting.

You could also say hadnt it been for the app it would have been a landslide win for Ingrosso.The app doesn’t really do anything. All it does is to prevent a run away winner. Any difference will be thanks to jury. You could also say Loren and Måns won because they had no real competition. It was all about them, being surrounded by lesser songs. There were no contenders. That’s why they won with landslide wins. Ingrosso had some fair competetion with like 4 other contenders and still managed to win both jury and televoting Yes it might be what… Read more »

An ordinary televoter don’t think like a typical eurovision-fan. Just saying. A good act is a good act.

Sweden is still in it!
The odds have it still firmly in Top 10 and in such a diverse year anything is possible. I’d say there are about 15 songs with realistic possibility of winning.