Bulgaria finally revealed their entry for Eurovision 2018 on March 12 — unleashing the fab five supergroup Equinox with the song “Bones”. Since then the band have remained much like their profiles in the video clip — mysterious and hidden.

But with Tuesday’s vernal equinox they finally broke their silence. The day marks the moment the Sun crosses the celestial equator — the imaginary line in the sky above the Earth’s equator, splitting the length of day and night into equal halves. It has spurred a new energy into the cryptic quintet, with each member revealing more about themselves, the song and their involvement in the band.

Trey Campbell, a singer and songwriter from Los Angeles in the United States, jointly composed “Bones” alongside Borislav Milanov, Joacim Persson and Dag Lundberg. He describes performing in Eurovision as “an honour”, and is hoping to raise the profile of the contest in the United States.

Identifying strongly with the song’s hook, he describes “Bones” he says the number transcends the physical side of love.

“[It’s about] loving someone beyond everything that you may see. Especially in these times, it is important to be looking deeper, to be caring deeper, to be caring about things that are not necessarily just of the physical. [“Bones”] should inspire people just to be more loving. If you love someone despite what what they look like or what their skin colour may be, you are actually loving the person — the human — first and foremost.”

Meet Trey Campbell, also known by his Bulgarian name Traycho Kamburov. He is 1/5 of the band @EquinoxBulgaria, who will represent #Bulgaria at #Eurovision 2018 in #Lisbon ?? He is an American singer/songwriter from LA and one of the composers of #Bones ?? @Eurovision @LogoTV pic.twitter.com/hQzcV5MzGv

Johnny Manuel, who was approached by songwriter Borislav Milanov after his audition of Whitney Houston’s “I Have Nothing” on America’s Got Talent went viral last year, has immersed himself in Bulgarian culture. He has praised Bulgarian hospitality and inclusiveness, as both himself and Trey are from the United States.

He became a viral sensation after his @AGT performance of "I Have Nothing" by Whitney Houston. Now the American artist @JohnnyManuel will be part of #Bulgaria's entry at #Eurovision 2018 @EquinoxBulgaria, with the song #Bones! #AllAboard @eurovision @LogoTV pic.twitter.com/NXV03IchCp

Vlado Mihailov is a Bulgarian singer and actor who, since 2004, has fronted the bands Safo and Slang. He also performed as a backing singer for Kristian Kostov in Kyiv last year. Despite joining the Equinox project after the song was written and largely produced, he praised the Bulgarian entry as a multi-faceted project.

“I think [“Bones”] has more than one message — there are so many hidden messages in it. It’s about love that’s so strong that it transcends material things. [The love] goes ‘beyond the bones’.”

“It becomes that much stronger because it is being covered by different people — all different from one another.”

Singer, songwriter, actor and father of three! Meet @VladdiMusic, who is one of the Bulgarian artists that will perform under the name @EquinoxBulgaria in #Lisbon! ?? Vladdi was also part of #TeamKris in Kyiv! Full interview: https://t.co/mli0tTcGC1 #Eurovision pic.twitter.com/AZHUJcX19N

Bulgarian Georgi Simeonov, who goes by the nickname ‘JJ’, has music all throughout his bones – spreading his talents as a musician, singer, songwriter, vocal coach and producer. Much like his compatriot Vlado, JJ feels that “Bones” showcases the growing tolerance and acceptance of his home country.

“The message of our project is to show that Bulgaria is a place where we live together with different religion, with different cultures, and we are open to the world.”

Meet Georgi Simeonov – @itsJJofficial! JJ is experienced musician, singer, songwriter, vocal coach and producer. He is an ex-boy band member, or as we all like to call it ex-"common framework" member! ?? @EquinoxBulgaria #Eurovision #Bulgaria pic.twitter.com/9IcfiRffzi

Zhana Bergendorf is no doubt the heart of Equinox. having won X Factor Bulgaria in 2013 and having appeared on our wishlist for Bulgaria back in 2016. She said she “lost her mind” when composer Milanov told her that she would be a part of the Eurovision contest. She identifies strongly with “Bones” — particularly its message of strength and love.

“We are all a strong, strong family if we are together. We all need to love each other, we all need to help each other and to give a hand – because love is love.”

Meet Zhana @Bergendorff_, the X Factor Bulgaria 2013 winner, mother and one of the most succesful Bulgarian female artists in recent years. She is the wild spirit of @EquinoxBulgaria and she just joined #Twitter. ???????, ????! #Eurovision #Bulgaria pic.twitter.com/ek8jWbj7H2 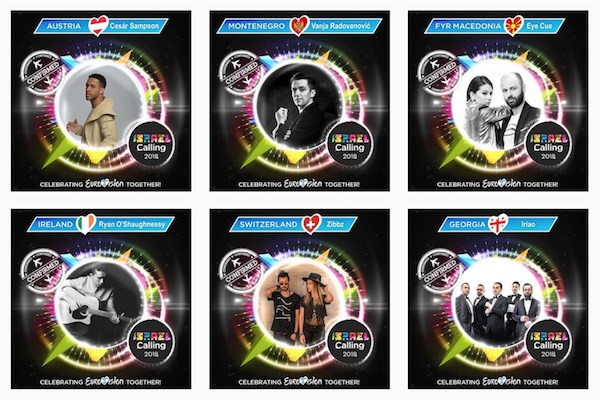 Love this article!! Bones is very underrated. Enjoyed learning more about the performers

I see what you did there Bulgaria !!! 😀
Wanna pick up the American diaspora votes hahha nice strategy!
But the song is great though and if you really going to do fifth element staging you will blown away the Israeli chicken

It was a strong moment but the song was way different and Bones will require alot more in terms of staging to connect with the public , when you have an up best song it’s a lot more easy to do that. I still believe that the-best is yet to come and Bulgaria will present it’s best entry this may on the live stage. This is one of the reasons why they kept the ideas they had for the official video for the staging and the lyrics will be all that we gonna have. 5th element hype anyone??

This is a masterpiece. I have started to expect that from Milanov and company (aka Symphonix). They really raise the bar and now for a third year in a row bring something fresh, ethnic, modern and perfectly executed. They took a risk with Kristian last year, and bet that he will be able to withstand the pressure and deliver a very difficult song and demanding performance as if he is a seasoned professional. And he did. This year they bring a group created specifically for ESC and a complex, unique song that covers a very difficult subject–love beyond the physical… Read more »

I don’t like these “made for Eurovision” entries. The song is good, but it could be performed by one singer or duo.

I don’t understand who decided that it was a good idea to put together randomly artists who were total strangers to one another. Plus all of them look seriously uncharismatic.

Are you by coincidence greek?

I think it is not a strong family but a mysterious one – that’s how they introduced the song – long long wait and teaser-hype – and the picture above shows that it is a mysterious family – they don’t look at each other, everyone of them looks into space. There is no love of bones and flesh and blood – but all love beyond… Maybe if you don’t have a flesh, blood and bone connection than you need 5 people to build up a strong field. I like the song – really. I don’t like this “untouchable” (beautiful mess)… Read more »

So pretentious. This song would have been cool for one or two singers, but not for a project made group. Who the hell are they going to be a strong family if they didn’t even know each other some weeks ago? Equinox is a product, nothing more. I also don’t understand why Bulgaria has accepted two Americans who doesn’t have any Bulgarian roots.

A good product, and a bad song! If you squeeze too much, your pants will look not pleasant!

They are trying to hard to make their song look like a masterpiece which it obviously isn’t.

I agree, it is a very good song but by no means a masterpiece.

I’m from the USA,and I love eurovision,and this year BULGARIA is my Winner,Again??
I love how dark and misterious the song is!!
If they nail the staging I’m pretty sure they with end up in the top 5,at least.
Hope #Sofia2019

Is like Equinox could be the American representant, right? Almost a half of the group is American! 🙂

hahaha Hector you must hate them so much to write the same thing so many times – I think they are amazing, the concept is mysterious, interesting, haunting, the song is magical and gives me goosebumps, the message is out of this world beautiful. I don’t care if they will win or not – it’s just a show. Imma download that song and listen on repeat! Have a good day – hate makes you old, it’s not healthy!

I love their song. It’s my favorite with Israel and Sweden.

How can Bulgaria send Zhana to Eurovision after all she’s done?

What did she do?

Concept ”5th element” is quite cool actually 🙂 Very curious to see their performance.

Their concept is audacious, cogent and larger-than-life. This is what I always wanted for Eurovision to be. Whether it works is ofc unclear as of yet.

Its my favourite! (after Portugal)

Such a lovely message. Their voices are amazing, their staging would slay, the song is so mysterious, beautiful and powerful,prepare yourself for that slayage!!!!

They are just so unique as a group, they bring something that I don’t think Eurovision has ever seen — it might be too out there for some people, but I see them as a total dark horse — not quite in my top 5 as of now, but definitely in the top 10 and rising — the more I listen to it, the more I love it! Johnny is such a talent and I’m so glad that once AGT didn’t work out to his ultimate goal, that he was snapped up for this project — wishing them the best!