Get those devil horns up and jump into the moshpit! This year’s Eurovision is heavy on musical diversity, and as part of that we’re rocking out to a handful of acts that give the contest a harder edge. Five entries fall under the category of rock — among the broadest musical genres out there. Now that we have a critical mass, it’s time to have a listen and choose your favourite.

The rise of rock at modern-day Eurovision began with 2005’s contest in Ukraine, where both Norway’s Wig Wam and Switzerland’s Vanilla Ninja secured decent placings in the grand final. Perhaps the biggest breakthrough came one year later, when Finnish heavy metal heroes Lordi won the competition with the iconic “Hard Rock Hallelujah”. Over the past 12 years several good rock entries have managed to score well in the aftermath of the Finnish triumph. But in the past three years no rock entry has managed to reach the Top 15 in the grand final. (In 2014 Softengine secured a well-deserved 11th in Copenhagen). Will this year’s entries reverse the tide?

The Netherlands: Waylon — “Outlaw In ‘Em”

Since their return to the grand final in 2013, the Dutch have been taking Eurovision very seriously. And they’re doing it again with Waylon from The Common Linnets, who is returning as a solo act.

His country-rock song mixes Nashville with Texas Lightning, all delivered with his raspy and striking voice. Is it mimicry or is it original? You decide.

Hungary doesn’t follow a musical pattern at Eurovision. From Euro-club friendly dance numbers to ballads about peace to mystical numbers with Romani flair, they send very different songs every year. Enter post-hardcore band AWS, who barely made it to the A Dal super final with the jury, but went on to win the televote with their metalcore banger “Viszlát Nyár”.

An uplifting song with a distinct anthemic quality, “Mall” comes with a definite rock undertone. Albania is yearning for Eugent Bushpepa to end their streak of non-qualifications. He’s in a semi-final full of fan favourites. Will it be a case of rock on…or rock away baby?

Romania is aiming to maintain their 100% qualification streak, and their hopes are carried by surprise Selectia Nationala winners The Humans.

Lead vocalist Cristina Caramarcu is definitely a contender for Eurovision’s Next Top Model, but the bookies still “don’t see the beauty that surrounds them everywhere” and predict a non-qualification at the moment. Will Romania prove them wrong?

This brother and sister duo build their song around the anti-bullying aphorism, “sticks and stones may break my bones, but words will never hurt me.” More indie rock than hardcore, it straddles rock and pop and lets lead singer Corinne show off her sexy, raspy voice.

CLICK HERE TO VOTE IN MORE OF OUR EUROVISION 2018 POLLS Malta: Ira Losco debuts “One In A Million” — the first single from her upcoming double LP 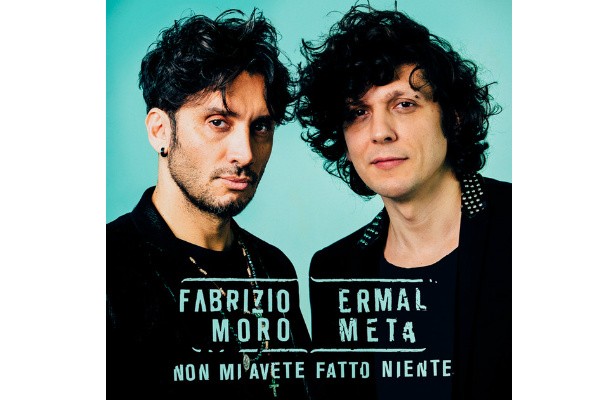 Hungary is the only rock song in the competition and it is good enough to win if the rock public gets behind them.The pop vote will be spread between maybe 25 acts so if it’s to be a rock year we need unity.VOTE HUNGARY?

WAYLON THE NETHERLANDS BY FAR!!!
THE BEST SONG OF THE YEAR!!!!

Netherlands by far. The strongest and the most unique. Albania, Switzerland and Romania are good too, but they are not so strong. Personally I like them all, but they don’t stand out with anything, so it’s hard to think they will impress in Lisbon. Sadly, Switzerland and Albania will most probably not be in the final. Hungary is the worst by far, it has uniqueness for Eurovision, but the interpreter is too amateurish. A good voice could do something with a song on that style, but not him. I don’t think that Hungary will reach the final this year.

Romania and Switzerland and Albania are my favorites.

You must listen to this live version before casting your vote!

I believe Hungary’s song is the definition of rock music, though it’s more heavy rock.

My favourites are Albania and the Netherlands.

Here is the Live performance of Eugen’s at The voice Kids:
https://youtu.be/aqifn5OpbCs

Eugent killed those high notes. Albania is my winner!

It became my #2 after watching this live performance! His voice is out of this world! Speechless! If he doesn’t make it to the final, I’m seriously not gonna watch Eurovision anymore..

First LIVE impression of Mall from Eugent Bushpepa after the release of the new version
https://www.youtube.com/watch?v=aqifn5OpbCs

By far Hungary! I also like Switzerland, Albania and Netherlands. Romania is a snooze.

This year is so diverse that even withing the rock genre, we have such varieties:
Hungary – rock/metal
Netherlands – rock/country
Albania – rock/pop
Romania – rock/pop
Switzerland – mainstream rock

Hungary and y’all will seethe when it slays the televote.

1. Netherlands. Enough said – a song that makes even me like country deserves a special award. 2. Albania – the revamp didn’t destroy the song, but I need to hear it live, even before the revamp the studio version was weak and live version amazing 3. Switzerland – it’s a good song, but since the nf I started to like it less and less. 4. Hungary – this song brings me an athmosphere of open-air festival at like 11 am when I’m at the beer tent and in the distance I hear the first band of the day that… Read more »

This video has better quality: https://www.youtube.com/watch?v=eDRByA_vEVw

I really do not know what to vote. All these songs apart from Romania are in my top 10!!!!!

I watched the video on YT. Even though the quality is not good, you can clearly appreciate how beautiful his performance was. And WHAT A VOICE. He’s awesome performing live, that’s why I think he’ll make it to the final despite many people underrating his song!

Albaniaaaa
For me Mall is the most beautiful song this year!! Eugent is my winner!!!
I also love Outlaw in’ em and it’s in my personal top 3!!!

Personally, I would also count Italy as rock…

I would say that is specific Italian San Remo style pop, it has some influence indeed, but not rock..

Albania has the best rock song of this Eurovision (and one of the best songs overall). I also voted for the Netherlands and I’m excited to see Hungary making some people pull their hair out in Lisbon. 😛

NO ONE, NIUNA, NIENTE, NINGUNA

Hungary all the way, my vote for AWS <3
(One of the few contestants who I think that I will follow and after finished esc).

I only like Albania and Eugent this year 🙂 Maybe this is just my mood but I do not want to be itchy and angry (Hungary), I do no want to be stuck in time (Romania, and I hated Roxette decades ago),I do not connect to Switzerland (this is not even rock for me) and a country rock is not my cup of tea for every day consumption (I love Houston rodeo and paid extra to see Sheryl Crow but its appeal stops for me beyond Texan borders). So Eugent please for me

No doubts here: AWS!! I looooove their song. 🙂 It kind of gives me Linking Park vibes…

I wouldn’t consider Albania’s entry to be rock, as much as it is folk rock. Don’t get me wrong, since I really like it, but if we’re talking rock/metal/metalcore, Hungary has my vote. It’s a FANTASTIC song.

All those are rock subgenres, including folk rock.

I love the Romanian song “GOODBYE”. It has drama and a journey a touch of lesibian love and standing strong in the face of a wind machine. It stands out as a bit different. Love the lyrics and is one on my most listened to songs of this years contest. I even had a tear in my eye when it popped up unexpectedly.

“Mall” – one of first songs released this year also remains on of my favourites and I’m not tired of listening to it.

MALL all the way….

Even with the bad quality of the video, oh my goodness!!!! His voice is OUT OF THIS WORLD! I’ve never heard such a power and flawlessness! Is he even real? And he is the only singer I’ve heard, whose live versions are 100 better than the studio version! That voice would break the recording equipments I guess 😛 Love it! Thank you so much for sharing it!

Thanks for the link! Great performance!

Here is the high quality video of his live performance:

The Bondi hipsters from Switzerland are not rock…

you can all call them various sub-genres, but, I agree, only Hungary and Netherlands are giving me real rock vibe here.

Hungary is hard-rock / metal.
Switzerland is pop-rock.
The least rock song in the group is the Netherlands. It’s more country than anything else. But it does have some rock elements.

Edit: Switzerland is indie-rock.
Something like Artic Monkeys or Franz Ferdinand.

Where I can watch this? 😮

I gave votes to all lol. Every of them is in my Top 10. We have great rock songs this year and I hope, next year we will see more rock in Budapest.

Lolololol “more rock in BUDAPEST”
You made me laugh, I liked your certainty. (It’s not ironic)

Hungary. By a landslide.

Albania all the way! The most beautiful, meaningful song and Eugent has the most amazing voice ever! Rock on!

I really want Switzerland to qualify.

Hungary is more metal than rock. Netherlands is more country than rock.
Albania and Romania both have way too long intros. So my points to Swiss band.

Albania’s intro is not long anymore, after the revamp.

I’ll vote for Switzerland, Hungary & The Netherlands. I don’t like Albania & Romania at all

Svizzera!!
Romania is also decent. About Holland… I am not into country music very much. Even less metal, talking about Hungary. And Albania is a “neither”. Not that bad. Not that good.

In my opinion Switzerland has one of the best entries this year. I wouldn’t be surprised if this finished top 10 in May.

You should be happy if they qualify at all, since they are in a very strong semi final.

Hard choice! I love rock songs and I’m sooo happy they’ll appear this year on the ESC stage! Albania and Hungary are in my top 3, so I voted for them. I like Waylon veeeery much also. Romania is OK. “Stones” is not my favourite, but it doesn’t bother me too.

The aphorism being referenced by Switzerland is NOT “sticks and stones may break my bones”, but rather “those who live in glass houses should not throw stones” … the idea being that such people are setting themselves up for catastrophe if they start a spate of rock-throwing to which they, themselves, are extremely vulnerable. That works quite well with their lyrics, which describe a great number of general modern behavior failures, but clearly include themselves among the guilty parties, before repeating that they aren’t throwing stones. As for the poll, all of these songs except Romania are in my top… Read more »

I really think Romania is under-rated.

Albania (Finally loving it again after the revamp, but still not as much as I loved it BEFORE) and Romania (For all its faults (and lyrically/stylistically, there are PLENTY) , Cristina brings an authenticity and honesty to the emotions behind the lyrics that make it work, and I think it may do better than people think (but just getting out of it’s semi and qualifying to the Final will be an achievement)