He’s the enfant terrible of French fashion who served as creative director of Hermès for seven years and designed Madonna’s iconic conical bra.

And now Jean-Paul Gaultier will design the stage costumes for France’s Eurovision 2018 act Madame Monsieur when they perform “Mercy” in Libson.

The acclaimed couturier approached Madame Monsieur after they appeared on talkshow 20:30h le dimanche in January.

Madame Monsieur’s Emilie revealed all to French journalist Fabien Randanne, a writer with 20Minutes.fr and one of our favourite Frenchies.

“Jean-Paul Gaultier fell into our arms in the dressing rooms! He told us he had followed us in Destination Eurovision, that he loved our look and our song. There were a lot of behind the scenes discussions and he told us, ‘If you’re happy, I’d love to dress you for Eurovision.’

“We didn’t dare believe it, but our teams got in touch. And a few days later we found ourselves in his workshops in Paris, for him to take our measurements.”

Fan of Madame Monsieur’s look – all black with pops of red – can rest easy.

“He told us, ‘I understand you have a very well defined look, we will try to work on it without distorting who you are, we will stick with what you’ve built so far,'” Emilie adds.

Fittings begin next week. The final outfits, however, won’t be seen until rehearsals in Lisbon in May.

Gaultier has an extensive association with the Eurovision Song Contest.

Other Eurovision credits include Amina (France 1991) and Anna Vissi (Greece 2006).

Gaultier has also commentated on the contest, providing coverage of Eurovision 2008 for France 3, alongside Julien Lepers.

Madame Monsieur have two upcoming promo appearances at Eurovision In Concert in Amsterdam and Eurovision Spain PreParty in Madrid. 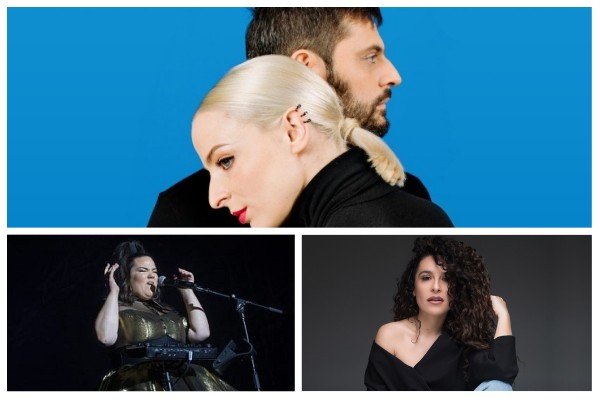 All these hate comments saying, virtually, the same thing over and over are literally coming from the same IP address. We see you, girl!

There is nothing “superficial” about being well dressed on the night of the final, or all candidates are superficial. Everyone wants to give the best image of their country and dress accordingly. Should they come with an accordion and a baguette under their arms to be authentic French credible to you? Why should they stay in their usual outfit to sing “Mercy” if Jamala wears a pretty dress to sing “1944”? Did ABBA wore Napoleonic war clothes to sing “Waterloo”?

I, too, work with refugees, which makes your judgment despicable all the more incomprehensible. “Mercy” represents a unique opportunity to defend refugees in front of billions of viewers, it’s a much bigger impact than any assembly, any government, in front of which you also have to get dressed to go talk. And you denigrate the group and their message just because you do not like Jean-Paul Gaultier. It was normal for the delegation to communicate on its presence, every year they say who dresses our candidates. Amandine Bourgeois wore a dress signed Jean-Claude Jitrois, etc … This year is Gaultier,… Read more »

Yeah, it sort of cheapens their whole humanitarian message…

Good for them, but how do they even have money for that.. it must cost a fortune to have your stage costumes designed and made by JPG

It’s not going to cost them a cent. The great couturirers regularly lend outfits, for example when movie stars or singers go to a prize-giving ceremony. and then when the photos appear in the press it is written “The actress is dressed by Chanel, wears Cartier jewels, is made up by L’oreal” … it makes the advertisement to all these marks at the same time.

Oh ok, I thought he was going to design outfits especially for them? If it’s just borrowing then it is more understandable, although I didn’t know Eurovision was so prestigeious as to big designers would want to advertise here.. the more you know 😉

I don’t see how it makes them “false and superficial”. It wasn’t them who went to get Gaultier, it ‘s he who offered them his services because he liked this duet and this song. In the name of what should they refuse? They represents France, Gaultier is a French fashion designer, and he knows Eurovision very well. and they will still be in something sober. Just because the song is about refugees, does not mean that they don’t have to be well dressed for the final, which will be broadcast to billions of people? When Jamala sang “1944” the theme… Read more »

I see Jean-Paul is a big ESC-fan! Oh, and also he and Conchita are BFF, by the way 🙂

JPG is savvy enough to know the earnestness of the song and the singers – I trust he’ll only increase the songs chances of success. Relax people – he’s only manning outfits because he likes ESC.

You are right. I didn’t expected this from MM.

43 countries and of them all, France decided to work with expensive designer. So much about helping refugees and disappearing behind the song wearing black. They need a fancy designer to create another black outfit. Probably a ”19th century widow” like Norma John.

lmao at some comments here.

The german Ann Sophie went for all black staging for song Black Smoke……….and that was a great idea…….it sure grabbed everyone’s attention

I’m not in favour of this decision, because in the interview, they said they would stick with the trademark black outfit as to make themselves ‘anonymous’, because the focus is on the song and its message rather than the artists. I do hope the new design doesn’t result in something too flashy and is something simple and in the style of Madame Monsieur.

Actually, economic status is irrelevant when it comes to refugees. The people desperate enough to flee Syria are not “poor”, they are a broad range of social rungs – from dentists to schoolteachers to grocers to chief executives. Many of them lived quite comfortably in their old lives, perhaps some of them even owned Jean Paul Gautier outfits, but had to leave them back home in shreds along with the rest of their lives.

Any excuse to hate on MM right? The song is just about a little girl saved on the mediterannean sea, nothing else…
You’re a pathetic excuse for a human being…

Jean-Paul Gaultier?! Even I know the name – and I pretty much live under the rock when it comes to fashion. I’m really courious what the final outfits will look like.

Yes! This is a brilliant decision. I am exciting to see how JPG adds his fabulous touch to this poignant song

Nah. she can works on it. It was her first live performance of the song. I think it was ok

I was worried for a moment because I want them to stay true to their style. But I understand they’ll keep it in a way so I’m confident Gaultier will do a great job!

He also dressed the hosts in 2008. in Belgrade on all 3 nights if I recall correctly.

It is all about grabbing the media moment. C’est tout.

Meanwhile Estonia is still struggling to fund the projection dress.

I see no need to change their outfits. It’s sophisticated and classy.

Well I hope this won’t ruin Madame Monsieur’s chance of winning the contest. I don’t know much about Mr. Gaultier but I am wary when it comes to surprising constumes during the actual Eurovision night (beep beep Gabbani). Regardless, best of luck to all pf them.

I am from Asia and I am not into fashion in the first place. Do you think I have to care about that throughout my entire life? You can’t even spell Gaultier right lol.

For me is very weird that Madame Monsieur sing about refugees in their eurovision song , and for that kind of song they will wear on eurovision stage, expensive clothes from designer JPG.

refugees and expensive clothing are not connected entities, may that’s why??? idk

Who designed Dana International’s dress for her actual performance of Diva?

I know he designed the famous colorful feathery one that she wore for the reprise, but did he also design the grey one she wore earlier?

No, he only designed his winner dress.

Life is a drag
Reply to  So

I Love this idea.
Will they still be in black?
Bone chance Neigbors love your entry.

Great news, I love his designs! However, Madame Monsieur’s outfits are very simple and it really works so I hope they won’t exaggerate and will keep it simple. By the way didn’t he also dress Les Fatals Picards in 2007?

Fun or ban?
Reply to  stommie

Truth be told
Reply to  stommie

lol for real? Most them were hideous.

I thought they wanted to remain completely in black and completely anonymous-looking. How much can you do within those perimeters?

Andy
Reply to  Truth be told

I’m assuming it’s going to be the replica of the same outfit but made by Jean-Paul Gauliter, but seeing he also dressed Mede in 2013, maybe they will go wild?