It has become an annual tradition for Germany to host its own Eurovision show in the run-up to the contest, with panelists ranking this year’s entries. And in the first songcheck the countries of the first half of the first semi-final as well as host country Portugal received their scores. And after all scores were in, Netta came out on top.

At the end of the show, the hosts also reacted to the recent news that Conchita Wurst has come out as HIV-positive. They praised her Instagram post and sent their best regards to Austria.

The 2018 programme marks the first time where the expert panel includes new personalities. Along with the usual faces such as Germany’s commentator Peter Urban and radio host Thomas Mohr, we also heard from Levina, drag queen Olivia Jones and our very own William Lee Adams and Deban Aderemi.

In what’s considered a wide-open race, the panel’s scores somewhat mirror the bookies’ favourites — at the top anyway. Israel’s Netta sits at the top of the scoreboard with a score of 8.9, followed closely by Czech Republic (8.7) and Bulgaria (8.4). A bit further back in fourth we find Belgium with a 7.2.

Host nation Portugal finds themselves in a respectable fifth position — with a score of 6.8. Interestingly, Estonia’s Elina — who has consistently been near the top of the bookies’ rankings — is only 7th here, with a score of 6.6. 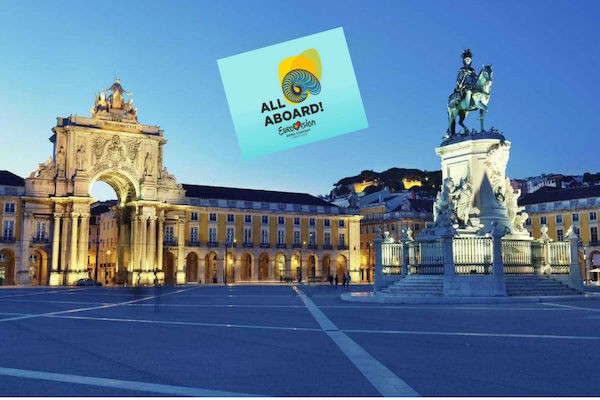 Eurovision Village Lisbon: Terreiro do Paço welcomes Beatbombers on May 4 Poll: Which returning artist is your favourite at Eurovision 2018?

Actually the scores above are not those of the expert panel, but of the audience. The experts apparently didn’t even give any points, unless you count the hosts as experts.

People’s negativity and comments here is so disgusting. Everyone’s entitled to their opinion yet the way people describe their feelings towards the Israeli ranking makes me wonder what truly stands behind it. Is it gelousy? Bitterness? Or perhaps both?

I’ve decided to focus on the viewers scores as they’re probably more of an indication to what the German audience thinks!

Omg Lithuania is at high place, I am pleasantly surprised omg omg omg.

From the viewers, yes. But the hosts hated it and gave it 1 and 3 points.

Too quick to judge. If the contest was only about the song , we wouldn’t need a live performace. But lots of things will change till the live performaces. I am hoping for some suprises this year.

Nothing is for sure! Israel may be the (run-away?) favorite right now, but clearly it all comes down to the performances in Lisbon as you said!

Who cares? Opinions are like polls and odds, just for fun. In Norway´s preview Netta got second, why are you not covering that instead of yet another attempt to already crown her the winner?

We’re covering the German programme because I’m closely following it and as native German can provide all the information needed. Also to point out that this is the first year that the songcheck is covered on Wiwibloggs. I’ll also be writing about the three other shows to come in the next days, so it’s not there just to provide another positive headline for the Israeli representative!

What’s your problem mate? Why are so concerned aboiut this specific coverage? There is a variety of opinions all of which are legitimate of course

Well, they put Iceland at #11 so everyone chill

Last year Italy won this poll by a miles and “My turn” were infront of Portugal and Bulgaria.It’s pretty random.

Italy topped a lot of rankings prior to the contest. They got 6 of the Top 10 right and 16 of their top 20 qualified, so it’s not that random. At least not more random than any other fan/blogger ranking.

I’m pretty sure the 8.9 vote is from the viewers at home, regular germans not just the “6 random people”.

The scores taken into account are the ones given by the viewers, not the so-called expert panel!

How is it that no one is talking about Israel on the official YouTube account, yet Israel is all over wiwibloggs.

The Eurovision Jury are from all over Europe and Australia; not just German.

When did I say that the Eurovision juries were just German? Israel is consistently doing well in Eurovision preview shows and these shows can imitate how jurors from these countries will vote.

Yes thats why Israel have 14 million viewers only in the eurovision channle alone wile the rest of the countries have 2 million…Mark keep envy.

Mark really??? Are u blind? I see everywhere in youtube reactoins only to the israeli song ..all over the world..so stop with your pathetic lies!! By the way “toy” is now the formal song of zomba classes. 🙂

IF
Reply to  Mark

Yes, Mark, evidently you dislike the Israeli song. Here’s what you can do – don’t vote for it! Simple. You keep complaining and moaning and moaning again. Enough. We get the picture. Time for you to move on. Stop searching all sites where Israel is or is not leading in polls. Surely you have better things to do with your life. Or perhaps you don’t??:)

Yeah, Estonia is just really polarising… In the Chat section I saw like 50% who thought it was terrible and the other half loved it. I gave it 12 Points, but obviously it didn’t help 😀 I’m glad that Czechia and Bulgaria scored so high… About Israel: Whatever, I know everybody loves it and at this Point, I accept the Hype. May it win if you want…

I personally prefer 40 other songs over Israel’s song.

I literally couldn’t stand Salvadors performance last year and it won. Sometimes the winner is not what you like.

Huh. Save for Estonia I mostly agree with their scores.

For all those who don’t speak German, in the first video William and Deban show up at 3:22 minute and they are the only one who speak English 🙂

haha, thanks for flagging that!