Following their victory at Destination Eurovision, Madame Monsieur have traveled Europe sharing their message of perseverance and hope with their Eurovision 2018 track “Mercy”. From London to Tel Aviv, they’re shining a light on the migration crisis — and in one of the most beautiful ways possible.

And now the duo — which consists of husband-and-wife vocalist Émilie Satt and producer Jean-Karl Lucas — have released their debut studio album”Vu d’ici” (Seen from here).

The fourteen songs that comprise the album could be seen as fourteen stories.  The title “Vu d’ici” suggests true events and real-life dramas, just like the child protagonist born on a refugee boat in “Mercy”. Consequently, the album feels incredibly personal. Most of the songs were already recorded way before the song contest, allowing for clarity of thought and something authentic to the duo. Given they had finished most of the songs prior to winning the French selection, there wasn’t that much to finish in recent months. Instead they’ve used the time to tweak and fine-tune, creating a proper masterpiece. They are here to stay. They are here to slay!

Speaking to us at Israel Calling, Madame said:

“It’s a little bit like the Mercy song. It’s our words and melodies talking about what surrounds us. There’s always a little story in the big one to make things become more human.”

During their interview with us in London, Émilie said that she does most of the songwriting and Jean-Karl is responsible for the production.

The album opens with “Comme une reine”, an uptempo track spreading a message of tolerance and self-acceptance accompanied by a tropical house beat.

One of the standouts is the track “22.11.2013”. In the song, Émilie sings about a bad romance. The song takes a stripped back approach, reminding us that less is more…when you’ve got a voice like E!

The album features inspiring messages, yet sounds fresh and uplifting. They manage to keep the spirit of Mercy throughout the entire album. However, the combination of beats straight from the Tropics with French electropop creates a unique aura that doesn’t get repetitive.

What do you think about Madame Monsieur’s new album “Vu d’ici”? Which songs do you have on repeat? Tell us in the comment section below! 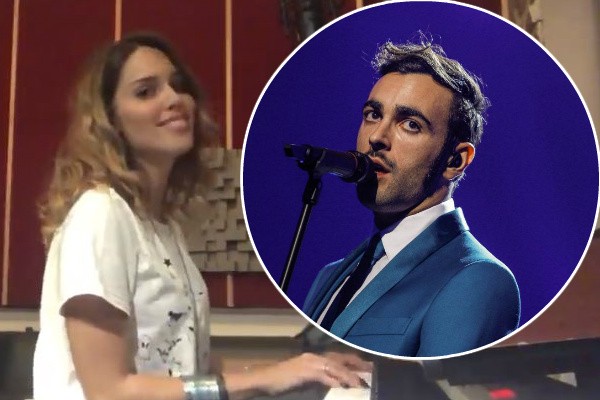 And they just took over Sweden in the betting odds and now they are 6th favourite to win. Their total youtube views for Mercy also just passed 10M.

No matter what the result is, I think Netta and MM will use this as a stepping stone for greater heights.

Voters in eastern Europe and the Balkans will kill its chances, unfortunately

That’s what we thought about Conchita in 2014.

I agree with you! The highest contender to win this year is France or Israel in my opinion

Madame Monsieur wins the “Eurovision 2018 artist/s with best recent album” for me. Any artists would like to top that? I am eyeing on either Melovin or Alekseev.

There aren’t many artists that I follow after the contest, very few achieve to catch my interest, but the ones I follow tend to be really catchy. Madame monsieur is a group I could think of, and you bet I’ll continue to follow their success post Eurovision.

^Another random insult, using another Mask. Mods to delete.

I love how French Eurovision participants always have an album ready to go with their participation, and since Amir none of them has disappointed!

Haven’t heard the album yet, but I’m going to do it during the weekend. So proud of them! So happy I discovered Madame Monsieur. All the best for their career. And I hope to see them win!

Definitely something to do on a great weekend, you’ll enjoy the album for sure!

I absolutely love it when artists bring more of the music to the table before the competition. It totally shows their status as true performers and not a one song wonder.

A big news today! Mercy was found by journalists of the French radio “France Inter”. On the photo published on social networks, the girl looks healthy. She lives with her mother in a migrant camp in Sicily.

I’m so happy to hear that! One day, she’s going to learn about the Eurovision song she helped to inspire

Please change the styling for once! Those lipstick and hairtyle are so milked already!

I love the elctro pop “vibe” but it’s still “clever songs”. Emilie’s voice is so gentle. The wait was worth it, I love it. It’s so hard to pick a favourite, maybe Ne me laisse pas, Au-delà, Des baisers and Pour ceux qu’on aime. I enjoy all of their tracks. Good job MM. :3

their first was named tandem, right?

Tandem is an Ep (Extended Play), Vu d’ici is their first album.

10 tracks is a ‘Long Player’ or LP – an ‘Extended Play’ or EP is at maximum 8 tracks. ‘Tandem’ is listed everywhere as an album or LP – and I’ve never before seen it referred to as an EP. Tandem was their first, or debut album.

They themselves called it an EP and from what I’ve read on French media, most pages refered to Vu d’ici as the debut album!

OHHH Such a good album!!!

Madame Monsieur pointed out that Tandem was an EP only and this is their proper debut album. Check their Twitter account / French media for reference!

It’s an amazing album! I’ve just finished playing listening to all of it and I loved every track. So much so, that I’ve added all of the album to my French music playlist – masterpiece.