She’s paid her dues and made the whole world scream “halleloo”. Now, RuPaul’s Drag Race star Shangela will be bringing her talents to a Eurovision audience as well. She’s been confirmed as one half of the US commentators for this year’s contest, alongside Drag Race judge Ross Matthews.

For the third year running, American broadcaster Logo will broadcast the Grand Final of Eurovision. They’ll be streaming the contest live on their website and on YouTube.

Shangela takes over the reigns from Michelle Visage, who formed the commentary team alongside Ross last year. She also hoped to do so again this year. Unfortunately, this year’s final clashes with RuPaul’s DragCon, making Michelle unavailable after all.

But given that she said “hands down” that Sweden’s Robin Bengtsson should have won last year, missing out on Portugal might not be too bad for her.

And after All Stars 3 — where she werked the runway and challenges throughout the season — Shangela is keeping up appearances. She’s also got a starring role in the upcoming Hurricane Bianca 2: From Russia With Hate. Let’s hope there’ll be some more intercontinental love in the commentary, y’all!

Shangela’s not the only Drag Race queen who’s been getting in the Eurovision mood. Former winner Jinkx Monsoon recently shared the video to Netta’s “Toy” over on her Facebook.

And eagle-eyed fans report that Shangela posted about the song on her Instagram Story during a recent trip to Israel. Could Netta have already shantayed in to Shangela’s good books?

Of course, today’s news might not be totally well received. Many fans in the US have complained about the restrictions Logo’s broadcasting puts on their access to the songs after the contest. Hopefully, those geo-restrictions may have sashayed away this year.

What do you think of Shangela taking over the reigns? Are you looking forward to hearing her and Ross’ take on the songs? Let us know all your thoughts in the comments section below. 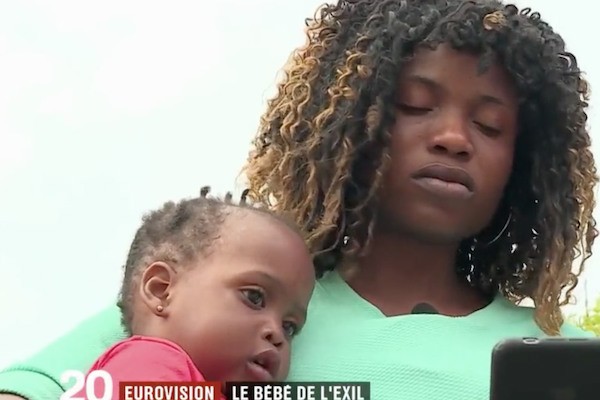 Oh,and I’m very disappointed that Michelle won’t co-host with Ross again this year. It was a far better show than 2016. With Shangela, i fear it’s gonna be 2016 all over again.

I don’t use a VPN to watch the Semifinals here in the USA. I use the firstonetv website.
It lets me watch any channel I want anywhere in the world and it’s completely free. http://www.firstonetv.eu

Don’t know if this a good combo. Last year at least Michelle was somewhat respectful and serious about the performances. With these two, this year sounds like it’s just gonna be a 3-hour reaction video. I’d be perfectly happy if Logo just broadcast the show with no commentary at all.

Eurovision is not meant to be taken seriously! In the UK, we have a sassy, catty, gay chat show host does our coverage. He gets increasingly drunk and throws shade like it’s Kalorie and those dollar bills on her dress.

IMO they should get commentators who know about Eurovision and European geography in general. So cringey listening to them last year. Felt like I was watching Kids React on YouTube.

music is not drag queens

Apple
Reply to  music is not drag queens

Pretty much. We can watch videos from 2015 and earlier though.

Hey- So I live in the US. Just a clarification question. Is there any way to watch the two semis from here too? Or is LOGO just doing the final event? Advice anyone?

As far as I know they’re only promoting the finals.

If you have TVE or Deutsche Welle on your local cable, see if their schedule has the semis programmed. I know they at least air the final live.

Last year I watched through a stream from the Swedish broadcaster. Plenty of other stations do the same thing and you can watch them for free, but finding them can be hard if you only know English or aren’t in any American Eurovision fangroups

Per the eurovision website https://eurovision.tv/shows
It is confirmed that neither the semifinal nor the final will be broadcast in the US (or Canada or Brazil or Korea)

I don’t know about Canada or Korea, but the channels that broadcast (only the final) in Brazil and USA don’t reach that many homes across these countries. EBU is not just neglecting a lot of fans, but also losing some potential markets that reunite more than 600 million people. I can’t even show last years’ winners to my friends and try to get them interested on the contest, since the videos are blocked until today.

I just hope this new host knows at least the basics of Eurovision – like why the Big 5 are the Big 5.

Last year they didn’t know even that, forget any historical references or context.

Could anyone refer me to a link of last year’s Eurovision on Logo? I’d like to watch it with their comments… 🙂 thanks

Uh, I’ve tried to find it through their site, but I couldn’t

….Wait- isn’t logo also airing the semifinals this year as well? Or is that just a rumor I heard?

All we can do is pray.

And lipsync for our lives.

When this channel started broadcasting Eurovision for the US, for some reason Eurovision has started geoblocking the Youtube live shows and also the performance’s videos for Brazil, where the contest isn’t broadcasted. I would say the same probably happens to other countries. So, this is terrible news for me, since I’ll have to look for alternative (and slower) ways to watch Eurovision. Thanks a lot, Viacom.

As I mentioned in another thread below, it turns out that the geoblocking in Brazil, Canada, the US and Korea would still happen anyway even without Logo TV broadcasting it stateside. The EBU mentioned that rights with the songs (and not the broadcast itself which is a entirely different matter) made it difficult to make their streams available to those markets.

James, I tried to answer, but my comment was held hostage by the hungry moderation queue. I’ve read your link, but I don’t buy EBU’s explanations. They never said what’s exactly the problem, but it happened at the same time Viacom bought the rights to Logo. Last year, they promised that they were working to solve it, but I guess they just gave up and let fans in Brazil, Canada and Korea without even an explanation.

The Viacom deal would have only affected the United States as it’s the only place the show would be broadcast (apart from international channels that has long carried global rights to the contest like TVE). I understand the coincidence of the timing, but that doesn’t explain the YouTube streams’ unavailability in Brazil, Canada and Korea. Youtube being YouTube, it has a significant amount of content that cannot be seen by a certain amount of countries due copyright claims from music companies, and most often the case has been to either have ads placed or block them from several countries. Music… Read more »

Anyway, James, can’t we agree that they aren’t giving a solid explanation then? More than that: can’t we agree that they’re failing to come up with a solution? Maybe I’m wrong about blaming Viacom, but they’re giving me reasons to suspect about that. If Youtube is the problem, they could try to broadcast it also on their website as they did in the past. Most people would still watch it on Youtube (for obvious reasons), but they could give these other countries an alternative. The Viacom deal affected TVE’s broadcasting here in 2016. Since TVE had the same signal to… Read more »

Have you tried Deutsche Welle? It’s a German international channel that also airs the final but with German commentary. I had it as a basic cable channel here in the Philippines so I got to watch the first hour live at 3am before later moving to Youtube. 🙂

Sadly, Deutsch Welle hasn’t broadcasted Eurovision to Brazil on the last few years. RAI did it for a while, but stopped doing that. I’ve heard that RTP does that, but my cable company doesn’t offer it. So my only option is TVE and there’s always some suspense to know if they’ll broadcast it. The worst thing is that none of those channels are HD. I would gladly pay for a PPV in high definition for the semis and the final. It’s so bad to depend on streaming connections. Last year, I got a VPN and tried to watch it on… Read more »

Meh, there are better and more talented people who could comment on this. If we’re going by musical talent, they should’ve called Ivy Winters, Alaska or Sharon Needles.

Viacom f—ed this up royally last year, buying up the North American rights, then failing to secure a Canadian broadcaster. Result? No access to to an English language broadcast in Canada in 2017. Nice work guys. Sort it out for 2018, eh? (Sorry, couldn’t resist).

That’s much of the point. Ghetto-ize it and deliberately get it geoblocked on YouTube, so it isn’t competition for the other half-dozen Viacom music channels.

I’m so pissed that we can’t watch the YouTube streams anymore. SO INSANELY IRRITATING.

What Logo should do is NOT geo-block in the US. Let people watch with no commentary on eurovision.tv, if they want. But if they want commentary from a silly, hysterical duo – Logo’s supposed “value add” – then they can watch on Logo’s channel. That would then motivate Logo to provide an appealing commentary team to draw eyeballs. And everybody’s happy.

As it is, the current arrangement is killing Eurovision’s budding profile in the US by taking it out of reach for most folks.

Logo doesn’t even upload it to Youtube. If you are in the US and want to watch live Eurovision songs you have to really work hard.

Logo should just stop with the broadcast altogether, it’s the 90s! people can watch wherever they want these days/

It’s not entirely Logo’s fault. Apparently, even if there wasn’t a US telecast of the contest, all streams and performances from 2016 onwards would still be geoblocked.

Thanks! Did not know.
I wonder though if Logo has the rights, why wouldn’t they just have it available on YouTube…

The 2017 final was available on their Youtube channel for a while but upon checking it today, it seems like it switched to private (although I can’t be entirely sure as I’m not from the US).

This is why I pay for a VPN–because I’d like to watch my semi-finals and to watch the live performances back to continue to enjoy the stage shows all year. Logo’s geoblacking is very un-Eurovision in it’s deliberate exclusion of content from fans. It was much better for American Eurovision fans when we could watch from the actual Eurovision.tv site. Thankfully, SVT and YLE have saved us with their global feeds! (not to mention, these commenters don’t know squat about Eurovision.)

Which VPN is the best? I used a free one last year but it malfunctioned/lost connection and I missed a few of the songs. I was so upset.

oh no not him again. I wish they would change it up each year. Looks like I will just stream it from eurovision.tv