Alice had to chase a white rabbit to find her wonderland. We at wiwibloggs simply followed Finland’s Saara Aalto and arrived at a Eurovision Wonderland.

On Wednesday, the Finnish superstar and X Factor UK runner-up brought the Eurovision party to West London. For one night only, she held court at the famous Under the Bridge venue. Fellow Eurovision 2018 singers Ryan O’Shaughnessy and Ari Ólaffson joined her, as did Matt Terry. He beat Saara to the X Factor 2016 crown, but there’s clearly no bad blood between the former rivals.

But proceedings were kicked off by 96 One Dream — that’s Holly Murray and Vanessa Rogers. The pair performed their original track “Glass of Cola”. The Bromley-based best friends and Youtube vloggers channeled some camp-pop realness, matching casual outfits with colourful faux fur coats.

@96onedreamofficial opened for @saaraaalto in London. Would you like to see them at #eurovision2019? #allaboard

As Saara and her pair of hunky dancers were getting ready to hit the stage, spectators could enjoy the disco sounds of Kylie Minogue and Steps along with a few Eurovision classics.

But the diva was soon on stage, welcoming us to her Eurovision Wonderland with “Queens” — the song which placed third at Uuden Musiikin Kilpailu 2018.

The eccentric pop singer then treated the crowd to a number of tracks from her new album. But don’t fret about missing out – her sixth album and first international LP, appropriately called Wild Wild Wonderland is out today.

It includes tracks ” Wildfire”, “Don’t Deny Our Love” and “Hän”. And UMK lovers won’t be disappointed – the 13 track release features all three UMK 2018 songs while her 2016 effort “No Fear” is a bonus track.

One of the album standouts is the Xenomania produced “My Touch”. They’re the production house best known for creating some of the biggest hits for British girl groups Sugababes, Girls Aloud and The Saturdays.

Another hot track is “DANCE!!!”. It’s from The Family songwriting team, who also wrote her Eurovision 2018 entry.

But the night was billed as a Eurovision Wonderland. And sure enough, we got plenty of song contest gold.

Saara performed a set of classic, going from Loreen’s “Euphoria” to Conchita’s “Rise like a Phoenix”. And our absolute favourite – Sertab Erener’s “Every Way that I Can”. Yes you can, honey!

Then it was time for the duets.

First up was Ireland’s Ryan O’Shaugnessy — who recently presented his team for Lisbon. And while she struggled to pronounce Ryan’s Irish surname, the duo nailed their cover of “Rock’n’Roll Kids” — the Eurovision 1994 winner.

Matt Terry was up next. And we saw Saara rock some summer street fashion while singing “Calm After Storm”, the Common Linnets’ runner-up from Copenhagen 2014.

Closing the round of duets was Ari Olafsson. The Icelandic heartbreaker and Saara brought some operatic class to the evening in the form of Andrea Bocelli’s “Con te partirò”. The song might lack a direct Eurovision connection, but the Eurofans in the venue were more than impressed.

Saara closed the show with her song for Lisbon “Monsters” – which she recently covered in 34 languages. Vocals – check! Slick choreography – check! Show-stopping performance – check. We approve!

Team wiwibloggs was on the ground and backstage, delivering you exclusive access to the night’s highlights. You can see more of our coverage on Instagram by clicking here.

Saara’s Wild Wild Wonderland is out now. Listen to it on Spotify below. It is also available on all other major streaming and download services.

What do you think of Saara’s London gig? Did it live up to your expectations? Let us know in the comments below. 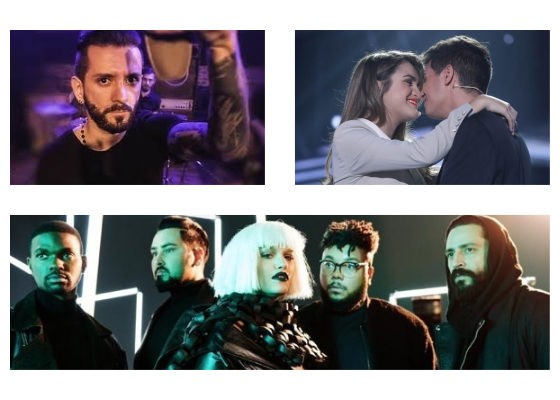 diva she ain’t but would make a nice drag

Monsters is one of my favourite songs of this tournament. I hope it wins. I love the lyrics and the uplifting hopeful message it sends. Everyone has their ‘Monsters’ in their life – demons of depression, anxiety, past hurts, struggles. This song is an anthem, a declaration of hope and intent to move forward not bound by thoughts and chains the enemy strives to bind us with. That we can live free, with hope, not carrying the lies our minds create. Aalto sings “Now I’m gonna let in all the light tear down the walls” The truth, the light shall… Read more »

Monsters is one of my favourites so I hope it qualifies. Good luck, Saara!

Her and Ryan singing was perfection. I have loved that song for a while now and when I heard them singing I was mindblown! Thank you Saara and Ryan!

Saara and WWW are perfection!??

It was a good move from Saara to release a new album just before ESC, this gives her more attention and fans, which she really needs to qualify from that semi-final! I am now more positive that she will make it to the final, but she needs all of your votes <3!

I’m really genuinely happy for Saara. I hope it does well. Also if Xenomania produced track, I have high hopes for it and the other songs.

Let’s start a new trend of positive comments about Saara Aalto! 🙂
I’m happy for her, and I hope she does well in Lisbon.

And can anyone tell me how can I change my profile picture?

I listened to first few tracks on the album and they are really great, well produced and fun! I downloaded it on Deezer. 🙂

Oh , look is another article about Saara aalto

You clicked into this article just to write that? How sad.

sad is that are countries who dont have a single article and this woman have like 50.. how is this fair?

I’m pretty sure it’s not Saara’s fault if the other artists don’t do anything worth writing about ? You just dislike Saara so you won’t admit I’m right, but publishing an album is huuuge.

You should have your ears tested by a doctor and consider having a hearing aid device.

Greatest of all time? Messi is the goat have i heard.
What does GOAT mean?

album reminds me of emmelie’s album and carly rae jepsen