Smooth and cool as ever — Mikolas Josef is literally flipping out for Eurovision success. He’s joined on stage by two backing dancers who at times act as prop-masters, in between breakdancing for practically three minutes straight. Mikolas spends much of the performance in the centre of the stage, on a white platform with stairs on all sides. He’s lit up in the spotlight and certainly the star here. His breakdancers come in and out of the shot at their marks, with blue and magenta lights the colours serving them.

He ditches his traditional backpack look at the start of the song, instead putting it on after the first chorus. At one stage there’s plenty of acrobatics as his dancers take the backpack off, only to throw it back on Mikolas. It’s a flashy bit of quick change, but there’s not exactly much of a reveal here. The entire performance doesn’t quite come across as smooth as it could though — and there were plenty of technical issues that caused delays throughout his rehearsal time. With plenty of camera cuts and split-screen action, there’s obviously a lot going on behind the scene. At the end of the performance, Mikolas rushes from the catwalk back to his platform to land a front flip. He loses his glasses in the process, but he clearly has not lost sight of the goal.

Mikolas Josef — “Lie to Me”: Reviews and Reactions

Read all of our Czech Republic Eurovision news here 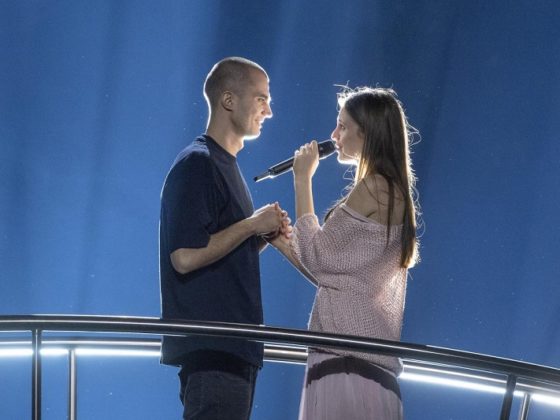 Lithuania: Ieva Zasimauskaite and her husband rub noses on a bridge during first rehearsal

I really liked the staging! Seems more or less like the music video. Sad he had this accident during the rehearsal. Hope everything is fine and he recovers soon.

EBU ruined everything with this stage!!! What a bastards!!!

How was this a favourite to qualify? It was very much a toilet break material for mee… Sorry.

I kinda like the song and the singer, it’s fun and catchy but the lyrics are a bit risqué, sassy so I am disappointed that he has 2 male dancers with him on stage, the 3 of them together singing that song makes me feel all of a sudden uneasy and untill now it was just harmless fun. It would have been better with a boy and a girl, in my opinion. Anyway, good luck!

I think ambition is the keyword here, like William emphasized. Mikolas told that he wanted to use the video as an inspiration and I believe it was the right move. Loved the colors. It seems that they still have a lot of work to do, but that’s also because they are trying to do many things. I appreciate the make it or break it attitude. Oh, and I’m starting to think that his backpack will be this year’s equivalent to Romania’s cannon on the last contest. People will wait for something to come from it and…

Yeah, they obviously want to go all the way this year. I love their enthusiasm!

Apparently he was rushed to hospital – could it be from the flip? Anyway I hope he’ll be fine.

Mikolas Josef does flips, tricks and injures his back!

Still not my cup of tea…

If I try to be objective, the performance is entertaining, complex and memorable. I would sack the backpack, it’s very distracting and useless. He looks like a schoolkid.
I like the dancers, the theme, the colours and the performance overall.

I really don’t get how this is so highly ranked…it’s so overrated. Yeah it’s probably Czech Republic’s best effort in ESC so far, but I don’t get the hype around it. We have seen all this before and in fact, it failed badly when tried before too. The fact that this is in the Top 5 to qualify is absurd. Borderline atleast.

I like this, sort out the details and it could work well. The dancers are great, I love the squares and the similarity to the video, it looks nice and he’s got the charisma. This one will surely get people’s attention. Just sort out the bacpack thing (get rid of it completely or during the performance) and qualification should ne no big deal.

What the hell you’re talking about?
At least Mikolas has charisma!
Sth that Liam and one direction lacks

One of those songs that I liked from the start, but I feel a bit thierd of it right now. But that might change. ESC need this type of songs that give you a happy feeling. It’s that type of song that I don’t really listen to the lyric. Just make me want to dance and make me happy. Like Moldova and Romania last year. Esc need easy, happy songes. Not only serious song that break your heart.
Good luck from sweden.

Daniel, I think we need deep sand songs aswell, balcanballads but also pop like the swedish songs from Sweden, Finland and Poland. (Don’t know how many songs that is swedish this year, but that’s not importent, as long we have a lot of diffrent songs in ESC. ) As I’m from sweden I appriciate songs that I usaly don’t listen to. I like the song from greece, georgia, marcedonia. They are not in my top five but whithout that type of songs ESC woud not be the way I want it to be. Perhaps some like songs from sweden aswell.… Read more »

He Will qualify for sure. But not sure if it will be the high score it was predicted to be. Still time for improvement though

Well, ok
I don’t like this song too much, but I thought he could do some fireworks and qualify
This is CheapStaging101

Talk Dirty to me….

GAME OVER GUYS. According to Suzanne and Robyn, Netta was a disappointment.

The new backing vocals are terrible. Why did he change it?

I’m already tired of that backpack. Stop it, please!

what’s wrong with the backpack? he cant do anything else xD

Quite childish and cringy. I am disappointed.

From this snippet, it needs a bit more of energy. Maybe they are just trying stuff.
But in any case, I don’t this getting left behind. That dance was cool too.

Go k ill yourself b**ch! You just have to make your du*b comment on every post. D..I..E

Sweden has the best high tech stage. In comparison, first Ukirane and now this…
PS: And those footages William took, is the venue at some old slum? It looked desserted with literally nothing but a dirty river behind.

Where is the video reaction? you’re taking too long guys

Im more and more convinced that ESTONIA will win

She won’t but the led screen that is called a dress might take her to finals.

I wish good luck for Czech Republic, the most unlucky country in esc history.
off topic : FYR Macedonia will be top 10 like Malta 2013.

So far disappointed with all performances

They are REHEARSALS. please get that into your head.

I hope this will be our best result! 🙂

Disappointed… Expected more from the most upbeat entry of this semi.