Czech Republic’s team has announced that Mikolas Josef has been sent to hospital as a precautionary measure after his rehearsals.

Mikolas’ rehearsal performance of “Lie To Me” involved a high level of acrobatics, bringing his signature sass and wood bamboo to the big stage in Lisbon. He impressed with a diverse performace, and there were no telltale signs during the performance that he was injured. He did, however, stop his first rehearsal due to what he perceived as a potential health and safety issue on the stage.

Mikolas remains in good spirits despite his injury, but will remain in hospital today and has cancelled all further press for today.

I can confirm that I got injured during the rehearsal and the situation got worse after several hours. I cant even walk now. Got back from the first hospital and I am now heading to another one. Thanks for all your messages and prayers we are all doing our best to get me up on my feet soon. ???? I will perform no matter what.

Several hours later — around 20:00 CET — Mikolas shared an Instagram post of him on a stretcher in hospital.

The Czech star is seen on his back with his legs raised, with doctors and nurses monitoring his condition.

“I can confirm that I got injured during the rehearsal and the situation got worse after several hours.”

“I can’t even walk now. Got back from the first hospital and I am now heading to another one. Thanks for all your messages and prayers — we are all doing our best to get me up on my feet soon.”

“I will perform no matter what.”

We send our love to Mikolas and wish him a speedy recovery. 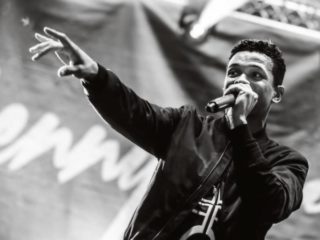 Czech Republic: Benny Cristo announces revamp of “Kemama” to be recorded in Kenya Has there anything like this that has happened in the past? Ie accidents while rehearsing that led to something serious? How was it tackled?

Guys, if you haven’t heard of it yet the choreographer is working on various new plans for the performance they could use even if Mikolas couldn’t move much or at all… let’s hope for the best and good luck to Mikolas and his team. 🙂

That performance was really good! Hope he gets well soon!

Good recovery to him hoping he will be back very soon.
For cons think to take a picture for his instagram when he’s in the hospital is just ridiculous and superficial. If he was on the Titanic he would make a selfie?

Get well soon Mikolas! Though I suspect that he will has sustained quite a bad injury….

Has gotten worse you mean…. And yeah.. Its sad.

Who let him do that, and without safety measures in place? Isn’t that what HoDs are for?

I really hope it’s nothing that serious and he can perform at Eurovision, even if it’s in a wheelchair while he recovers.

oh no he’ll have to steal julia’s wheelchair

Get well very soon and fast recovery. We need you in the final.

Why do something you cant do?

Oh, man! After you gave your best during all these months and got perfectly ready with a potential winner song, then $%it happens

Wishing you a speedy recovery and please be ready for the semifinal 1, from Spain

He will be well and he will take the trophy!

I hope Czech Republic will qualify. My absolute favorite is Albania.

I hope he gets better.

Mikolas has now said that he cannot even walk anymore… I wonder what will happen. Will they withdraw or will he be able to recover in time?

Maybe they will rearrange the performance so he can perform, more than likely. However, it depends if the hospital he’s going to will allow him if he needs a major back surgery

I did also hear a rumor that they could move Czech to the second semi.

According to the article in Czech translated into English : “the singer induced a nasty wound with the cervical spine during the first rehearsal”. Hopefully he is a fighter and will get back on stage stronger and ready on the 8th of May (semi final).

Mikolas for Blesk.cz : The first thing that came to my mind was that Eurovision ended for me and I was terribly disappointed by the fans who sent me here. I will fight with all my strength, even if I only stand on the stage. I will do everything to keep going. Please keep your thumbs up

Great time to get rid of the backpack.

Hope nothing serious, get well soon. <3

Was about to give a plus before I read the end

it was a joke jeez stop downvoting me

edit it out then

I gave you an upvote! I think you’re spot on

Um, no. WHEN will wiwi start moderating the comment section? it gets so annoying, especially this kris aka troll dude. sigh

No, it’s not. Better check poland 2015 and the dutch chicks who exploited their mothers dead last year, didnt work out for them . But Trolls gonna troll.

One czech tabloid news web has the photos of him being taken to hospital – they say it’s a neck injury, but the delegation states that it’s nothing serious and it was just precautions measure. I really hope he’ll be fine and also that they’ll give us a bit more information.

I would expect the delegation to downplay it for as long as possible – or at least until the details are known and must be confronted somehow.

Hopefully, it is not serious and he will be able to go on with different staging. Hard to do at this point but he still has time and if his dancers are good enough, they might be able to pull off a performance where he just has to do a series of cocky poses as in the video and the dancers do the heavy work around him.

Yeah, I figured they would downplay it – I just wasn’t sure how much. I guess we’ll just have to wait and see.

Oh no no no! Omg, please get well!

too much twerking. Get well soon

He currently has a neck brace so it’s safe to say that it’s not the twerking’s fault.

You do know that the spine goes all the way up to the neck. lol

Hope he gets well soon and that things don’t get any worse. Maybe he should tone it down a couple of notches later on.

I guess we have the answer to why his performance lacked energy. If he had problems with his back and still performed the way he did, then hats off, good job. Get well soon.

Well, it tells us he cant handle the back flip

We will have another contestant in a wheelchair

no, he want brake!

Duh. I wasn’t serious about it.

That sounds not good. Hope he is ok by second rehearsal..I’m sure he will be fine though.
Hope he is ok