She made all of Europe dance with her song “Toy”, squawking like a chicken to the Mizrahi beat. And it seems that Eurovision winner Netta Barzilai can count Israeli Prime Minister Benjamin Netanyahu among her many admirers.

From the moment Netta won Eurovision on Saturday evening, the country’s esteemed leader has been singing her praises, saying that she gave Israel even more to celebrate. Her victory coincided with Jerusalem Day, which commemorates the reunification of Jerusalem and Israeli control of the Old City following the Six Day War.

On Sunday morning, the 68-year-old politician paused while en route to a Cabinet meeting to perform Netta’s chicken dance.

Wearing his signature dark blue suit with light blue tie, the former combat soldier pushed his elbows back and attempted to flap like a chicken.

He later uploaded the video footage to his official Twitter page.

On Wednesday the Prime Minister and his wife Sara welcomed Netta and her parents to their official residence.

According to the Times of Israel, he greeted the singer with “Kapara alayich,” which is the same colloquial phrase she used to greet her fans after each performance. It means “sweetie”.

A video of their meeting shows the Prime Minister once again performing the chicken dance, this time with Netta’s dad.

Netta did not show up empty handed. The 25-year-old gifted her hosts with lollipops shaped like chickens.

Netanyahu has been very direct about his desire to host Eurovision 2019 in Jerusalem, a decision that

Speaking to his cabinet on Sunday, he said:

“These days, Jerusalem is blessed with many gifts. We received another one yesterday evening, with Netta’s suspenseful and shining victory. The gift was that Eurovision will be coming to Jerusalem next year, and we are proud to be hosting it.”

The Times of Israel reports that later in the day, during a meeting at the Foreign Ministry, he re-iterated his position.

“Those who didn’t want Jerusalem in the Eurovision now get Eurovision in Jerusalem,” he said.

Are you loving Netanyahu’s support of Netta? How is your chicken dance? Let us know in the comments box below. 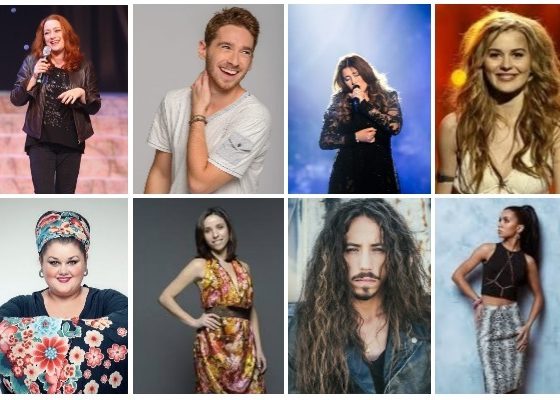 How did they vote? Former Eurovision stars rank 2018 acts as part of national juries For all the Antisemites, uneducated, jealous or simply morons – who say filthy untrue and biased things about Israel or Netanyahu – Who cares about you anyway??? LOL.. Eat your heart! Eurovisin will be happeninig next year in Jerusalem – the Capital of Israel! LOL

no, it didn’t have to be said actually. your comment is just shallow and mean. there are plenty good singers in all shapes and sizes. you can live a healthy life and still be overwheight. luckily for netta, she’s acccespting herself the way she is and don’t care about shallow people like you. and you just didn’t get the song, that’s fine, but your loss

Oh because you are such a great doctor to determine all fat people are sick and are destined to die. Pfftt not impressed by you. If they lead a healthy lifestyle, people can be perefectly healthy and still overweight. You clearly basing your comments around nothing. I advice you to deal with your own insecurities and leave others alone

Your comments are not a good massage to send to kids, and what you’re saying isn’t even true

being healthy and active is one thing, but as i said, it’s possible to be healthy and overweight, depends on the body type. judging people you don’t know because they are overweight is shallow and that’s that.

Oh look, the winner of eurovision is dancing with a war criminal. Yay.

clearly you don’t know the reality of israel at all

Lovely article, just wanted to let you know that that isn’t Netta’s dad, that’s Yoav Tzafir. Among his many roles, he’s also the director of the Israeli eurovision selection. And also, “kapara alayich” doesn’t really mean “sweetie”, it’s some sort of a slang-related display of affection.
A big fan of wiwibloggs and keep up the good work

Netanyahu is hardly “esteemed”, William. If people are expected not to be upset at Israel winning because of political issues, Israelis, particularly the prime minister, would be advised not to politicise it themselves.

I don’t think Israel will be that dumb to do that.

Netta also took part in the recent episode of ‘Eretz Nehederet’ (which is something like the Israeli Saturday Night Live) as part of a big segment dedicated to her victory Which featured the characters of all previous Israeli Winners as well as Eleni Foureira, Rasmussen and Mikolas Josef.
In this video you see some behind the scenes of the ESC segment, including the hilarious encounter between Netta and her comedic counterpart:
https://youtu.be/LqYzIh5ftUA?t=2m28s

She does have great comic timing

Benjamin Netanyahu should be in prison for his war crimes and his corruption but hey how cute he does the chicken dance with Netta! .

As an hardcore leftist Israeli I think he should definitely go to prison for his corruption (I’m sure he will eventually), and that he is a despicable human being with a disastrous political agenda. However he committed no war crime, far from it. Comparing casualties on both sides in order to figure out who’s right is superficial and just ludicrous.

Of course I Know of it Darling Lilia, and I was obviously stating my own opinions (see how I put “I think” at the beginning?) which is also a basic right in a democracy like ours.

Wait, hang on here a second.

The organization that has the destruction of the other state written into their freaking constitution turned out to be the bad guy?

I gotta sit down to process this.

I’m gonna bet Netta and Bibi probably aren’t all that eye to eye politically, so its nice to see there’s SOME countries that haven’t completely politicized a chance to get congratulated by your head of state for accomplishing something.

I will tell you more than that. Bibi really tried to prevent the establishment of the IPBA because he felt they are not enough under his control, now he invites the IPBA heads for dinner because they won Eurovision.

As it should be. You win something big,, you get to meet the big guy.

Reuven Rivlin is the head of state of Israel.

Ugh the israelis are already here. Downvoting anyone that doesnt kiss their countrys ass. Next.

He always looks so serious. Glad to see there is a fun/human side to him.

OK, you win this one, Bebe. That was chill. Everything else, screw that, but thanks for this.

Netta and Netanyahu are great people!

Netanyahu has been accused multiple times of several misconducts and inappropriate behaviour by multiple women, he had to go to court and you think he’s wonderful? That’s some low standards. Guess the orange mess and him must be great pals. If this song or the “singer” had anything to do with #metoo or standing up for women, she wouldn’t be chicken, yes pun intended, and party with him. What a joke! A war criminal who can’t keep his hands to himself. The Icelanders have my full support in their protest! Great respect for Iceland!

lol, that’s one of the funniest lies i’ve ever read on the internet.. Bebe is terrible but he was never even remotely “charged” with inappropriate behaviour with women.. feel like providing a link for your claims? LAUGHABLE .. lol.. greetings from london

Your respect is probably the only thing Iceland will have because of the boycott.

We love you Netta!!! Can’t wait for Jerusalem next year!!!!!

I never saw an Eurovision so much famous after the Grand Final ended. I feel next year will be the best Eurovision ever. I don’t know what they say in the news in Israel, but I want Dana International to host

Is she from Israel?
And what Israeli news say about the place? I hope it is Teddy Stadium, because the sports arena is so small for a big show like Eurovision

GAL GADOT WOULD BE AMAZING. Wonder Woman surprised me in so many ways. Loved it. Love her.

Unfortunately, 2019 will be a crowded year for Gal so she probably won’t be able to make it. I believe she would have agreed otherwise though, she is such a sweetheart.

But will they be funny in English?

see asi instegram posts they will be funny trust me

Rotem Sela (a model) and Asi Azar (an annoying tv host) wouldn’t be able to do anything but talk. They can’t sing or dance like Mans and Petra. I think a host should be some kind of actor/comedian or a singer.

Wonder Woman even gets a mention in Toy, so it would be perfect!

LOL This president is AMAZING. I can’t stop watching his chicken dance :))))

Can Israel please give Netanyahu to France?

Say what you will about Israeli politics, but I love their attitude on this. It’s just like “Y’all thought Netta winning was political? We’ll *show* you political!” It’s just hilarious

This is gold LOL