And it’s pretty clear that Norwegians share the sentiment when it comes to Tom Hugo, as his song “Family” has been selected as the official song for Pride in Norway.

“The official #pride song of Norway is released today!” he wrote on Instagram on Friday.

“All income from sales goes to an international charity fund managed by FRI, so follow the link in bio to buy if you’d like to support their work.”

FRI is a national organisation for LGBT people in Norway, which “works for the equality of lesbian, gay, bisexual and transgender people and their liberation from all forms of discrimination.”

Tom co-wrote the song with Alexander Nyborg Olsson and Cavego, and the trio subsequently won a nationwide competition to become the official anthem.

A funky song with disco edge, it celebrates the strength and camaraderie people find in each other — a reality that has helped so many within the LGBT community overcome their collective struggles.

“Rise from the ashes of broken hearts/ Together we won’t fall apart,” he sings. “I see red fire inside ‘a you/ You got blue issues and golden heart too.”

As with his MGP song “I Like I Like I Like”, Tom takes a vintage sound but pulls it into 2018 with slick production and a big heart.

The official #pride song of Norway is released today! All income from sales goes to an international charity fund managed by FRI, so follow link in bio to buy if you’d like to support their work for HBTQI-rights worldwide. @oslopride @pride_site #family #gay #artist

Speaking to Norway’s Blikk, the Kristiansand-stunner said that the theme of family was inspiring.

“Whether it’s by birth or chosen, it’s an important part of life,” he said. “They support us when the everyday feels like a struggle, lifting us up when we are down and attending the party when we celebrate.”

“And since I’m always very happy when I hear disco, disco-pop became the musical direction when I wanted to make a tribute. I’m looking forward to getting on the Pride scene and celebrating this summer.”

Will you be celebrating with Tom this summer? Are you looking forward to hearing more music? And should he return to MGP asap? Let us know down below!

Years and years go passing by
The only constant: You and I
I feel much stronger next to you
Nothing in the world that we can’t do

Get it up, get it up, all in
Hands in the air tonight
Say my name, say my name out loud
So proud to call you mine
Take a chance on all you wanna do now
I’ll stand by you, dance with you 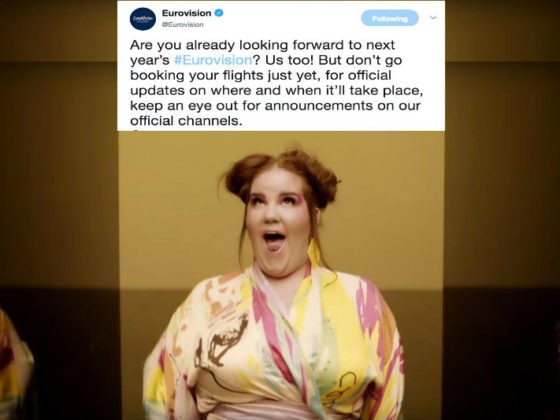 Thats one nice pride song:-) and the artist also seems like a very likeable guy (and handsome) 😉