The EBU has sent a formal letter to the Israeli prime minister, Benjamin Netanyahu, requesting that politicians avoid interfering with the production of the Eurovision Song Contest 2019 in Israel next May. The EBU has also asked that Israeli authorities not prevent or otherwise restrict visitors from entering  Israel due to their political views, beliefs and sexual orientation. They’ve made it clear that rehearsals must take place on Saturday, which is the holy day for the religious community in Israel.

As we reported last week, EBU Executive and Supervisor Jon Ola Sand laid down the law during an interview with KAN last Thursday. He said that Shabbat cannot interfere with the host city’s hosting duties. Hosting Eurovision without working on Saturday is impossible.

The news about the letter, which was published in YNET, has caused a massive debate on Israeli social media. Whilst some commentators claim the letter is only a formality and point out that Ukraine received a similar letter before hosting Eurovision in Kyiv last year, others think that it suggests that Jerusalem is the preferred host city due to its larger venue and that this is why the letter expressly addressed the Shabbat issue. This is despite Sand’s recent statements that were interpreted by the Israeli media as favouring Tel Aviv as host city.

In the meantime, Miri Regev, who has tirelessly argued on behalf of Jerusalem, said today that although she still thinks that Jerusalem should become host city, Tel Aviv may win this right eventually. She added that in any case she is confident that Israel will host Eurovision successfully. Her comments were made during the annual Israeli senior executive committee.

The decision regarding the host city will be made within the next few days and bring an end to the seemingly endless speculation.

Israel’s Sports & Culture Minister famously turned up at the Cannes Film Festival in this Jerusalem dress. We wonder: Will she wear one with Tel Aviv imagery if #Eurovision heads there in May? United Kingdom: SuRie releases music video for ‘Taking It Over’ ahead of Pizza Express Live shows It’s like telling a dog to not eat the sausage you just threw in front of him. In any case, it promises to remain interesting in the very least. Personally, I think it is debatable whether to allow any country who isn’t truly secular to host in the first place. Everybody should be allowed to everything and any given day of the week. Anything else is just ridiculous.

EBU did not promote esc as gay event its the gays who took over the promotion in Western Europe. In Eastern and and northern Europe eurovision. Still is a family show. You cant blame EBU for many gays attending the shows. You can’t blame them either for promoting equality for everybody. Everyone should support that IMHO.

Don’t think the letter hints towards Jerusalem as host, but is sent because if the minority orthodox party who claimed no work on shabbat. If rehearsals take place on Saturday and no public transport is nor restaurants around the venue are open, how will the rehearsals take place? Its still impossible. I think the main reason is to lower the barriere for Iceland and other hesitant countries to enter. Besides Israeli broadcast did invite many neighbouring Arab countries to join in, or was that just formality because they knew that Lebanon and Jordania will never come? EBU should do anything… Read more »

The sabbath is on Saturday, not Sunday.
Sunday is actually a holy day only to christians as the bible stated that Christ resurrected the first day of the week, Sunday.
Saturday is the holy day to judaism, as it was the day God rested after the creation and is one of the 10 commandments: “remember the sabbath day, to keep it holy”

I’m thinking they will let Jerusalem have it so they are just putting these additional rules as insurance or a since of trade so that the PM gets his way with the location but not with the rules.

The dress is so cringe…

This woman is one big cringe, I think it’s her second name- Cringe.

Fake news.
Those requirement are sent to all the hosting countries, and except the Shabbat part (that only applies for cities with specific status-quo, like Jerusalem) all of those requirements are anyway statutory.

The ‘letting anyone in regardless of political opinion’ is talking about being let into the country, not in to the contest if it’s held in Jerusalem!

I think that the EBU should be fair and not impose additional rules just because it is Israel. Azerbaijan and Ukraine have not recieved similar letters, evem though they also have political conflicts, plus Israel also has hard time with security, so letting everyone in like that is not that simple. The Shabbat thing is the only thing I completely agree about, but I don’t think it will be relevant since I think the contest will be held in TLV, and KAN has aplied to EBU to pick it over Jerusalem.

Ok.. so the contest is probably heading to Jerusalem, and mark my words, this is going to be the most controversial contest ever.

Israel has hosted in the past, but things have changed. I guess EBU has the duty to avoid another “Yulia Samoylova” case. If something like that happens again, we all will accuse EBU, so they are doing the right thing. I think is “Ukraine effect”.

A lot of this letter is just boilerplate content, the EBU covering themselves after the mess in 2017.

So basically you’re publishing an article (or rather a translation of an article) about the obvious just because there aren’t real news yet.
What’s next? An article claiming that the sun will rise tomorrow morning?…

Dude just open the news, minister of the government turns against the EBU
http://www.israelnationalnews.com/News/News.aspx/251569 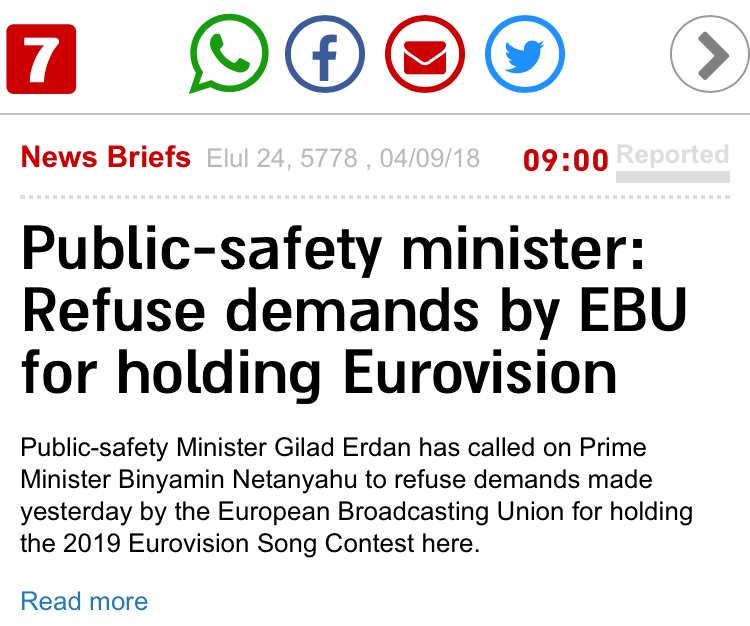 As I mentioned before – election year – headlines. Fact is – just yesterday the government (including the mentioned above minister and others) were praising the intl’ judo association for reaching a mutual agreement with the UAE regarding the hosting of their grand slam tournament with allowing the Israeli delegation to participate, and with their flag and anthem should they win (something they refused so far, leading the association to cancel the show altogether). The parliament representatives were quoted saying “sports should be above all politics” and “we are happy the UAE share our vision with this special occasion”… Which… Read more »

Also, on a friendly note – try to follow the important news sites in Israel rather than this one, you never get the full picture when you follow niche or political-agenda-induced newssites. It’s like getting all your sources from Fox News… I believe proportions should be kept in mind..

I’m sure Bebe will think of something to get back to EBU for threatening him like this.

I am just wondering if similar demands were addressed to all host cities in the past, in particular the following statement : “The EBU has also asked… not prevent or otherwise restrict visitors from entering due to their political views, beliefs and sexual orientation.” Did the EBU addressed similar demands to Russia, Azerbaijan, Ukraine, Sweden, Portugal and others? Did Putin sign such statement? As an Irish who lived in Israel for more than 10 years- this sounds like a real farce when you address such demands to a country that embraces LGBT people and have security restrictions and not political… Read more »

Well, after what happened in Ukraine and how Armenia withdrew from competing in Azerbaijan, I’m guessing this is a pretty necessary precaution.

This seems to be a new requirement after ukraine and I’m sure that the requirement to accept everyone was because Israel have a blacklist of people that cannot enter the country because they support the boycott movement, like that mayor from Ireland (I can’t recall the name).
Probably they asked the same thing of Portugal

Netanyahu is not going to put his reputation on the line for a wild pop music contest. If this were a classical music contest where everything was very formal and serious, then he might see it as worthwhile to advocate for some moderate compromises with local authorities in Jerusalem. But not for something as crazy and sensual as Eurovision is sometimes. Unless authorities in Jerusalem are really prepared for the culture shock that would be coming, I think Netanyahu should try to direct ESC to Tel Aviv if he can. If they host, he should be able to sign the… Read more »

They have really cornered Bibi. Their letter demands that Bibi publicly commits to no political interference, to allowing the competition to happen on Shabbat, and to ensure open access and free mobility to all regardless of political opinion. Making such a public commitment will be seen as caving to the demands of the Europeans and that will be perceived negatively by his political base during an election year. I actually don’t see any chance that Bibi will (or can) make such a commitment. Its unclear how the EBU will take that!

Didn’t he say before that he was committed to complying with everything the EBU demanded?

Yeah, I’ll be surprised if it isn’t Tel Aviv at this point. I’m up for whatever at this point but I’d especially like Tel Aviv.

TEL AVIV 2019! if anyone still has doubts about the venue. this should ease your mind : https://www.youtube.com/watch?v=3Wtw1MzwLKc