It’s fair to say that Russia has (for the most part) brought out the big guns for Eurovision in recent years, and subsequently reaped the rewards. But while it’s easy to focus on the country’s acts since 2010 and revel in the talents of Sergey Lazarev, Polina Gagarina, and of course the Buranovskiye Babushki, Mother Russia’s Eurovision prowess started long before that. And some of those big names have new releases.

Russia’s track record from the 2000s is impressive. Naturally, Dima Bilan took home the victory in 2008. But Russia also only hit the right-hand side of the grand-final scoreboard once throughout the entire decade. The artists that represented the country during this period were, and still are, producing some standout tracks.

Therefore, we thought it was only right to take a look at what some of Russia’s stars of the 2000s were up to now. So here’s a round-up of the latest musical offerings from Alsou, Mumiy Troll and Lena Katina.

Note: while 2004 representative Yulia Savicheva is still active and producing music, she has yet to release any new tracks in 2018 for us to include. But by all means, make sure to check out her recent back catalogue from 2017, such as “Не бойся”, and we look forward to hearing what comes out of her latest studio sessions.

Beginning right at the very start of the decade, Alsou gave Russia its first ever podium finish in 2000, placing second with her song “Solo”. She’s had an extensive musical career since then but started off 2018 by releasing “Не молчи” (“Don’t Be Silent”). A mid-tempo catchy tune, the song sees the Russian star wanting to break the silence and speak up to the one she is falling fall: “Don’t be silent, I’ll break the silence / I’ll spill myself like the ocean of despair / The dumb glance, to scream with indifference / Don’t be silent, I’m so tired to pretend”. In the accompanying music video, we see Alsou painting a picture of two lovers embracing, before she heads out into the night to find the person she has based the image off, but is unfortunately still unable to speak to them.

Her latest solo release came in June with the English-language track “Love U Back”. In it the singer talks to someone who is playing with her heart, but things don’t quite feel right and she can’t reciprocate their feelings: “The pieces don’t quite fit / Baby, we’re just friends / ‘Cause I don’t wanna go making promises / I wish I could love you like that / I wish I could love you back”. The well-produced pop track comes with a very colourful music video where Alsou rocks a series of stunning looks. It may be 18 years since her Eurovision performance but Beauty Never Lies, and this star would still give many Eurovision’s Next Top Model contestants a run for their money!

Alsou has also found time to feature on Russian rapper Basta’s latest song “Мы с тобой” (“We Are with You”). The Eurovision veteran lends her soft vocals predominantly to the chorus, singing: “I know that we are bound by one destiny / Just until you know about it / Maybe through life, the meaning becomes clear / Only until you learn about this”. Slower tempo than her previous releases this year, the song flows effortlessly between Basta’s verses and Alsou’s chorus, providing a nice mix of rap and balladry.

Moving on to 2001 when rock group Mumiy Troll represented the motherland, placing a respectable 12th with the entry “Lady Alpine Blue”. With numerous albums and a greatest hits collection under their belts in the 17 years since, 2018 saw the release of their latest LP ВОСТОК X СЕВЕРОЗАПАД (East X Northwest), featuring a mix of rock and electronic-fused songs with that distinct Russian flair.

The latest music video from the album is for “Милота” (“Milota”). Those who aren’t fans of psychedelic visuals should probably give the first part of it a miss. In it we see the band’s lead vocalist Ilya Lagutenko being transported from one of the group’s gigs to a mystical realm where he’s gifted a cat from an old bearded man, before being transported into a portal within the cat’s eye. Don’t worry, it gets weirder – the rest of the video features Ilya battling knights on castle walls, a giant killer mouse and parkour amongst other things.

Although released earlier than 2018, we couldn’t help but also draw your attention to another music video of one of the album’s tracks. The August 2017 video for “Отв. за Романтику” (“Responsible for Romance”) is set in outer space and includes (wait for it…) glitter-ball death stars, karate-fighting aliens, space-helmet-wearing dogs, Space-Invaders-style battles and alien abductions. We don’t know about you, but we’d very much be up for Mumiy Troll to return to the contest and translate one of their amazing music videos onto the Eurovision stage!

While Russia’s 2002 and 2003 groups Prime Minister and t.A.T.u. may have broken up since their Eurovision performances, Lena Katina of the latter is still rather active. After coming in third place at the contest with the song “Ne ver’, ne boisia”, the former girl group member released a solo English-language album in 2014 and Spanish-language LP in 2016. In 2018 though she has also gifted fans with a flurry of new songs, the first of which, “После нас” (“After Us”), came out in March. A simple ballad, Lena uses the song to take an emotional look back at her time in t.A.T.u with band mate Julia Volkova and thanks fans for their support throughout the years, both during and after the group’s existence. The singer adds a personal comment in the description below the music video:

Sometimes you are lucky and you can create something unique, something that can change this world for the better … like t.A.T.u. […] Music is my “thank you” for your love. And this is thankful not only from me, but also from t.A.T.u., because after t.A.T.u .. after us – you and your love have remained! […] Memories of t.A.T.u. forever remain nostalgia in my heart. AND AFTER t.A.T.u …. AFTER US. There will be music … FOREVER

Finally, Lena has also released “Макдоналдс” (“McDonald’s”). (Yes, you read that correctly.) Unfortunately not an ode to the popular American fast food chain, the song actually revolves around love, with the Russian singer talking about a person who she is forever in love with: “When we meet it’s like a mad rave / Among thousands of people there are no people like us … We are the coolest in McDonald’s / Your Nikes rub my Converses / We are the coolest in McDonald’s / And it’s not even a style”. An easy-listening pop-track, there’s nothing particularly bad about the song but neither is there anything outstanding either, and you can soon forget it’s playing in the background.

For those of you who wish that Lena was still releasing music alongside Julia as part of t.A.T.u. here’s a little treat for you. The group’s management recently made public a demo version for the song “Навсегда” (“Forever”), which was intended for the group’s 2009 studio album Waste Management but ended up not being included and was subsequently never released. So if you’ve been dying for some new t.A.T.u. music all these years, then make sure to check it out below.

What do you think of these latest tracks from Russia’s past Eurovision stars? Let us know in the comments below!

Listen to our New Music Playlist on Spotify 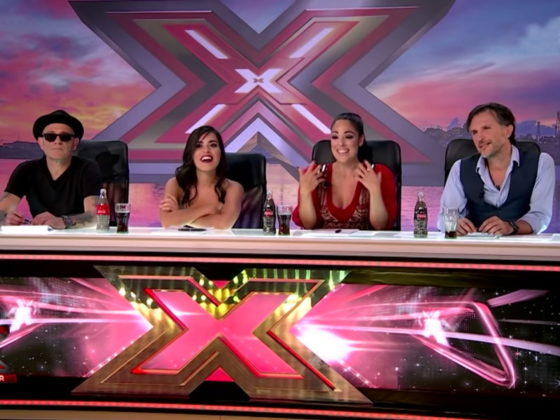 Still waiting for that Buranovskiye Babushki album. They are my favourite Russian girlband. I hope they haven’t split to pursue solo careers.

Mumiy Troll are awesome. They really brought something different to ESC back in 2001

I agree, I actually prefer them to Dima Bilan and his “imp-assi-bell” English.