La RuLo is back! Spain’s 2014 entrant Ruth Lorenzo has confirmed that she has penned a song for the Spanish selection.

She couldn’t resist it. Ruth Lorenzo was invited to the OT Gala this week, and in the Chat show — a companion show that screens after each week’s gala — she broke the news: Ruth Lorenzo has written a song for one of the contestants.

She announced it even though she wasn’t really sure if she could do it inside the academy. But who cares, she went on anyway. That’s what happens when you invite Ruth Lorenzo to OT: she either reveals news she’s not allowed to, or slays in every level like last year:

Immediately, all eyes went to Famous. Not only has he been the only contestant who has explicitly stated that he wants to go to Eurovision, Ruth also mentioned he was her favourite!

So yeah, that’s how things stand. Famous could now represent Spain with a song by Ruth Lorenzo. FANTASÍA.

Ruth brought Spain their last top-10 result at Eurovision in 2014. She co-wrote her own Eurovision entry “Dancing in the Rain”, and recently co-wrote the debut single for OT 2017 star Marina Jade. RuLo has songwriting talent.

Ruth’s announcement came just one day before the end of the submission period for Spain’s next Eurovision entry.

Earlier this week, RTVE revealed it had already received 336 songs for Eurovision 2019. That’s more than 100 up from last year!

Pop songs and over-the-top ballads are always among the best represented genres in Spain. But there is some diversity here. Heavy metal, ‘trap’ and Latin rhythms are more rare — but definitely present — in the submissions.

When it comes to this year’s author profiles, RTVE has noticed an upswell of young talents seeking their first opportunity in the music industry. Naturally they are also seeing distinguished Eurovision songwriters ready to slay it again.

And that’s precisely what Ms. Lorenzo wants: to slay again at Eurovision. How will her song be?

What do you think about Ruth coming back? Will her song be for Famous? Which contestant fits better with Ruth’s style? Who would you send to Eurovision? Tell us in the comment section below! Eurofan True Story: Bella is the Queen of the Metamoro fandom 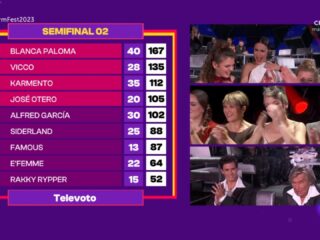 “Dancing in the Rain” is my favorite and dare say best Spanish entry this century, it was pure art and power! Ruth Lorenzo had been my dream Spanish entrant since X Factor 2008 and after 5 years of waiting it finally came true, plus the 2014 Spanish NF remains one of my infinite highlights in my years following ESC NF season, most euronerds were rooting for Brequette with “Más” which was a meh cocktail of “Uncover” & “Read All About It” after giving a bad performance it was Ruth’s advantage but the 3 jury members still sucked up to Brequette… Read more »

Spain 2014 was, and will forever be, my favorite Eurovision song of all time. It was the first song I ever heard from Eurovision that I just completely fell in love with, the power, beauty, and emotion in the song is beyond incredible. Although I love Conchita and Rising like a pheonix, Ruth was just as worthy of a winner, and I would have been happy with either one of them. How the confetti would have mixed with the fake rain though, I don’t know, but it would have been entertaining to find out!

All I’m gonna say is that she was lucky that the current voting system wasn’t used in 2014.