And now Australia Decides hopeful Courtney Act has another reality TV competition in her sights: Dancing With The Stars.

The “Fight For Love” hitmaker is one of eleven celebrities competing in the revived series on Australian network Ten.

Dancing With The Stars begins on February 18 and the Sydney Morning Herald suggests the show may run for as long as eleven weeks.

Will there be a conflict with Eurovision?

The last season of Dancing With The Stars ran for eight weeks and the final featured four competitors.

Even if the show runs for eleven weeks, that still leaves Courtney Act five days until rehearsals are likely to begin on Sunday May 4.

The casting is historic, as it makes Courtney the first drag act to compete in the series.

Have you seen my music video for Fight For Love? It’s on my YouTube now! Click the link in my bio to watch #eurovision #ausdecides ? ?? ? @femme.tv Creative Directors @thesquareddivision ? @mitchmajor

Courtney Act on Dancing With The Stars

The star has previously expressed an interest in competing in Strictly Come Dancing.

“I would want to be Courtney and dance with a male partner. And then halfway through the series I’d come out as Shane and there would finally be same-sex dancing on the show.

Whether she’ll realise that dream and compete as Shane at some point in the series remains to be seen.

Imma be twinkling round the floor on Dancing With The Stars!!! Can't wait to do all the sexy dances and wear all the pretty dresses (hopefully no wardrobe malfunctions this time) #DWTSau @DancingOn10 pic.twitter.com/f7dtvrTuei

Her reference to a wardrobe malfunction alludes to her entry to the Big Brother House in 2018. On final approach the star suffered the ultimate malfunction as her skirt fell off.

Ever the professional Act recovered and showed aspiring drag queens everywhere how tucks should be done.

But before she hits the dancefloor, Courtney will compete in Australia Decides on February 9, alongside nine other acts.

Bigger and better: Czech Republic’s Eurovision 2020 selection will be televised and we have a date 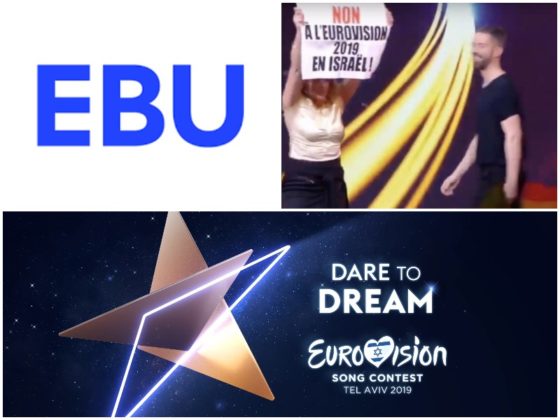 Shane Jennek is a smart guy. He’s taking the publicity and using it to his advantage. One show can help the other in a virtuous circle creating buzz around Courtney/Shane… Plus in the fame game you need to get while the getting is good and I for one would love to do DWTS. Courtney has managed to do so much since Australian Idol and become pretty much world famous and not many people can say the same.

I love Courtney to bits, but vocally it’s like between Cheryl Cole & Jennifer Lopez, so no. Great entertainers though. All 3 of them.

I hope Australia doesn’t qualif, I’m sp done the past years with those countries who afvangen every year…

I disagree, I think Australia deserves to afvangen every year.

Enough about her, who is the (other) guy in the picture?

I wish her all the best of luck but ‘Fight For Love’ would by far be Australia’s worst entry ever, it’s extremely generic and not in a good way.

I liked that song. He murdered it live though.

Why you aren’t writing about other countries contestants like this? Why is she a special case?

Well why don’t you become a wiwiblogg author and write about all those other eurovision hopefulls participating in dancing with the stars?
I see comments like yours way too often, thinking as if there’s some secret agenda on this website, but actually most of these articles are written by passionate eurovision fans who offer up their spare time to write them as a hobby.

Such a good reply!

If there’s something you think the world is missing, be the person that makes things happen, not the person who watches and does nothing.

I mean, why are they talking so much about Courtney, because she hasn’t been chosen to represent Australia, yet. Wiwibloggs gives an image to me, that she already has. I didn’t mean to be mean or anything. I’m sorry if it seemed mean.

Because unlike in most ESC countries, a good portion of Wiwibloggs’s editorial team are based in Australia so it’s easier for them to report on news in related to ESC, and its national selection as they’re from there.

News related to Courtney Love has been out in the Australian entertainment media for the past 24 hours so of course Robyn, Sebastian, and et al will report about it, just as much as they have reported about the two other artists who have recently released their songs online on the same day last week.

Is there anything she won’t do for more attention?!

I’d do it all. A Rupaul’s Drag Race Contestant that’s moving on beyond Rupaul.

Any series of Drag Race All Stars, apparently. But considering Ru blocked Courtney on social media, I don’t blame her!