A male version of Eleni Foureira, “Kinky Boots” from the UK and a lot of former national final contestants. The legendary live audition round today gave us a lot to be excited about. But in the end only 10 acts made it to the national final stage in Belarus.

This year the contest was again open to foreign artists as well as locals. This follows the 2018 selection, where Ukraine popstar ALEKSEEV was selected to represent Belarus in Lisbon.

A total of 113 acts auditioned today in front of the judges in Minsk. In the end a nine-member jury decided to choose mostly local acts. Broadcaster BTRC confirmed the ten finalists this evening.

Eurovision fans will recognize a few names. Pop duo PROvokatsiya last competed in 2017. Their song “My Love” won the televote, but the jury was less impressed and gave them nil points, ensuring a win for Naviband. With the 2019 national final decided by jury alone, will PROvokatsiya have a chance?

Also returning is the musical project NAPOLI, who have competed every year since 2014. Their best result was in 2016 when they placed second with “My Universe”. Is it finally the time for NAPOLI?

2012 national finalist (and frequent interval act) Aura is also in the competition.

Singer Michael Soul is one of the most promising acts considering. He was a contestant on the 2018 series of The Voice Ukraine, where he made it to the semi-final.

Singer Sebastian Roos is originally from Sweden. He competed at Melodifestivalen 2003 as part of the Beatles tribute band Liverpool.

A Junior Eurovision-connection can be found in singer ZENA who hosted the most recent edition of the contest, hosted in Minsk.

Vocal coach Olga Vronskaya was part of the Belarusian selection committee today. And the woman knows what she’s looking for: “Many artists can deliver a good performance and entertain the crowd. But I’m looking not only for someone who can give great concerts, but for someone who is able to compete!” She understands Eurovision, y’all!

Not everyone made it

However, some high-profile names didn’t make the cut. Flamboyant Carlos Costa from Portugal, who tried to represent his home country in the past, and the UK’s Eurovison 2006 act Daz Sampson weren’t selected. Did the judges not like the Iberian fire Carlos brought to the studio in Minsk and was Daz’s “Kinky Boots” fun but too trashy for them?

And sadly, one familiar and most anticipated act did not make it to the auditions. After dramatically withdrawing from Selectia Nationala 2019 in Romania, singer M I H A I had decided to take part in the Belarusian selection for Tel Aviv. However, today he revealed he was unable to make the audition due to illness. We wish M I H A I a speedy recovery.

fresh off the press – mihai isn't going to be there today: pic.twitter.com/ZHnXUqEdIV

What do you think? Are you happy with the acts who qualified for the final of EuroFest 2019? Who should represent Belarus in Tel Aviv? 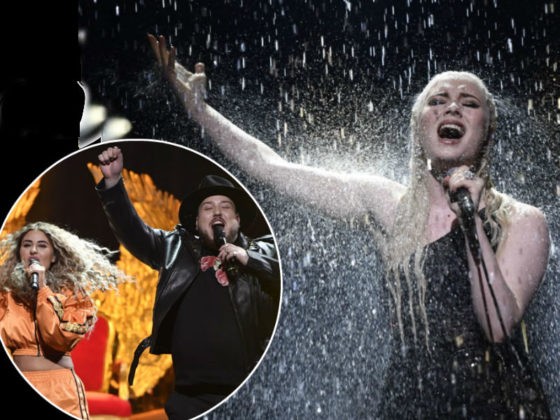 Melodifestivalen: Wiktoria’s “Not With Me” leaks for two hours on Spotify

From all these songs ‘Humanize’ is the only chance for Belarus. His vocals are awesome. He has his own manner of signing that makes him different. This song has really strong sense.
Hope that March, 7 I will tell: “Well done, Belarus. You’ve made the right choice!”

I’m really sad for Zina Kupriyanovich (ZENA) because she deserves to go to Eurovision, but ‘Like it’ is not a very good or interesting song. I hope she’ll participate in the selection in future years with better songs.

“Humanize” sounds good, but I don’t like him as a performer. He thinks he is a diva, too much vocal tricks, falsettos and that hand movement… c’mon. “Like it” is good too and her voice is very powerful. Emmanuel/Alister Merge’s voice lift his song up, “Champion” is just average, but could be a decent option.

Sebastian Roos? That is one way to cling on to a dying career.

Thank god for the flu (or whatever’s the truth story) and for Belarus having enough sense to kick out the other kinky loser. Now it really can’t be that bad.

Comment revoked. After skimming through the qualifiers, I must say this is hopeless. But at least there’s nothing disgusting, just plain bad.

Only an angel can take other angel’s flag. I’m with Michael, he’s perfect, humble and he has a beautiful voice. My only concern about him it’s that he doesn’t have that… extra charm? of all other Belarusian contestants. the couple and their flying ship, the lady with the giant discoball, the magician with the ladies floating on the walls, the naked guy with wolfs, the butterflies, the cheesecake guy and, of course, the dark prince of roses. All of them deserved better (YES), I really love Belarus on ESC, and Michael gives me Uzari&Maimuna vibes: not that extra, maybe supported… Read more »

I actually think a couple of these, with some revamping and better background vocalists, would actually have some potential. None of them are immediate standouts, but I still feel better about Belarus’s chances than Latvia’s XD

Running Away From The Sun is quite catchy, needs revamp. But guys look like they are about to have a scrap on the streets of Birmingham on the Saturday night. 😛

KeySi just made my dream come true and entered Rise by Katy Perry into the competition! 🙂

I’m pulling for KeySi as well! If she wins, she could go all the way and bring the 2020 Contest to Minsk, where it probably would have been held this year had Belarus been drawn into the Second Semifinal.

Don’t get R u serious or sarcastic? KeiSi has a good song, but not for winning Esc.

As long as the artist doesn’t want to perform naked with actual wolves on stage, this selection should be fine.

Depending on the size of his/her attributes. If they are going to get a black eye while hopping to the rhythm of their song, then no. 😛 😛 😛

Michael Soul – “Humanize” is the only decent song.

But seriously: where are the potatoes?

Mariah Gregory – “I still love you” is the best.

You forgot to mention that Michael Soul competed as a duo called The Em in 2016 https://youtu.be/_FY1O3MSUO8 which was a fan favorite, he was also one of Navi Band’s backing vocalists in Kiev

Knew I recognised him. I LOVED that song!

I’ll be honest – They didn’t pick the best ones! Angelika Pushnova should have qualified. They better not invite her as an interval act again, cause this time it would be even more annoying. Also, for laughs, the Potato song was cool enough to get a pass. NAPOLI and PROvokatsiya, on the other hand…

I watced the live auditions…although a few good ones got through, the best didn’t. I agree the potato song would have done very well for Belarus, ..here there is nothing new or exciting, and no sure qualifier.

I’d pick Michael Soul. Impressive vocals and a well-made modern song that brings out good emotions. Belarus will do well if they’ll choose him.

I don’t know how well Belarus would do with him, but I would pick Michael too. Convincing vocals, charming mannerisms and a current song with a simple but direct message.

Zena has a bop with potential.
Napoli’s is ok, but kind of jury bait.
And Emannuel, even tho I have no idea what he’s saying.
The rest is meh

Overall, it’s not a strong selection, but better than I expected.

I can’t believe the potato song didn’t go through. It would have been Belarus’s best entry in a long time.

A good nf for Belarus, some with really good potential, very pleased

I was actually expecting worse things… everything still sounds messy and noisy. I’d choose either Michael Soul because his hand gestures remind me of Mariah Carey and it’s fun to watch. Very dramatic. ZENA is decent as well and has potential but she needs to get her act together.

I mean, it’s not worse than Latvia I guess lol
“Run” was my favourite, that girl can sing! I don’t know what she was singing about tho, her English went wild… Maybe I’m just deaf.

no mariah gregory no final

Wanted to inform you that Shuma recently uploaded their music video to “Clouds”, their NF song in 2018, on YouTube – the song got slightly revamped. The new version and the video are just so good!

The next national final where I really don’t know who to support.