This evening, the 69th Sanremo Music Festival will come to a close and we’ll have a new Italian champion.

We set up a flash poll yesterday to ask you who you thought should win the 2019 edition of Sanremo. After counting 2,291 votes in total, we have a winner. Il Volo is your pick for the Sanremo crown.

The trio, who placed third at the Eurovision 2015 with “Grande amore”, picked up 530 votes, or 23.13% of all those cast. After their victory four years ago, could Gianluca, Ignazio and Piero take the crown again?

Their song “Musica che resta” is among the favourites to win the Leoncino d’Oro according to the bookies, so we may probably face an exciting showdown in May considering there is also the Russian Sergey Lazarev competing!

Silver medal for Irama and his “La ragazza con il cuore di latta”. The reigning Amici di Maria de Filippi‘s winner took the stage with a poignant song about loving a fragile girl with a pacemaker, bullied and a victim of domestic violence. He managed to get 399 votes overall, which is 17.42% of the total.

Slightly further behind in third place, and with 270 votes or 11.79% of the total is Mahmood.

His charming and modern song “Soldi” is a favourite amongst the Wiwi Jury.  The Italian artist of Egyptian descent entered the kermesse by winning a spot through the Sanremo Giovani contest, dedicated to emerging artists. But he has already managed to defeat the competition of many great artists, conquering critics, radios and music listeners.

Could he be the underdog of the competition and snatch the gold medal from under everyone’s noses?

The field opens up a lot more after that, with young songwriter Ultimo, and his delicate ballad “I tuoi particolari” claiming fourth place with 232 votes (10.13%). Italian blue-haired diva Loredana Bertè rounds out the top five, claiming 230 votes (10.04%). Finally in sixth place there’s Arisa and her uplifting “Mi sento bene” with 104 votes (4.54%). No other act managed to earn over 100 votes.

The grand-final of Sanremo 2018 starts at 20:40 CET tonight and we’ll be cover it for y’all as we did for the whole week.

Do you agree with these results? Who’s your favourite in tonight’s contest? Do you think the winner will end up becoming Italy’s Eurovision 2019 representative? Let us know all in the comments below! 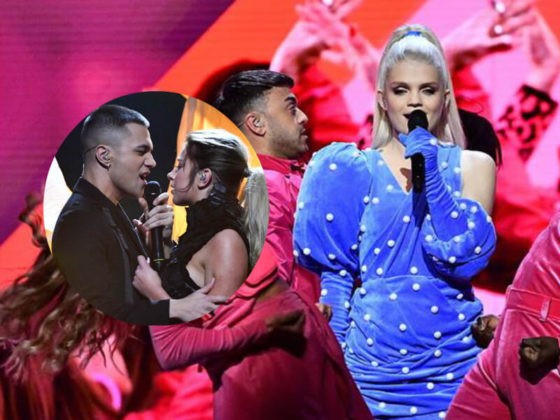 Poll results: The Middletonz are your favourites in tonight’s A Dal semi-final My favorite was Ultimo; beautiful song and voice !
It’s totally the kind of italian Music that french people love ….

Complimenti Mahmood, complimenti Italia!!A wonderful, ultra-modern song that was sung by Mahmood viscerally, it really sprang from his soul. Many, many congratulations from Athens!!!

Already we have one opera song, another one…
No thanks

I didn’t listen all Sanremo song ?

Il Volo could sing the phone book and I would like it ?

I would love for Il Volo to come back to the Eurovision, but I’m not sure if this is the song. I would want them to do at least as well as last time, and I can’t see that happening with this song. Try again another time, please!

Irama is the best choice there

What the hell people where is your taste

Italy pleaaaaaaaseeeee. One option tonight : Loredana !!! ,this song is a bomb

That’s unsurprising but their song doesn’t cut it for me. Irama to the front.

If Ultimo wins tonight then the door will probably be open for another artist to do Esc. So there’s a chance for Il Volo .
We also need to watch Simone Cristicchi who can win tonight and go to Esc. He has a very emotional song and performance.
They also have Irama, Loredana, Daniele or Mahmood.
Italy will be amazingly represented once again this year.

Why? Did Ultimo say so?

Ah okay. Btw, how do they do it in Italy? Are the winners asked on the show if they wanna go to Eurovision, or afterwards?

I think it usually comes up during the press conference held afterwarsds. But if the winner refuses, it can take up to a few more days for RAI to announce its representative

I’m guessing cause of the experience they have coming 3rd,people think they could do it again, which honestly I don’t see why they cant come 3rd or higher with those harmonies

hearing this song once, its not actually bad, and would represent Italy amazingly, it doesn’t give me the magic that Grande Amore did, but still there voices are so strong and sharp together, that it could do incredible in Israel. don’t see the hate for them, because there fantastic.

We seen lot opera ,are they doing all well

I bet majority of voters didn’t even listen all songs, they just voted Il Volo 😛

would make sense, I’m going to be real before hearing Il Volo’s song I voted for them even though I hadn’t heard any songs, just because they came 3rd.

And because they had the most experience aswell, I left that out lol.

You are wrong. Fans appreciate thier music.
Saying that is an insult to them.
Back in 2015 they were no. 1 favourite to win eurovision the fans remembers them with love.
So they vote right.

San remo gave us good songs this.
So please have respect.

My thoughts exactly. Not that there’s anything wrong with Il Volo winning the poll… Just that their song is not SO much better than others to justify that voting percentage.

Il-Volettes better give up, they are not going to win.

really???? why cant they, what’s the best choices for Italy this year, I haven’t heard any.

Which songs would you say are the best choices if Il Volo don’t win.???

Oh okay fair enough, I’m hearing Ultimo is quite good from a lot of people, but still good luck to Italy.