The hype is real, y’all! Croatia will stage their first national selection since 2011 in just a few days time.

And yesterday Eurovision HRT revealed the snippets of all 16 entries competing in Dora.

The snippets are really short — only 20 seconds each! But that’s just enough to whet our appetites for a while.

The broadcaster won’t release the songs in full until the show, as to create more suspense on the big night. The thinking goes that a casual Eurovision viewer at home usually hears the song only once. Fair, fair!

Let’s take a look at the 16 snippets competing this Sunday.

DORA 2019: Everything you should know

Unlike in previous editions of Dora, this year HRT will give us only one night. The contest remains in the same location as in the past — that’s the coastal town of Opatija. But contrary to previous editions, it will be held in the Marino Cvetkovic sport hall, which can seat around 1, 200 people inside. That’s a small improvement from 900-person Crystal Hall (no, not the one in Baku) could host in its day.

The 50-50 combination of televote and regional jury will determine the winner. In the case of a tie, the public vote will prevail. Power to the people!

POLL: Which of the sixteen snippets is your favourite?

Who is ready to follow in the footsteps of Franka in Tel Aviv? Does anyone give you winner feels…and are there some definite non-qualifiers in the bunch? Make sure to cast a vote in our poll down below. You can vote for as many songs as you like, but you can do it only one time. Click the box next to each act you want to support before pressing submit. Funny that noone expresses their like for The Dream as people do with Babylon/Brutalero, but still SOMEHOW the dream won. Thanks Jaques and HRT for rigging this selection. Poor Roko will he last

In compare to these songs, Franka’s “Crazy” was a masterpiece. I’m from Croatia and if from hundreds of songs these were the best and selected from jury, then there is no hope for Croatian succes in ESC this year or any other year in the future and we should step back. I will watch Dora and pray that the live version of any of the songs above be decent and good. For me, Ema has potential. And Lidija, even though I can’t stand her music in general. But I hope her song could be upbeat and with some catchy chorus… Read more »

Disappointing choice on first listen, the one lady sounded like Jamal’s and the rock band were dated. The only stand out was the Babylon song as it had the ethnic fantasy vibe. Overall a lot of tripe. I doubt our Eurovision winner is here.

I know these are just snippets, but man, Brutalero and Tower Of Babylon! These were the ones that immediately drew me in.

Your user name is distressing

People, let’s be honest here – These snippets are way too short to know anything for sure. Some songs sound more promising than others, but actually who knows who will be the best one on Saturday.

I agree, the costume (if actually the final one) looks cheesy and funny. Still, you might be forgetting that sometimes some of the better ESC songs had awful costumes and/or staging. (e. i. Lighthouse, Wild Soul, Dance Alone) Also, some were deliberately over-the-top. Awful, but spot-on. (e.i. Jedward). However, if this is not a joke entry, than that possibility is less probable.

For what I’ve heard, we just have a case of standard ESC lyrics. Nothing to write home about, but far from cringe. As someone mentioned, on pair with Kasia Mos. And we all know how she ”didn’t” qualify for that. Actually, half of Beovizija has way more cringeworthy lyrics, but people don’t understand them, so they just vote for the catchy tune.

Ha ha… I agree with you on Dona, it was a weak song. I’m not saying this one is good either, I’m just saying that the very beggining sounds potentially promising.

I do agree, but the snippets are enough to let us know which ones we are most excited to hear in full

Everything sounds weak to me. Sorry.. Lorena and Luka are only ones that have a chance to qualify.

uhhhh nothing stood out to me

I am voting for Luka.Roko – HVALA, NE

First of all Luka’s song sounds like Muerdéme (maybe that’s just me) and with potentially Bella Santiago and already chosen Miki, this will just blend in and that’s not what Croatia wants.
Secondly as ethnic as Lorena’s song is, something is telling me they’re going to botch up her stageshow and bring it back to the 12th Century.
And finally, how are y’all not liking Kim Verson and her Orgesa Zaimi realness?

Roko sounds like David D’or’s To Believe for Israel in 2004.

Much better.
I had a chance to hear the song. The Dream is the potential to win Eurovision Song Contest.

Duba you’re delusional, this will be a joke entry if it goes to eurovision.

That’s your opinion. I’ve been watching the Eurosong since 1998. My opinion is that the song has the potential to win. 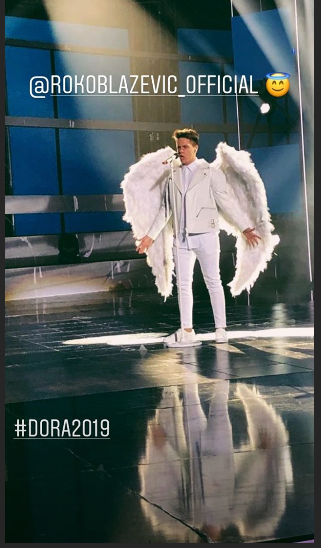 this is a joke

lmao why am I laughing at this so much??

yes its cheesy, but still, lets wait and see the whole thing and THEN we can judge

Someone was inspired by Azerbaijan 2008, it seems.

You only heard 15 seconds of the song’s beginning so….

Here’s some interesting news from another selection: Monika Marija has said not to vote for Criminal so that Light On is her only song in the final. I get it: the two could cancel out and she obviously prefers that one (and so do I!)

And, even bigger: in less than an hour, Greece will reveal their Eurovision participant (AT LAST!). I hope it’s Katerine Duska, as the rumor suggest.

Where did you get this Information and where will it be revealed?

Another site that starts with a Euro and ends in a voix. They said 20:00 and the Wikipedia article has already been updated to say it’s Katerine Duska.

And that was taken away. So who knows?

Surely it’s not too late for her to withdraw Criminal? Inevitably she’s on track to split her televotes

You think she’d get fined, like Sasha Song was?

No, because she didn’t officially withdraw Criminal. She simply gave instructions to fans and the jury to let it go, so the televote in the finals wouldn’t be split. There is still a decent chance that fans and juries will not listen to that and that Criminal will qualify. There is now a lesser chance that she’ll win the semi, but she still might get through.

Roko has a song that will compete for Eurovision victory.
Magical song.

why do people like roko? it’s awful lmao, the lyrics are so cringe and cheesy

Jacques and Roko are sending their fans to spam vote on the poll
half of those people didn’t even hear the other songs smh
Just pretend he doesn’t even exist on the poll, Luka and Lorena are much better than him

Really? Roko’s lyrics are under inspection when one of the fan-favorites has a song which consists of random pseudo-Spanish words?

Well, “dream-extreme-seem” isn’t the most sophisticated kind of rhyming – it brings back memories of Kasia Mos’ “fire-wire-desire”.

guys, just keep in mind that Luka put the chorus in the snippet while some others like Lorena or Roko put the beginning of the song so I wouldn’t be surprised if everyones top 16 completely changes after Saturday…

Tower of babylon is so cringy I can‘t, dislike this comment as much as u want boo

I would put my bet on Lorena or Roko. I see both of them high in the Finals. I would prefer Lorena! Her songs seems so dramatic and mysterious and I’m intrigued! She can take this song to the whole new level with EPIC performance! Can’t wait for Saturday!!!!!

Roko and Lorena are the only ones with a real chance.

The mello snippets are out now!

It’s hard to make assumptions based on the snippets, but Lorena’s “Tower of Babylon” is the one making me curious.

Redemption and Brutalera all the way, but there are other songs in there that could be nice winners. I hope Croatia doesn’t mess up like Montenegro:

Better then Czech Republic and Montenegro yes but others not. It’s a weak NF

I think Albania’s really good and Czech Republic is OK. The rest I agree with.

Still an improvement, past Dora’s were stuck in the 90’s

OMG please if Luka does win, please when he says ”fusballero” (?) make him have an actual football in his hand. That goes so hand-in-hand with their World Cup achievement haha and Im sure Croatia would love that

I really like this selection. Best of balkans, unless Slovenia chooses Kim….

brutalero, tower of babylon, i believe in true love n redemption were the ones that stood out the most for me

Nice selection you’re having Croatia! I really enjoy most of the songs, it’s going to be a diversed show. I guess “Tower of Babylon” to me sounds the most promising – I really like it’s oriental vibe – kinda Turkey 1997, Croatia 1999 or… the theme tune of Eurovision 2012. Good luck, Hrvatska!

It’s really hard to say from the snippets alone, because they are SO short, but I feel like Roko, Lorena and Jure have potentially really good songs. They are the ones I might vote for on Saturday. I get why people noted Luka’s song (It’s very different), but feels just really nonsensical from the snippet. I am sure Kim Verson will have a great live, but I am not that intrigued by her song. Lidija Bacic will probably serve us another cajka (look at my Serbian reviews to find out what that is).

I am a Croat and of course I do recognize the style. So what, it’s a good style and a tribute to a great man. I’d rather have that than something of a lesser quality.

The first snippet. But 20 seconds are nothing. Bernarda could be good if the lyrics don’t turn out to be too bad. Her entry about god in the Swiss NF a couple of years ago was dreadful.

The one and only original music snippet comes by JELENA BOSANCIC – TELL ME, hopefully the rest will grow

I really like, the Dream this sounds very promising. Can’t wait to hear tower of Babylon and brutalero ??? But a very good selection!! Better than Serbia and Ema this year

It’s hard to say something based on such short snippets but I think that I kind of liked the snippets of Roko, Lorena and Luka.

I feel sorry for Croatia this year.

Jake
Reply to  oh my

Why, this is very decent NF based on this snippets.