We’re well on the road to Tel Aviv and Eurovision 2019. But before running orders, pre-parties and the like take over, Team Wiwi takes its annual look back at the national final season. This year saw the return of Dora, whilst Australia Decides made its debut.

We even had a national final that didn’t even select a Eurovision act in the end (more on that shortly…)! But which song will follow “Sting“, “Cool Me Down“, “Spirit Animal” and “OK ou KO” in to our NF Hall of Fame?

Over the next week, we’ll be covering the top 25 songs of the national final season, as voted for by our wiwibloggers. These are just our favourite songs that didn’t make it. We’re not saying they should have made it through — just that we enjoyed them!

And on the topic of Vidbir, we decided to allow all songs to be voted on (including “Siren Song”). We decided that as none of them got to advance from the national final, they were all fair game — and this is just about fun and celebration.

Whilst OT 2018 didn’t exactly ignite Spanish passion as much as its 2017 edition, the OT Eurovision Gala certainly brought a marked improvement on the previous year.

Miki would ultimately triumph convincingly with “La venda”. But his duet with Natalia — whose “La clave” also had many fans — also performed well, finishing 3rd on the night. Here, it just misses out on countback in our rankings, but we wanted to give it a shoutout anyway!

With easily some of the trippiest staging of the national final season, “Mr. Unicorn” might not have featured any mythical beast, but it was a feast for the eyes nevertheless.

Well established in their native Norway, D’Sound certainly offered something different from the rest of the MGP field. They failed to make it through the second round of the contest, but nab the first spot on our countdown at least!

There was certainly a new feel around Eesti Laul this year, with a new head and new rules allowing for foreign songwriters to come in. Whether it was overly successful or not seems to still be up for debate.

But the rules don’t really explain the downfall of pop group Around the Sun. “Follow Me Back” was a top 3 favourite both with the Wiwi Jury and our semi-final poll. But clearly that sentiment wasn’t shared in Estonia: they somewhat inexplicably finished second-to-last in their semi.

A whole lot of soul and a whole load of vocal. The Divaz were powered by the late, great Queen of Soul and certainly lived up to their name on stage. From their fabulous red frocks in the semi-finals, to their glitter and matching jackets in the final, they caught the camera’s eye with ease.

Any fears that this could have been an overly gimmicky song were cast aside. Here’s hoping that we see more of The Divaz at Destination Eurovision!

Whilst the Destination Eurovision lineup might not have inspired as much hype as the 2018 cast did, the songs certainly proved to be just as strong. Aysat’s energy and commanding of the stage helped push the energetic, frantic “Comme une grande” further.

Inexplicably, the French public never really seemed to get behind Aysat — somehow placing her last in the public vote in her semi-final. But much like the jury loved her, Team Wiwi did too, giving her a spot in our rankings.

Too much of a great thing? Monika Marija looked to double her chances at Eurovizijos this year, entering two songs – “Criminal” and “Light On” – in to the process. Both got a strong reception from fans…and therein lied the problem.

Monika was forced to pull “Criminal” from the competition, leaving just “Light On” in the running to give her a better shot at victory. It didn’t pan out that way though. And perhaps as could have been in Lithuania, Monika’s two songs both got votes from the Team Wiwi members, perhaps splitting the vote and leaving her in 21st place in our rankings.

Those are our first five songs in our countdown. Are they some of your national final favourites? Let us know all your thoughts in the comments section below. 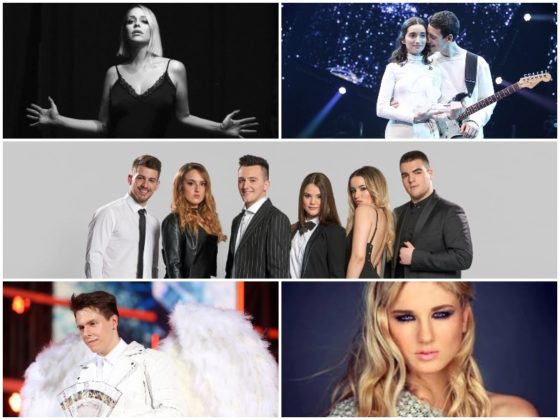 POLL: Which country of the former Yugoslavia has the best song at Eurovision 2019? We are technicolour! Michela’s “Chameleon” lyrics remind us of our capacity to overcome

Thank you so much for putting “La voix d’Aretha” on here! I knew it wasn’t gonna win the NF, but I’m just happy it made it to the final at all.

My love for D’Sound resurfaced after finding out they were taking part in MGP.

So far, I have D’Sound’s “Mr. Unicorn”, “Lykkelig” (with Armi Millare from my home turf doing vocals), and their classic “Tattooed on My Mind” playing on repeat in my Spotify. Hahaha

Thanks for including Nadie De Salva as Honorable Mention. It’s one of my favorites this NF season.

National finals in 2019 had some real gems, yet often they didn’t pick the best songs. Hence, there is a lot to list in this section. Many of these songs will remain among my favorite ones of the year. It’s hard to pick only 25, but here we go: 25. Florina: In the Shadow (France) – Radio friendly and mystical, if only the performance was as polished. 24. Calema: A dois (Portugal) – Very catchy and melodic, only this is – Portugal had Conan! 23. Oliver Berkes: Vilagitotorony (Hungary) – Hungarian jury did a lot of mistakes, and here is… Read more »

I wrote a comment, but got filtered. So you’re just going to have to guess what I think about this top 25. 🙂

Ha ha ha 🙂 I know you love Vilagitotorony. Not sure about the rest 🙂 As you see, I updated my list for short comments.

Should I guess or will you tell me? 🙂

I thought the song’s quality would’ve made it obvious!
…I’m with Purple Mask on this one. 😉

Comme une grande is much better than overhyped Monika. Aysat was THE performer.

Do you want spoilers? But you know me well enough to sense this is a possibility. 🙂

These lists always seem to be so random.

Mr. Unicorn is really that low?

All great, “Mr. Unicorn” (funky, different and one of the coolest staging this year), “Follow Me Back” (upbeat and radio-friendly), “La voix d’Aretha” (those voices! that energy!), “Comme une grande” (c’mon, 7th place? easily my favourite of the eliminated songs, urban, multicultural, hypnotic and energetic) and “Light On” (Lithuania… really?). Oh, this series is gonna hurt.

Monika from Lithuania was not forced to pull one song out. She decided it herself and it killed her.
So many lithuanian people were voting for song Criminal in previous shows. People simply did not like the fact
she took one song out to increase her chances. Jury was quite sceptical about it, that is why Jurijus won.
I strongly believe Monika Marija would be much better contender this year than Jurijus.

Criminal were always finishing 2nd behind Jurijus in all previous shows. With juries and televote.
Lithuanians just like more Jurijus than Monika this year.

The Divaz deserved at least a top 10 !

Monika Marija :'( Lithuania is going nowhere with Jurijus… not a bad song but nobody will remember it at the end because he has nothing impressive in his song. At least Monika has a great voice.

Hope to see Maruv at the first place of this top! 😉

If they were competing this year, it would be the strongest Eurovision in years.

If Maruv is not number 1 idk anymore

Light On not in the top 5? oof

I don’t, have never and will never understand why Aysat had such bad placement. There was nothing about her, the song and the performance that I disliked.

Of course The Divaz! Every single time when a person says ridiculous stuff or is violating others (e.g. on Eurovision blogs ^^), I put on my glove and whisper to him: “Oh, oh, give me a little respect” 😀 😀