They are both serious candidates for the Eurovision’s Next Top Male Model 2019 crown, and in recent days they met in Tel Aviv for fun-in-the-sun and some deep exchanges about music.

Azeri 2019 hopeful Chingiz Mustafayev and current Sanremo winner Mahmood flew to Israel on April 9th to shoot the postcard that will precede their performances on the stage of the Expo Tel Aviv.

Among the various engagements, the two competitors have found the time to explore a bit of the sunny Israeli capital, have a little chat and sing each other’s songs “Truth” and “Soldi”.

The boys gave their personal touch with vocalizations and finally snatched our wigs with their genuine and beautiful smiles! Mahmood also greeted Chingiz at the end with an iconic “Bella zì!” − a typical expression from the Milanese lingo. Is this the beginning of a friendship?

Thanks to the KAN Eurovision Twitter channel we also got a quick preview from the rehearsals of the postcards that we will see on TV.

Chingiz is joined by the dancers who last year performed with Netta Barzilai in the triumphant “Toy”. Will they bring him luck?

?? More vids! This time we get a glimpse of Chingiz and his incredible postcard dance crew. Can you recognize any of the dancers? ?#KANpostcards #Eurovision pic.twitter.com/Gq5sEsorNG

?? Keeping you posted from the studio, we have a personal message for you from Chingiz from Azerbaijan! ???#KANpostcards #Eurovision pic.twitter.com/9SYwcALm7I

Mahmood instead is coming to fight for the crown as shown by the preview that sees him walking towards the camera with boldness.

?? 3 artists are doing their postcard rehearsals today, and the first one is @Mahmood_Music from Italy! Here's his first update from Tel Aviv ???#KANpostcards @EurovisionRai pic.twitter.com/Gx5zRsLriJ

The news linking the two representatives do not end here. With the release of the official Eurovision compilation − featuring the 41 tracks in the competition − the Eurovision versions of “Truth” and “Soldi” were also unveiled, as we will hear them on the Tel Aviv stage.

The two songs went through subtle cuts, which do not alter their structure. For example, both the intro of “Truth” and that of “Soldi” have been shortened.

In the Azeri track the second repetition of the bridge (“I don’t need, I don’t need the truth”) was eliminated, and the song ends without fading out.

Are you curious to see Chingiz and Mahmood performing in Tel Aviv? Which song do you prefer between “Truth” and “Soldi”? Let us know in the comments below. Albania’s Jonida Maliqi: “The song is personal to me, my sister also left Albania” Jeez, how much thirsty are you on scale from zero to wiwibloggers?

Mahmood is not just Soldi,all his songs are amazing. To enter in Mahmood’s world,please listen to these two songs of the album “Gioventù bruciata” performed by mahmood live.. how can this boy be so magnetic ?
https://youtu.be/-w5pbp3d-yQ
Live asia occidente – Mahmood
https://youtu.be/I0GbfjV8hdc
Il nilo nel naviglio mahmood live radio2

and suddenly i saw them in my dream together with me in bed!!! 😛 i think they would like it too jajajaj 😛

Please wiwibloggs can you put also the interview mahmood gave to KAN 11 with subtitles in English too?
I don’t understand the questions… Thank you
https://youtu.be/bvHWoz1dBk0
Interview Mahmood KAN 11 Israel

You have a mistake there. Tel Aviv is not the capital. Jerusalem is.

They look great as a couple

Disgusted by all the sexual comments here. If men were talking like this about women, there would be no tolerance for it. Objectifying these lovely men is pointless, appreciate what they’re here to give: the music! Peace and love

Indeed, the contest changed, poor artists have to make nude pictures and these fake pictures together just to please fans.

I remember thinking the same thing in 2017 when an important contributor to a rival ESC site described Azerbaijan’s horse-man as “very do-able”. I may well have said and thought the same things myself but now I feel differently.

Am i the only one who cringed at Chingiz cover? That was a bit extra imo 😀 Mahmood asking “You listened Soldi?” In a childish voice was so cute lol ^^

Dear Mahmood, can I borrow some of your coolness? If no, where and how can I get some? XD I really love this dude, been listening and following his work since Sanremo and his songs are literally my music taste! You deserve all the spotlight, darling! Wish you all the best for the future, you have already taken a big permanent spot in my playlist and I am so happy for that! As for Chingiz he seems like such a lovely guy and his song is my favorite bop this year, so best of luck to him too! Ps: Soldi… Read more »

Mahmood has a special gift, when you see him singing and talking then you can’t stop thinking of him; charisma, magnetism… I don’t know the word to describe this, but all, men and women, feel that about him.
His style, his songs, his voice, his smile, his way to be sexy but sometimes childish, his mouth, the way he is so emphatic towards people… he became an icon.
Mahmood is my mood!

I’ve listened so many times Soldi that it’s a bit harsch to get the “sai gia come va” part removed.
Maybe removing another verse would have been less noticeable and at least only getting once this part remaining..
(sorry to talk about the song and not something else guys ?)

The silent part on the bridge should’ve been cut, IMO. Now it sounded a little awkward.

Where is the Sean Cody logo? 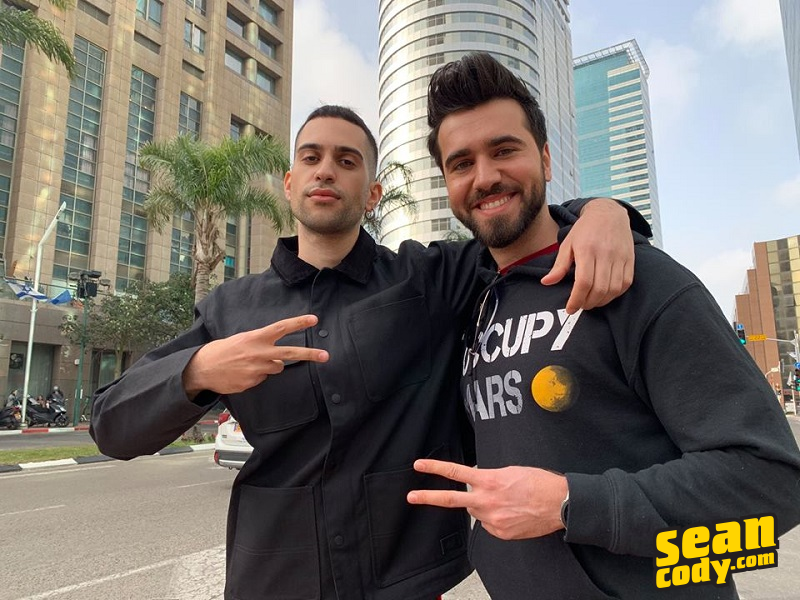 That would be hot scene

First was when Mahmood was discriminated in his home country for being half-Egyptian, now this? You people are disgusting for disrespecting Mahmood like that. Also towards Chingiz.

So so so happy that the Arabic part stayed! It is my favourite bit!

I have a crush on both Mahmood and Chingiz 😀

I see no chemistry here. I think Mahmood will vibe with Conan the best

The edit of Soldi has not hurt it all!

it feels awkward, before revamp was much better

Nobody will notice the difference, why? Most of people will listen at Soldi for the first time during the final.

All aboard indeed – the ship has set sail.

Lorenzo should watch out lol

I mean Mahmood’s lol, my brain completely skipped a passage

No, that wasn’t the least bit homoerotic ;p

Bella zììì!!
I was drinking some tea when I heard it, I spilled everything from my nose lol

I need their s*x tape to leak 😛

To every God from every mythology I ever studied:

Make these two cute nerds to do an actual collaboration.

I’m a no meat-eater, so no animal sacrifice, but…would make it with a lettuce?