Every day between now and the grand final in May, the team from wiwibloggs will be rounding up the latest titbits from the world of Eurovision 2019. We’ve trawled through Instagram, Twitter and elsewhere so that y’all don’t have to. This is the Daily Digest for Monday the 6th of May.

Rehearsals day 2: Who’s upped their game, who needs to step up?

With the rehearsals of the first semi-final continuing on Sunday, this year’s Eurovision season is getting closer to its climax. Another eight acts rehearsed on stage for the first time yesterday. But who managed to exceed your expectation, and who needs to add some adjustments? Let us know in the comments below! (Florian)

A couple days ago, we mentioned S!sters’ performance on the German morning programme ARD Morgenmagazin. In Carlotta Truman’s latest YouTube video, there’s further insight to their stop at the studio. You get some behind the scenes impressions… plus very a funny and relaxed Carlotta and Laurita! (Florian)

Bilal Hassani takes his promotional tour to the French TV show C’est au programme. He used the opportunity to perform an acoustic version of his entry “Roi”. The show hosts chat with him about the story behind “Roi”, Bilal’s Eurovision journey, and of course his very brand album Kingdom. (Florian)

Kate Miller-Heidke reveals the man behind her gown

Australia’s Kate Miller-Heidke had the first rehearsals of “Zero Gravity” yesterday, and with it fans got the first glimpse of her new costume. The singer has now shared more details about the dress with Vogue Australia. The dress was designed by Sydney-based designer Steven Khalil — the man who was also behind Dami Im’s “Sound of Silence” costume in 2016. The dress took over 100 hours to make and was designed to convey the “interstellar” feeling of the song. (Robyn) Hatari show us their ball

Hatari also had their first rehearsal yesterday and unveiled their new staging, including a giant metal cage. Icelandic broadcaster RÚV has revealed the story behind its construction. The prop is based on the logo of Hatari’s holding company Relentless Scam Inc. — an orb surrounded by saw blades. It was designed by Kristrúna Eyjólfsdóttir and built by Stefán Finnbogason along with RÚV crew. The ball was sent to Tel Aviv last month, to ensure it would be assembled correctly — the first time RÚV has needed to send a prop early. Watch the construction video here. (Robyn) What does an Icelandic costume designer do when she needs to pick up a few extras in Tel Aviv for a BDSM-inspired performance art group? Hatari’s costume designer Karen Briem paid a visit to a local sex shop to find a black cropped jacket for Matthías. Iceland Music News trailed along to the Aladdin’s cave of leather and latex. (Robyn)

Besides Eurovision, Spain’s Miki is also in the middle of the Operación Triunfo 2018 tour, with all his mates from inside the academia. On Friday they had the second concert of the tour in Pamplona — the city where Amaia comes from — and the 16 participants of OT 2018 rocked a full stadium. That’s great preparation for Miki, who will fly to Tel Aviv shortly and will perform in front of over 150 million people. (Luis)

On Saturday, Cyprus’ Tamta had her first rehearsal on the big stage at the Expo Tel Aviv. Her team are working hard to make sure all adjustments are ready by the second rehearsal, so Tamta is taking some time off to relax in sunny Tel Aviv. Of course, she didn’t forget to bring some boots with her! (Florian)

… and goes acoustic on local radio

Tamta also paid a visit to Tel Aviv radio station 100FM. There she performed an acoustic version of “Replay”, showing that the song works just as well with a gentle guitar accompaniment as it does with the bombastic synth-pop of Eurovision. (Robyn) 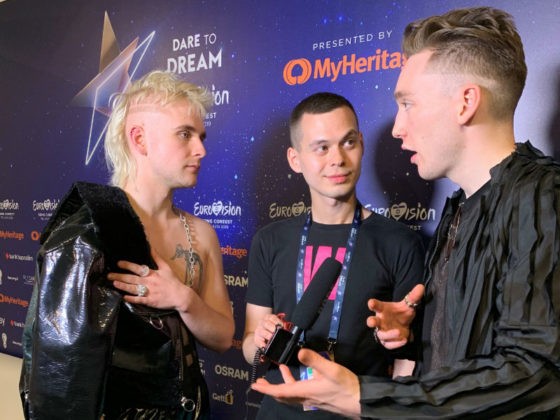 Hatari: We have the power to address the absurdity of having Eurovision in a country that’s scarred by conflict and disunity Great news! Emilie Satt, member of the group “Madame Monsieur” who represented France last year, and having co-written the song “Roi”, will be this year chorister por Bilal! source: the French newspaper “20 minutes”, which closely follows the French delegation.

I didn’t know Bilal is SHE, and why she keeps promoting in France? That proves she cares about her own career after ESC, not ESC itself.

Well of course shecares about her own career, there is a life after ESC too, you know!

Bilal uses he/him pronouns. The article just did it wrong once by mistake, but uses he/him in the rest of it

Because ESC is a two-week affair. Bilal will be there in time for rehearsals.