After weeks of chatter, behind-the-scenes strategising and, in some instances, a bit of political in-fighting, the Eurovision 2020 host city candidates finally submitted their bidbooks. These are their portfolios explaining why they deserve to host and proving that they have the capacity to pull it off.

Officials from Maastricht, Rotterdam, Utrecht, Arnhem and ‘s-Hertogenbosch (also known as Den Bosch) delivered their bidbooks in style. Officials from Maastricht arrived with champagne and pink cakes, while the good folks from Den Bosch brought a local speciality — the Bosche Bollen (essentially profiteroles filled with whipped cream and coated with chocolate fondant icing). Arnhem, which is running with the slogan “Celebrate Freedom”, even brought a former contestant from The Voice.

But rest assured: Dutch broadcaster NPO won’t be basing its decision on sweets or guest performances. They’ll be looking at the cold hard facts within the bidbooks. As AD.nl reports, NPO will tell those cities that don’t have a realistic chance of hosting the bad news by the end of July. They’ll then conduct site visits in the remaining candidate cities in early August.

Executive producer Sietse Bakker stressed some of the key criteria. He said: “You produce perhaps the most complex TV show worldwide. It is important that you have a location where you have the space to do that. And then the city itself: do you have the hotel rooms and can you handle the logistics so that not only the visitors but also all kinds of other people who attract it can stay in the city center?”

Another big issue is money. He pointed out that the host city benefits from the mass exposure and influx of tourists — not just during Eurovision, but also in the years that follow. As such there’s a heavy financial burden that the host city is expected to pay.

Our sources in Hilversum tell us that Maastricht has been working on a plan to host Eurovision since as far back as 2014, when The Common Linnets made it clear that the country was back in the song contest game. They’re also known to have deep cash reserves available to fund the event. The mayor Annemarie Penn-te Strake attended the event and stressed that it is a “compact city and it’s very intimate,” which would give the event a unique feel.

Their candidate city promo video “Come Closer” captures the intimacy and beauty of the region — taking us through nature to a wedding, a university and even an outdoor festival. The video nods to the EU flag, the region’s famed vineyards, fashion shows and more.

Rotterdam, which is considered the greatest challenger to Maastricht, has the best music venue in the Ahoy. It also has pledges of financial support from the surrounding province, and has been endorsed by Den Hague and Eurovision winner Duncan Laurence.

Its delegation arrived in black-and-green scarves that said: “Rotterdam. Make it happen” and “Rotterdam. For Real.”

Their promo video channels a distinctly urban vibe, which it describes as “the new Netherlands.”

Elsewhere Arnhem has convinced the Vitesse football club to let them borrow the massive GelreDome for the song contest. And Utrecht wants to hold the festival in a tent next to Jaarbeurs. That’s the exhibition and convention centre which they wanted to use, but which they later learned doesn’t meet the required ceiling height.

Which city do you think has the the most momentum? Where do you want to shimmy and shake in 2020? Let us know down below. What about Cardiff? It has the largest indoor arena in the whole UK I think – 80,000 capacity stadium – that would be a fantastic location for Eurovision and it might make the ticket prices more inclusive!

I really want Rotterdam to host!

What if we just tried our best to win the songcontest again and then both Rotterdam en Maastricht could get it their way?(yes this is excluding al the money it will cost the NPO and stuff) I at least hope that we send an entry that will end up higher than last place like most years with winning countries

Edinburgh actually hosted Eurovision in 1972 when Monaco declined hosting after winning the 1971 contest. Liverpool is actually famous because of the Beatles.

It will be Rotterdam, Although I must admit I’m quite impressed by what Maastricht has to offer. Looks like s charming city and could host a decent show in 2020. Maastricht is a city I often overlook in my travels but I think I will need to visit, even if it’s not chosen. Rotterdam, as the nations second city, best venue and probably hotels transport links etc will be the winner I am sure. Dutch tourist board seems to be pushing Rotterdam as an alternative to Amsterdam, not just in Eurovision but in other media too, Rotterdam seems to be… Read more »

Interesting. Arnhem and Rotterdam being the ones with presumably strong bid and Maastricht being the most passionate.

I think Edinburgh would definitely host if the UK winner was Scottish, or Glasgow.

Edinburgh and Glasgow have hosted Eurovision events before in the past, so I don’t see why not.
I’d love to see ‘Scotland’ participate on its own though in the future. They have a great music scene but don’t really get given the chance thanks to those in London.

Glasgow is like the scottish version of tel aviv. Their most hip city. I think they would host in that case.

I really don’t know where i want it, i mean the arena in Arnhem is great, but there’s nothing to do there for visitors who are staying there for a week. Rotterdam & Maastricht for example are more fun places to visit…. but we’ll see

Don’t discount Arnhem. It has beautiful old architecture and modern architecture, a world-class concert hall (Musis Sacrum), diverse restaurants, nightlife, a fashion district (Duncan’s stage outfit was produced here), the Sonsbeek city park and many others, the most beautiful national parks of the country on its outskirts (Hoge Veluwe and Veluwezoom), two of the country’s best museums nearby (the Kröller-Müller museum and the Openluchtmuseum), and the best zoo. And it has a very central location from which other interesting places can be reached in 10-30 minutes (Nijmegen, Utrecht, Deventer to name a few). Amsterdam is one hour away. Maastricht itself… Read more »

Rotterdam for me. I like Arnhem too, it seems the only other city properly serious about hosting. While Maastrich, Utrecht and Den Bosch seem to be more for the lols (a tent, seriously) and the chance of attract tourists.

I feel like London and Berlin are back up locations for when a winner can’t host hence they’re not in the running when the UK and Germany win. Also London is so overbooked in terms of venues, like Amsterdam

Realistically, only Arnhem and Rotterdam have suitable venues so the others are desk rejects. Rotterdam is the bigger city, Arnhem has the bigger venue, where the likes of Madonna, Helene Fischer, Justin Timberlake have performed. Both have good infrastucture, but Arnhem has a more central location in the Netherlands and at least 4 busy airports in a one hour radius (Schiphol, Eindhoven, Düsseldorf, Weeze) compared to one busy (Schiphol) and one very small (Rotterdam The Hague) for Rotterdam. Rotterdam has more hotel beds in the city itself, but the Arnhem area (especially the Veluwe area, including the Bilderberg hotels) should… Read more »

I hope Rotterdam, defo! But how brilliant it would be if Amanda Lear made a stage-performance, whatever city takes the ESC-crown! I mean: it can’t be worse than Madonna. I’ll vote for her to go back to the stage: she’s an icon!

I choose Rotterdam, because it’s the easiest name to pronounce from those five lol. Just imagine if ‘s-Hertogenbosch was chosen as the host city, and the ESC2020 contestants try to say “dank je ‘s-Hertogenbosch” at the end of their performances. That would be a Luca Hänni “thank you tell-a-weave” moment lol 🙂

It would be something completely unexpected and out of the box so thats why I wouldnt mind at all. Same with Russia. I would prefer Saint Petersburg hosting.

They’ll just call it Den Bosch, like everybody does. That’s not hard to pronounce.

Why did Utrecht even bother ??
I am.hoping for a Surprise win , I don’t know why !! Maastricht or Arnhem for the win ??

Den Bosch isn’t winning , no one comes to watch even the tennis event

Maastricht pleaaase
As far as posible from Central Netherlands

other cities: numerous delegations arriving by special decorated buses with local sweets and high fashion models, presenting reasonable projects and having financial support provided
Utrecht: one biker will do. Oh, and also, we want to host it in a tent in the parking lot. Yep.

Rotterdam. I love the urban vibe from the video. ESC 2020 could be really refreshing from all other years

Utrecht wants to host the event in a tent?… A TENT?!?!

My God, Rotterdam is a concrete jungle.

where dreams are made of

It was severely bombed in the Second World War, that it is why the downtown area has a different, more modern feel, than other Dutch cities. 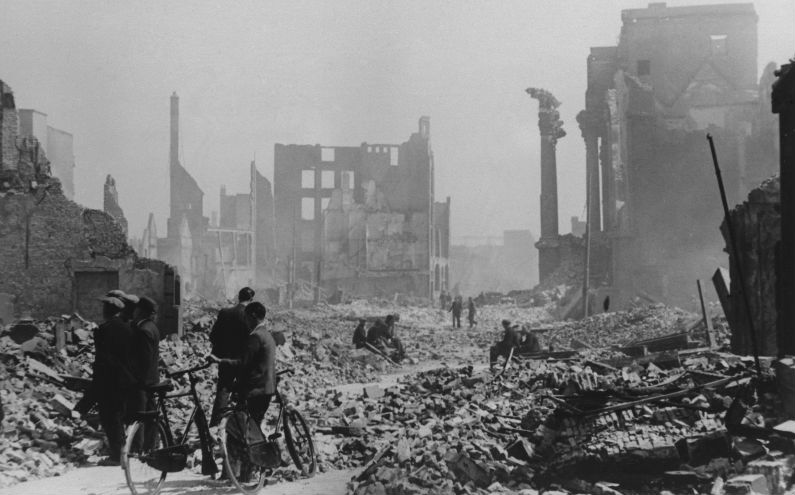 Rotterdam used to look a lot more like Amsterdam, until it got bombed in 1940. The people in charge decided to rebuild the city in a different way. 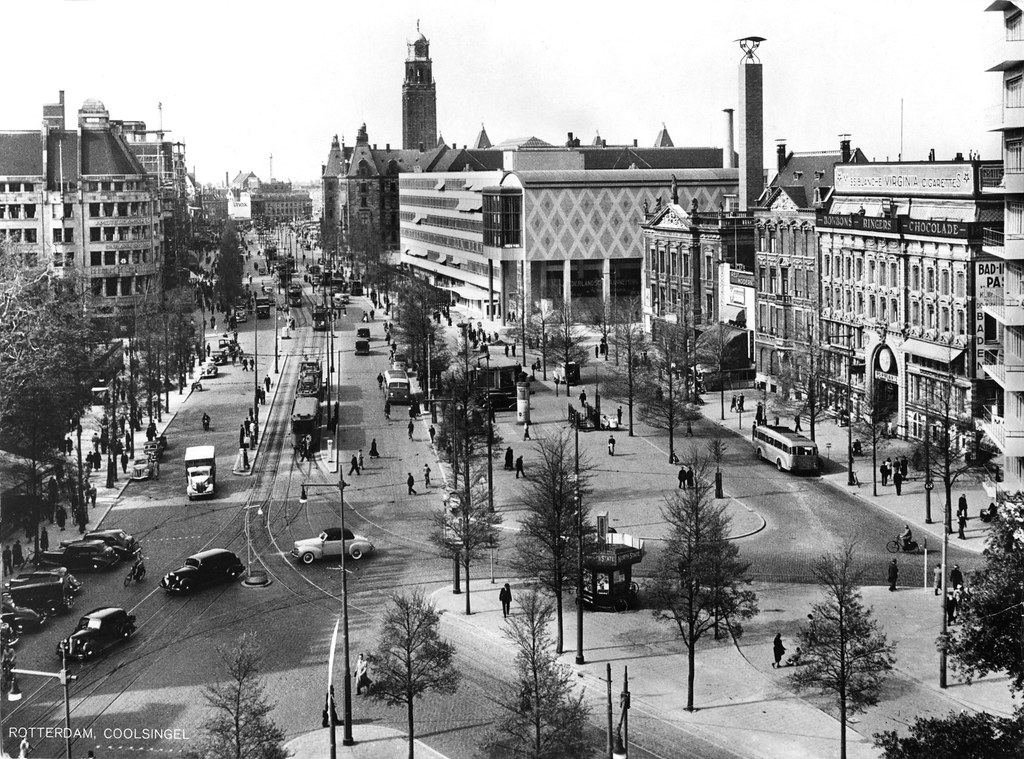 This was Rotterdam before the bombings.

Videos are nice but none gives real information.
That first guy was funny : Oooooh Oooooh, I’m losing this game.
I can’t stop laughing.

I’m loving all the buzz around the host city! Super glad that all the cities still running take it seriously. I however still believe that Rotterdam is the only logical option.

I think more attention is being paid this year because this is the only real source of “hosting eligibility” drama this year, unlike the summers of 2016 and 2018.

Rotterdam please. The venue of Maastricht (MECC) can hold up to 20.000 people.. divided in three halls. Also there’s the roof issue, it might be too low. (believe the requirement is 18m and the roof there is 17.5m). Maastricht is a beautiful location for sure, but Rotterdam has the appropriate venue. A modern city & is well connected to everything. Also has plenty of hotel rooms. People can go to Amsterdam in an hour.
My personal choice would be Rotterdam, but we’ll see what happens. 🙂

Surely Arnhem because of the stadium? We usually have arenas that are too small. It would be cool to have a venue big enough where everyone can get a ticket.

Isn’t it suspicious that maastrichts video features everything and the kitchen sink, but without the most important thing…THE VENUE…Mecc is wrong for eurovision and the EBU will see that when they visit so id be suprised if we didn’t hear Maastricht being ruled out soon. Rotterdam or Arnhem for 2020

True. Can’t fault their passion though.