The Wiwi Jury — our in-house panel of music unprofessionals — continue our journey through the 2010s by visiting 2017’s shock third-placers, Sunstroke Project from Moldova with their bridal-staged and shamelessly poppy entry “Hey Mamma”.

After Moldova’s appearance at the Eurovision Song Contest 2010 with Sunstroke Project and their collaborator Olia Tira, band member Sergey Stepanov became somewhat famous for his thrusting moves pulled whilst playing the sax on stage. He became the Epic Sax Guy, where a ten-hour clip of his sax-solo on repeat emerged. They had come 22nd in the contest that year, but it didn’t stop people wanting more from the meme king.

The trio announced their return again to Moldova’s national final for 2017 and brought the fun and energetic “Hey Mamma”. The song stormed to victory in the national final, and was soon followed up by a cheeky and rather well produced music video. One thing nobody could have predicted though was how much the televote would love these guys, taking them from a less-than-perfect position from the juries to Moldova’s best ever result. Are the Wiwi Jury still tapping their feet along? Read on to find out…

Antranig: Eurovision 2017 was the weakest edition of the decade. I only loved one song in the final (Azerbaijan) but Moldova’s top-three result was my favourite moment of the night. The minnows of the east delivered some of the best staging of the decade, second only to “LoveWave” and “Zero Gravity”, and were completely worthy of their result. Bouquet microphones are among the best props of the decade too. “Hey Mamma” personifies everything I love about Eurovision.

Edd: “Hey Mamma” is undoubtedly my most surprising entry to reach the top the in the 2010s. Whilst the song may be fairly basic – both musically and lyrically – one can never underestimate the power of the sax. What’s more, the stage show was absolutely on point – the funky foot stomping looked almost as memetastic as the original epic sax moves, and the brides add to the “wtf” factor. All in all, a very Moldovan affair, and whilst I do prefer their 2010 entry, it’s great to see there’s still a place for guilty pleasures in Eurovision.

Lukas: Sunstroke Project returned with a bang and well deserved third place overall. This song is so fun and catchy that to this day I can’t get it out of my head. The performance is very entertaining and who could not love the Epic Sax Guy who impressed us all for the second time. We need more songs like this one in the Eurovision because party songs are never too much.

Natalie: Moldova, we love you so much. I remember writing this one off as pretty much a borderline qualifier leading up to the contest. I was an idiot. It was amazing. The choreography was perfect, the sax riff was so good, and the charm of the band shone through so much that I forgot “Run Away” had even happened. I’m still a bit iffy about the song’s theme, but I can totally respect how much Sunstroke Project put into this, and third place is a very handsome and well-deserved reward

Katie: Sunstroke Project are the perfect example of how a comeback goes right. When I listen to “Hey Mamma”, the Epic Sax Guy meme isn’t what first comes to mind. His part in the chorus feels so natural and the choreography involving the saxophone works so well. Nothing about the song is forced, or presented as “Run Away 2.0”. That being said, it’s important that they embraced the meme-factor so that they didn’t take themselves too seriously onstage. It allowed them to have fun. Though the live vocals leave a lot to be desired, their comeback song is modern and fresh and has earned its rightful place in the playlist of any good Eurovision party. I hope to hear “Hey Mamma” at many a Euroclub night to come.

Tom: Hey! Hey you! I was very nervous when the Sunstroke Project returned as they were such a hit back in 2010. I was cringing when I first heard the song and saw the video. Basic. Of course there was going to be a sax solo in the middle and it was obvious that it was going to be the focus of the song. Been there, done it.  HOWEVER, only when I saw them sing “Hey Mamma” live did the penny drop and they took me back to why I loved “Run Away” in the first place. They are infectious, they are fun, they don’t take themselves too seriously and they get everyone moving! Every year there needs to be a song like this. 100% entertainment.

We have removed the highest and lowest scores prior to calculating the average. This is to remove outliers and potential bias. We have removed a low of 3 and a high of 9.5. 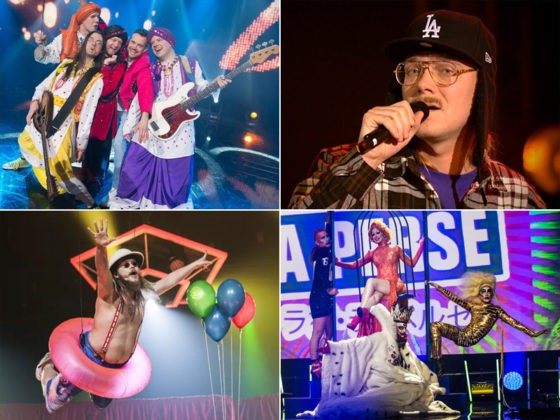 Finland: 10 of the most unforgettable acts to have participated in UMK I’d give it 10/10. The staging was so simple yet affective, with a dance we can all do. I carried on enjoying it all summer in 2017, whereas I haven’t heard Loving For Both of Us since May 13 that year. Please can it be burned onto a DVD (along with Spirit In The Sky) and the DVD sent to the BBC’s Eurovision office.

I wasn’t a fan of Eurovision 2017, but they definitely were a highlight. A well deserved top-three finish.

I enjoyed the performance, it was very funny. But third place was a little bit too high for me.

After Portugal (1st) and Bulgaria (2nd), how dares a light hearted song to be 3rd? We all know Eurovision must be full of requiems.

I quite like 2017 as a Eurovision year but mainly because it had two of the best ever ESC songs in the top two positions. After that, there was a BIG drop off in terms of quality. There was a severe lack of depth in 2017. This is fun, well-performed but definitely not one of Sunstroke Project’s better songs. If Italy, Belgium, Netherlands and Australia had delivered better live performances, they would’ve probably pushed Moldova out of their top five spot.

Flawless execution for a silly basic song, a crowd-pleaser and what Moldova does best. It shouldn’t be enough to beat some of the best songs of the year even if the execution wasn’t that perfect (Italy and Belgium), nor other very good entries (Hungary, UK, Armenia, Azerbaijan, Norway, the Netherlands, Belarus…). But it was a very friendly underdog that I’m always pleased to revisit,

again Antranig with THE silliest and most entitled comments among the wiwibloggers.

Reflection of a weak ESC year.

This song is not high art. It’s not subtle like Portugal or emotional like Bulgaria. But it’s a ton of fun! The top three of 2017 really showed three sides of Eurovision in the best possible way. Much as I enjoy “Run Away,” this one is a much tighter song and a lot catchier. Plus, the sax solo is worked in a bit more organically as opposed to how it infamously (and memeably) ground “Run Away” to a halt. Choreography was sharper, too, with a consistent gimmick with the wedding motif. Top three might’ve been a bit much, but it’s… Read more »

The rocking brides with their bouquet mics are undeniably epic. But other than that … To me it seemed a tiny bit undeserved that the juries placed them above Artsvik, Joci Papai, Lucie Jones or Blanche. But I do get why the televote loved them. For three minutes, it’s fun.

They are good at what they’re doing, I hope that this is what jury noticed. Independent and self made artists. At least I hope jury noticed they are not just The Voice Of….winners.

Yes, they are good at what they’re doing, but so were the others, yet Artsvik and Joci Papai received less than half of the jury points. And I’m certainly no fan of casting shows, I never watch them, but that doesn’t mean that they can’t produce good musicians once in a while.

Both jury and televoting seemed to be hyper-focussed on Portugal and Bulgaria that year, if I recall correctly. Not much up for grabs for the rest really. Though I will admit I was glad that the juries saved my beloved OG3NE from a dreadful result. My country’s jury even gave them 12 points. But then again, the juries were even nicer to the undeserving Australian act.

Yeah, OG3NE was vocally great, but the song sounded very 90s, so I’m a bit on the fence with it. Although I still had them above the entire actual top 3. What I still don’t get is, why the jury liked JOWST so much. I thought 20th place with the televote was already very generous.

And because you liked the bouquets, what about Moldova 2006. Somebody from the audience actually cached the bouquet. It was so nice and it seemed genuine and not planned.

Can we also acknowledge that Sergei Yalovitsky returned, like, 450 times hotter than 2010?

Although I agree that in 2017 the level of the songs wasn”t as high as some other years, I still cannot believe that Antranig only liked ONE song in the final. For me it’s just ridiculous!

That was a good final, too! The only songs from the final that year I personally outright disliked were Germany and Spain. There were a few I just kind of shrugged off (Greece, Denmark, Poland, Israel was surprisingly underwhelming compared to the semi), but the rest were pretty excellent.

I agree with everything you said!

The official language in Moldova is Romanian, but Sunstroke Project speak Romanian worse than English. Their first language is Russian. Nothing wrong with that, but probably English brought them votes, even though the ESC bubble prefers diversity.

What about all of the other entries in English that placed lower? Your argument falls flat, I’m afraid.

2017 was the year of underdogs and Moldova was no different. Yet while I love Portugal and tolerate Bulgaria, Moldova is more complicated. To put it in 3 words: repetitive, but fun. Like the song is great in the beginning, but when I hear “c’mon, alright” for the tenth time, or the same unchanging sax solo for the hundredth time, I wanna tear my ears out a bit. It’s like they had a concept for the first minute of the song, but then they ran out of ideas and just kept adding the same stuff over and over again. On… Read more »

The only downside of this entry is the English language.

It was basically “Me English nicht verstehen. Let’s speak dance”, courtesy of Ukraine 2007.

I’m sure that it’s a lot of fun… for everyone else. I’m sorry fans, this just isn’t one of my favourites. But well done to them for doing so well.

I was completely oblivious to this entry because of its shall we say tenuous grasp of the English language. Things like that ruin the whole thing for me. Aside from that, they are probably the best act I can think of that Moldova has to offer and I hope they’ll be back with a stronger song, Epic Sax Guy always brings it. You gotta give this third place to them, performance-wise they brought their A-game, which 4th placed Blanche, owner of my favorite 2017 song, wasn’t able or willing to bring. If they came with an even catchier song with… Read more »