He is one of the hottest DJs on the planet and a hit-making machine. But, Dutch producer Martin Garrix has shot down the idea of him representing the Netherlands at Eurovision.

However, he does have some positive words about the contest and proposes a different way in which he could become involved.

In an interview with Dutch website AD.nl, the “Animals” DJ confirms that he has no desire to represent his home country in Rotterdam. “That ain’t gonna work man”, he says.

However, Martin still finds good things to say, comparing the contest to soccer: “I like it, though, it brings a country together — just like soccer.”

But then comes his crushing verdict:

It seems like Martin Garrix has no problem with the contest itself. However, he politely feels that his music doesn’t fit there. This sets him apart from the likes of Switzerland’s Ilira.

Martin Garrix to write a song for Eurovision?

Because the man who has collaborated with stars like Bebe Rexhe and Dua Lipa is not totally opposed to the idea of being involved with Eurovision.

He himself asks the hypothetical question of what would happen if the Dutch delegation comes looking for a dance song. His answer: “Well, maybe they could use a song I co-wrote. If I can help the Netherlands that way, fine.”

DJs at Eurovision — A brief history

Sadly DJs don’t have a great track record at Eurovision. And maybe this is where Martin’s cautious reaction comes from.

Just this year, Finland’s Darude finished last in his semi. A similarly poor result was achieved by Polish DJ Gromee in 2018. DJ Bobo, Deepzone and more have also stayed in the semis.

The only exception was JOWST from Norway in 2017. Along with Aleksander Walmann, he secured a a tenth place finish.

The 23-old musician from Amstelveen has a busy schedule anyway. Within the next month alone, Garix has concerts on four different continents. In April he will headline the Lollapalooza-festival in Brasil.

But it’s worth noting that he has no confirmed performances for the week of Eurovision. If not as the Dutch entry, he could take part in a similar fashion to the late Avicii, who composed the official anthem for the 2013 contest in Malmö.

What do you think? Can you understand his comments? Do you want to see him at Eurovision? Tell us in the comments below. i cant believe that he dragged wiwi omg

He would be the perfect Interval Act!

Btw have you heard a new song from MÉLOVIN – Expectations??…I love love love it…I’m really looking forward to his concert in Prague 😉

ESCFan2009
Reply to  Thunder and lightning it's getting exciting

What Martin actually tried to say was that Eurovision is more about vocal talent than club music, so he does not see himself as a good fit to produce a song for ESC. While many EDM songs have won ESC, the singers have all had amazing voices (Loreen, Netta) which isnt so when talking about typical radio friendly pop/edm. Madonna was deemed the worst artist to ever perform on ESC and she is an icon. That should tell you something about how it’s more to do with the vocal talents and overall experience of the performance, than about how many… Read more »

I went everywhere for you
I even did my hair for you
I bought new underwear, they’re blue
And I wore ’em just the other day

Lena was not about the voice, it’s a SONG contest.

Hi wiwibloggs. Please don’t twist the words of people like Martin Garrix next time. I am worried that this might cost you all from making more articles about Eurovision in general given that the likes of him are well-known everywhere and may make further actions that we don’t know yet. Continue supporting any artists you meet without bringing them down because we don’t want any more unnecessary hate getting out of control among artists, fans and journalists like you. Plus, it would be great to see Martin Garrix in Eurovision whether he’s competing or not and I don’t want him… Read more »

This is such a joke! His work is so unintersting, basic, even old-fashioned and this guy says something like this???? I think he could learn one thing or two with Eurovision. Good thing he will not participate! Thank God for that.

Thank you for this massive downvoting. It shows how tasteless many Eurovision fans are these days.

It also shows how disrespectful you are to people who don’t share your opinion.

In my first comment I was just expressing my opinion and not making any comments on other people’s opinion. On the contrary I was showing respect and appreciation of all the artists that participated in Eurovision. But apparently if you don’t have the musical taste of the majority and express it you are massively downvoted. I call this fascism.

Don’t DJs and producers ever work with vocalists then?

Dutch people are so brutally honest.

Are you going to address the fact that Martin replied to your article tweet and literally called you out on taking his words out of context?? 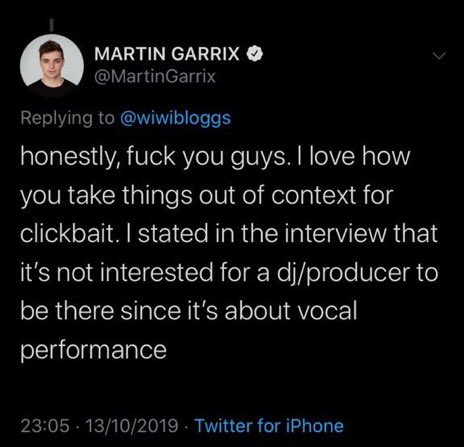 I knew it had to be something like that that he actually said.

wiwibloggs “journalism” at its best! (be aware that post is going to be deleted in no time)

I LOVE THIS GUY! My sentiments exactly. <3 Guys like him who speak out and are not taking any abuse are most needed in the world of Eurovision. The interview where a participant says this face-to-face for the first time feels right around the corner. It's about time.

This reflects so poorly on Wiwibloggs they need to apologise. At least the writer does.

I clicked into the original source that they’ve linked to in the story and they’ve given exactly the same quote. So I don’t see how wiwibloggs have misquoted anyone. Also, it’s kinda telling that Martin deleted the tweet. My guess is he saw the fools melting down on twitter and reacted without reading first and then realised his error. pffft

The headline Wiwi choose for this article is definitely out of context. Of course we don’t know what words he used in the interview with AD, but at least AD didn’t use a click bait headline.

Happy to get an answer to a question I’ve been wondering for almost 5 months. His answer was very predictable but I’d love to see him as an interval act during the final, for example.

When I put the radio on in the morning, musically, it’s not interesting.
As a percentage of total acts, I’m always surprised with just how many ESC entries are actually interesting compared to mainstream, popular music.

DJs don’t belong at the contest, due to the backing track. There’s literally nothing for them to do. Darude could have stayed at home, he had already done his bit months previously…so I understand why Martin suggests he could only contribute as a songwriter.

He didn’t mean that ESC is musically not interesting in general, but for him and his career. That’s fair enough. He does not bash Eurovision as some do *coughsalvadorcough*, but makes his point.

Oftentimes, criticism on the contest is actually quite on point. Between rehearsals and interviews, and the pressures and expectations people from the bubble placed upon the artists (sadly moreso on the junior edition), one needs to take a breather.

unfair judgement. eurovision songs are interesting musically speaking. i wouldnt want him near the 2020 preparations, he can stay out of it…

Did anybody asked him to host!?! I’ve been wanting him to host the competition since Duncan won!!

He is right about the majority of entries not being interesting musically, but isn’t that all the more reason to give your best and outclass the rest? This sounds more like ‘I guess I could throw them a bone and give them one of my sloppy seconds if they ask me’. I still think Eurovision is a great platform to showcase your best work. Unfortunately, most great ones don’t want it because they don’t need it, which mostly leaves those who need it participating.

Eurovision should be safe place for any artist. Experienced and popular artists and unknown artists.
Eurovision is musically interesting, in my opinion, because of the diversity of the countries and songs.

I have to politely disagree. There have been musically interesting songs throughout the history of the contest. Even in the modern age. Soldi, 1944, Telemoveis. Even in the national finals songs like Esamiba are very interesting. One thing I can say is that we do have a problem with countries sending outdated songs. This year so far can be different. I like the sound that the contestants so far have.

Well DJ music is only kinda outdated for me given that it had its boom during the 90s and 00s. Also a DJ saying that Eurovision is not interesting musically is a bit ironic, given the fact that his music is worse than Eurovision music. Anyway… Djs never really were made for Eurovision, although I liked Darude from last year!

I think Darude wasn’t good at all. A better example would be JOWST, imo.

Actually I liked both

The contest indeed lacks something daring, musically speaking. It has too many safe songs, sometimes so safe that they don’t even chart in the countries they come from. And the current jury system supports this trend. It’s weird that we get so many different countries and cultures but we end up with most songs sounding like a entry we heard a zillion of times before.

That’s not always the case. Each year we do have daring and original acts, they just rarely place well, given the fact that the jury only supports radio-friendly plastic trash pop songs. In the end most people only remember these, and not the ones that really were creative!

I know, that’s why I said “most “. There are great creative songs with artistic merits, which sometimes do well, sometimes flop.

That performance is epic indeed, aaaaaaand it was held in Ahoy Rotterdam. So if the Ahoy management is capable of doing something like that next year, it will become an epic unforgettable edition 😀

i’d say musically it’s mostly outdated – this year i only felt like very few songs, among the pop ones, were from 2019. so that’s why ppl like martin would be welcome, we need more songs aligned with the current public’s request. if u make traditional music from your country that’s another thing and i always appreciate it, of course–but if u wanna do radio-friendly pop, u need to make it fresh n current

He must have seen Darude’s performance. Anyway, he can also help do some songs for the contest just like what Avicii did in 2013.

I expect involvement by DJ’s anyhow. If only we had artists like Mariza and Ana Moura and the traditional music they stand for in the Netherlands.

they sent sieneke in 2010 which is the closest thing to ‘traditional music’ for them, i think they call it pirate muziek or sumthin

Yes, piratenmuziek. It is called like that because it was mainly heard on illegal amateur radio stations. The 1981 entry is also an excellent example of this genre.

he behaves much better than Ilira, and he is actually a big name unlike her..