Last Saturday, we learned that Lady Gaga was approached to perform at Italy’s Sanremo Festival, which will take place in February. However, sources say the American pop star has turned down the offer. While nothing is official, hopes of seeing Gaga perform in Teatro Ariston have definitely diminished. But there’s no need to worry, because the 70th edition of the festival will certainly be star-studded nevertheless.

According to a report from trendit.it, Lady Gaga is no longer an option. But the report also says that Amadeus, the producer of Sanremo, has his eyes set on two Hollywood stars. A bevy of guest stars have already graced the Sanremo stage, and the Italian producer hopes either Meryl Streep or Bradley Cooper join the list. The latter has previously sung with Lady Gaga and, like Gaga, he is also of Italian descent.

Because nothing has been confirmed yet, there’s plenty of room for speculation. Since the 2020 festival will mark the 70th edition of the song contest, the producers want to make it extra special. Amadeus will produce the show, as RAI announced this summer, and he’s known to be a “little monster”.

Lady Gaga, as Il Mesaggiero reported, has some free time in winter 2020. If Amadeus did in fact approach her about performing as a guest act, he’d likely be aware of that. But it’s not easy to bring a star of her level to perform. A similar thing was said about Madonna in the run-up to Eurovision 2019 in Tel Aviv. Talking about Madonna, Sanremo producer Amadeus said: “Who would I like as a guest between Gaga and Madonna? I vote for Lady Gaga. Lady Gaga is a fantastic actress, beautiful singer, extraordinary musician. And Madonna? For God’s sake.”

It is important to note that Madonna already performed in Sanremo once. Amadeus ruled her out for a possible return to the festival, and sees her earlier Sanremo appearance as a failure. But this year, Amadeus hopes, the guest act in the Italian national selection will leave a much better impression.

Who would you like to see as the guest act? Could it still be Gaga? Tell us in the comments below! No thanks! Lithuanian media checks in with artists who WON’T be doing 2020 national final 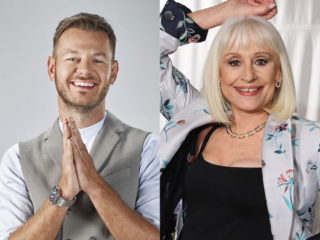 WHY-WHY-AY-AY-AY have Lady Gaga when you could have the WHY-AY-AY lady?

I don’t get this sudden infatuation for American artists in Eurovision.

Why would they want them to perform at Sanremo anyway?
Bring Italian talents and legends

Off topic: Does anyone know when the songs for FiK 58 will be released? I can’t wait for Elvana’s and Arilena’s songs!

This is what you deserve for adoring and worshipping somebody like you did Lady Gaga in a recent post of yours. She is a manufactured, plastic crap, she has always been. Grow up, Polegend!

Gorgeous woman indeed, but the real reason I’m mad is because I’m jealous of her orange skin. For the Oscars she went to Trump’s beautician.

Lady Gaga is not for that cheap festivals she is a BIG STAR!

let’s not, she’s been chained to veGaGas for the past year

Bring her to Eurovision instead. Someone please make it happen!

Stars of her level would never get in a competition where they’d risk to lose to Mr/Mrs Nobody. It’s a matter of reputation. And no, don’t mention Céline Dion as she won Eurovision when she was still at the beginning of her career.

Meryl Streep was asked to sing just ONE LINE during opening of the Academy Awards when Hugh Jackman was hosting. She found it too stressful and passed. I can’t see her doing San Remo, of all things.

Che peccato! Her lost, I’m so interested to know their line-up the 6th of January. Apparently next year we’ll have the first songs during the first night and the remaining songs on the second night. In bocca al lupo. :3

Does anyone know when the line-up for Sanremo is going to be up? I think it was around December the last time. Or maybe it was a couple years ago what I have in my head.

It will be announced on January 6th, during a program aired on Rai1 since 9 pm