She topped an incredible field of incredible songs to win the Eurovision 2019 jury vote. But for Tamara Todevska the summer was anything but smooth sailing.

Over the summer the “Proud” singer performed her country’s national anthem at the American Embassy in Skopje, but accidentally left out part of the official version of the anthem. The omitted section referenced Macedonian revolutionaries Goce Delcev, Pitu Guli, Dame Gruev and Jane Sandanski. The omission became a national controversy. Tamara has repeatedly apologised for the “unintentional mistake”.

On Thursday evening, ahead of her performance at the prestigious Kenga Magjike song festival in Tirana, Tamara caught up with us in her hotel room to discuss the scandal, her Eurovision jury win and more.

Tamara Todevska and the national anthem

Tamara says she was nervous about the performance and, about twenty minutes before her spot, her father begged her to review the lyrics. Amid the stress of getting ready she forgot the country has had more than one anthem over the years.

“I checked it on Safari and I actually checked the wrong one,” she says. “I was checking the old anthem.”

“I messed up the lyrics and the hate starts. They hated me so much. That period when I was supposed to be happy of everything that happened, be proud of myself…I was locked in four walls and I was like WTF happened.”

Kenga Magjike — that’s Magic Song — is perhaps the most prestigious of all Albanian song festivals. Past winners include Eurovision alums Juliana Pasha, Aurela Gaçe and Jonida Maliqi. The festival brings together top international talent and established and up-an-coming artists from the host country. Just search Kenga Magjike, and you’ll find endless videos with view counts in excess of 1 million. This is a national event that’s been running for more than two decades. Feel the passion!

In the competition Tamara is singing “Monsters” — an incredible follow-up to “Proud” that shows her ability to appeal to listeners at home and abroad.

“Monsters” escapes the clichés and platitudes of so many songs about love. Rather than taking us on a journey through euphoria, Tamara takes us somewhere darker and therefore more real. Her babe has left her and it’s cutting deep. He’s left her with the titular demons she sings about.

What do you think of Tamara’s “Monsters”? Are you excited to hear her at Kenga Magjike? Let us know in the comments box down below! Festivali i Këngës 58: Songs to be released on 9 December, Mahmood confirmed as interval act 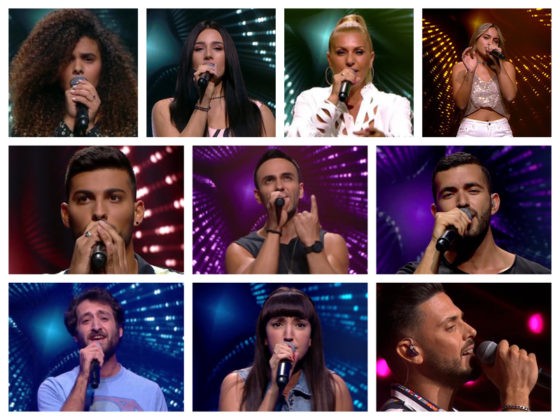 Israel: Judah Gavra and Oneg Israel grace the stage in Episodes 7 and 8 of the Next Star for Eurovision 2020 What was the anthem incident in the first place? XD

Mistakes happen but unfortunately in a country that is full of nationalists that think that are related with alexander the great who was ages ago in the area and spoke Greek, you cant do much. You just wait for the storm to pass

nationalists are so weak and vulnerable. imagine gettin mad over a national anthem. ppl are dyin kim

Imagine being so biased that you think that caring about your nation identity makes you nationalist. Maybe we should get rid of flags on esc because it’s too nationalistic. Or maybe instead of countries’ names, make them perform as country1, country2, etc. I don’t know whether its more sad or dumb. “TheY ARe so WeAk aND VUlneRablE” but say anything bad about LGBT for example and comment section is on fire. Prime example of hipocrisy here. Its just sad and what’s even more sad is that there are people who agree with you

That honestly sounds like a really awesome idea. Then people from for example Azerbaijan might vote for Armenia and not realise it, proving that national prejudices are extremely stupid in the first place and have no place in society!

Sad the type of person you are. No one is born a nationalist, so don’t compare prejudice against marginalised groups who have no choice in what they were born as to nationalist idiots who deserve the criticism they get.

Could happen to anyone. Forgetting a couple of lines, I mean. Or do you all know your country’s anthem by heart? I certainly don’t…

Polegend said that people who were mad that she doesn’t know her own anthem are nationalists. She literally checked lyrics last minute. If you’re asked for something like that, you should at least try to not screw it up. How can you compare it to Armenia Azerbaijan situation? Its not even close.

Sure, because people voting on PIS are same who posting on wiwibloggs… You’re not the brightest person in the family I bet. Do you really think there are only hardcore libera?a and nationalists in the world? Try talking with people outside of your bubble. Maybe that’s a problem. I’m kind of person who realise that even though I don’t really understand something, like deep connection to your country (not nationalism) or for example being transgender, I can accept and respect that people are feeling something is deeply important to them. That’s why if I somehow disrespected someone like that, then… Read more »

EVERYONE would get hate for changing national anthem. Everyone. Who was it in USA recently… Fergie I believe. She said “sorry, it shouldn’t happen” and it’s done. Don’t play victim card please.

Listening to that clip, her song Monsters sounds fantastic as do her vocals, hope she does well

So I guess Christina Aguilera, Fergie and Michael Bolton remain the only ones to screw live National anthems performances due to their own stupidity, lack of preparation and the absurd idea that you can poke fun at something of this magnitude.

National anthems are complicated. Some are either too dang long, or have complicated lyrics, with some being sung multilingually. Only a good few that are short and concise exist in this world.

I think the Slovenian (mine) is really good, it’s actually not about Slovenia only, but also about friendship and all nations.
God’s blessing on all nations
Who long and work for that bright day
When o’er earth’s habitations
No war, no strife shall hold its sway
Who long to see
That all men free
No more shall foes, but neighbours be!

Oh yes, the lyrics are very nice. Portugal’s national anthem is also really nice. I heard it for the first time the other day at the FIFA Beach Soccer World Cup, and also checked what the lyrics meant in English, and was like “wow, now that’s a great anthem”. My country (South Africa) also has a nice anthem. Our anthem contains five different languages (of our eleven official languages). The English lyrics are as follows: [First language: Xhosa] Lord bless Africa May her glory be lifted high. [Second language: Zulu] Hear our prayers Lord bless us, your children. [Third language:… Read more »

One of the most beautiful anthems for sure.

Actually Portugal’s lyrics are not that great (I’m portuguese) They speak about rising the glory of Portugal, about heroes and honouring our ancestors.
Starts off as : “heroes of the sea, noble people, valiant nation, imortal one.”
No need for more I believe. I mean, they are out of sense with todays sense of nation.
Just to add that this anthem dates back to 1910, it ends with: “Against the cannons, march, march!” So, it could really use a revision.

I totally get what you are saying, in that the theme/lyrics are a bit dated for modern times, but I really love the battle cry, patriotic, and somewhat intimidating aspect of it. It works really well in sporting events, as it is like the haka of national anthems, especially since the Portuguese are so passionate when they chant it. I love the “As armas! As armas!” part the best… It’s very anthemic, which is good for a national anthem 🙂

I agree that the sound (rhythm and intensity) of it works well for its purpose, I was just addressing the content part.

And that’s something it would never happen to a Spanish singer…mainly because our anthem have no lyrics. No lyrics, no fuss.

Maybe except that time in the Davis Cup the Australians put the republican anthem instead of the monarchical one.