In 2017 he represented Italy at Eurovision with the song “Occidentali’s Karma”. Now Italian singer and songwriter Francesco Gabbani is set to make a return to the national final in his home country.

Italian media reports that Francesco will compete in Sanremo 2020, along with many other esteemed stars who will celebrate the first 70 years of the Italian kermesse.

Since the list of 2020’s rumored acts is as long as the life of the contest, we will present the latest speculation over the week with a series of different articles.

Italian websites All Music Italia and Recensiamo Musica have been talking to their well-connected sources and have come up with several names said to be on the preliminary list fo Sanremo 2020.

There’s another beloved Eurovision artist who might appear in the Sanremese line-up, but not as a performer. It’s Mahmood, who is rumoured to have written a track for the X Factor 6 winner Chiara Galiazzo, who has already sung at Sanremo three times. Her latest single “L’ultima canzone del mondo” was also written by Mahmood.

Giordana Angi is an artist who has made herself known in recent months. Runner-up in the latest edition of Italian talent show Amici di Maria De Filippi, the singer-songwriter is looking for confirmation of her status after the good results of her last single “Stringimi più forte“.

Many say she might be paired with Amici‘s winner Alberto Urso. The two are best friends and have already worked together.

Two other female singers who dream of returning to the Ariston Theatre are Giusy Ferreri — who is now known as the Queen of Italian summer earworms — and Federica Carta.

The male section would be enriched by the presence of Matteo Bocelli. The 22-year-old son of the world-famous tenor Andrea would attempt to launch his solo career in the same place where his father started his own career in 1994. They recently duetted on “Fall on me“.

Amadeus, presenter and artistic director of the Festival, is said to want rapper and singer Fred De Palma in the show. He topped this year’s Italian FIMI Singles Chart for eight weeks with his multiplatinum hit “Una volta ancora”. He could share his debut at Sanremo with Spanish singer Ana Mena.

Another rumored name coming from the rap-trap scene, now cleared through customs, is Achille Lauro. The singer would return to the Festival one year after his successful first participation with “Rolls Royce“, to present a new project inspired by the music of the 90’s.

A common feature in Sanremo is the presence of duets created specifically for the festival. We should see several of those in 2020.

Among the candidates there is the band Dear Jack — who took part twice in Sanremo with two different singers, Alessio Bernabei in 2015 and Leiner Riflessi in 2016 — who would show up at the Ariston Theatre paired with American disco-soul singer Amii Stewart.

A collaboration with vintage flavor could come from former Matia Bazar’s singer Silvia Mezzanotte and music legend Dionne Warwick. Both have many participations in Sanremo behind them, and have long been looking for a return to the event.

Many artists already seen in Sanremo in the past are reportedly seeking a comeback: Max Gazzè, Samuele Bersani, Nek, Francesco Renga and The Kolors.

Finally, there is a new name, that of Riccardo “Riki” Marcuzzo. Runner-up in the sixteenth edition of Amici, he is desperately looking for a way to promote his upcoming second studio album in a proper way, after the unexpected flop of his latest single “Gossip“.

Stay tuned for other rumored names coming in the next days! Who would you like to see on the Sanremo 2020 lineup? Tell us your thoughts below! Aly Ryan: “Eurovision fans are the most loyal and amazing people ever” 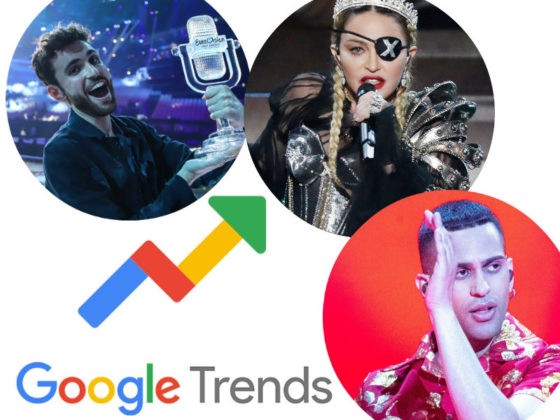 A Year in Search 2019: Eurovision and its stars dominate Google Trends

Giusy Ferreri omg..just loooove all her songs and her incredible voice !!!

The last time she was there she was awful live though. Did not even make it to the final cut (even though the song was really good).

New knowledge for me: Dionne Warwick did Sanremo.

fred de palma ? lmaooo not that talentless slug, please. if they want someone fresh n young they can call one of the few non-annoying trappers who are actually interesting like ghali.

Whats wrong with fred lmao, una volta ancora is one of the bangers of the summer.

Give me Giusy, Nek and Annalisa and I’m happy! Loredana would be amazing too but I know she won’t be back this year. Can’t wait to watch Sanremo 🙂

I just want to see Giusy Ferreri win Sanremo. Don’t care if she goes to Eurovision.

Yesterday I saw a store in my town that it was called “namasté”. When I read it, I said “alle!”. XD It was a premonition (?).

thats nice but why do read the articles your not intrested in? I never do so i dont get your point 🙂

she did a trashy dance pop album in 2012 n a retro cover album too. her last hit was gente come noi in 1995, she’s more of a legend that we left in the 20th century

I want the Kolors, Annalisa and Irama back 😀

Aly Ryan would love to represent Italy. The pizza she ate yesterday had Italian roots.

it ain’t pizza if she ate it outside of italy ! sorry i don’t make the rules

unfortunately it was an isolated case in her otherwise unremarkable discography

Finally some rumours about Sanremo line-up, I’ve been waiting for them.