The entries for Söngvakeppnin 2020 have leaked on Spotify, ahead of RUV’s official reveal tonight.

You can see the list of this year’s Söngvakeppnin 2020 entries below. They’ll be officially presented tonight by Iceland’s national broadcaster.

Like in the past years the songs will be performed in Icelandic in the semifinals but the performers have the choice of switching over to whatever language if they make it to the final. By the looks of it only six songs have English versions, the four remaining only have an Icelandic version. You can see the English title in the brackets behind the Icelandic title.

This might be an influence from Hatari, as they made it into the top 10 at Eurovision 2019 with their song sung entirely in Icelandic, for only a second time since the new language rules were applied back in 1999.

At first glance we can see some familiar names. Daði Freyr ended up in second place in 2017 when Svala’s “Paper” swept the Icelandic nation and represented the country in Kiev. Matti Matt was a member of Sjonni’s Friends that represented Iceland in 2011. Elísabet competed in Söngvakeppnin 2016 with “Á ný” which was written by Greta Salóme, who ended up winning the whole thing with her own song “Hear Them Calling”.

Iceland returned to the Grand Final last year after an extended stint in the wilderness. Hatari eventually placed tenth in Tel Aviv.

Who are you most excited for? Tell us in the comments below. 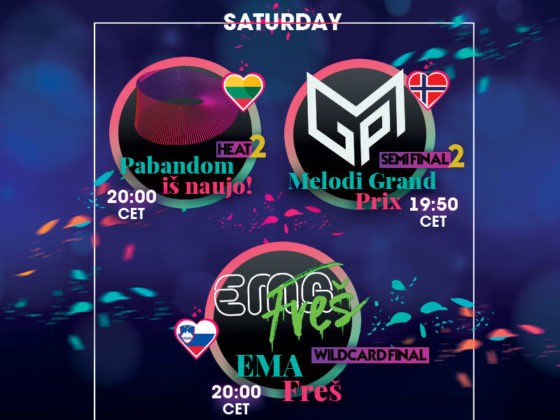 These are never really leaks. The songs are set to release on the 19th of January. When it hits midnight on the 19th in New Zealand, the songs release here and the files get moved around the world. It’s always odd listening to the entries, commenting on them and having people assume that they’ve been leaked or something. That said it’s a good time listening to stuff a couple of hours in advance 🙂

Oculis Videre is the best

In. My opin ion icelandish and german lan guages are the same. Augun means eyes in ic elandiah and augen in german.

Really enjoying Think About Things – can imagine this doing well.

…Kind of got a feeling that this will be another year that Iceland does not qualify, ….but it’ll be just close enough that tons of people are going to complain that Iceland was robbed.

Da?i or Iva in my opinion, the guy took 2nd spot in 2017 and his songs are always funny, but I’m afraid iva’s song will be overrated not for the song itself but for her disease

Pretty rude thing to say, I didn’t know Iva was blind when I first heard the song and it was by far my favourite, its a standout, has something special, and Iva being blind has nothing to do with it.

Can anyone still play this? Seems to have been disabled. See the songs, can’t play them.

Rosa, That’s weird because i live in The Netherlands and i can listen to all the songs!!??

It’s available now. Seems they blocked it from Iceland until the show aired. ?

Iva has to win this. I’ve never liked an operatic ESC entry but with a good performance this could win Eurovision.

They should really fix their position on “risky choices” since it paid last year, so “Oculis Videre” for the win. It sounds so much like Enigma, love it !

Done. “Oculis Videre” is going to win. Any other outcome would be nonsense.

Lets hope for a good staging! The Song is amazing

Iva (the singer) is blind and with great staging and hopefully it’s intimate but epic. I feel that televoters and juries will be moved as the song is about seeing

From hearing the snippets, I can already tell that the only one with real potential might be ‘Oculis Videre’. I feel like it will be a ‘Hatrid mun siga’ case in the sense that there is only one clear, outstanding choice. Of course, at Eurovision, you only need the one choice, but Iceland used to have choiceS. Still, better than last year, overall. This year, there’s nothing as supremely boring as ‘Moving on’, for example.

Where have you heard those snippets?

Granted, very short, but enough to go on. I can already dismiss most from that. I need to hear “Oculis Videre” in full length to know if it keeps its promise. “Haunting”and “Dreyma” might be okay.

Thank you! Totally agree with you…

Hi I have heard the full version of Oculis Videre. It starts slow and her voice really echoes and it gradually builds to the chorus as you have heard in the snippet. Though it just repeats but the last chorus is more epic and the instruments get louder. I think it was the English version on the video but the Icelandic version is better

well they say don’t judge a book by its cover, but as soon as i saw that title i knew it wouldn’t disappoint, and it really didn’t. hope iceland picks oculis.

*squeals* So good, so good

> not available in your country
REEEEEEEEEE

After listening to these songs, I don’t think any of these songs will place higher than Hatari. Daði and Iva are the mostly likely to qualify for the final imo. The rest…no!

If Iceland choose “Oculis videre”, that’s another huge contrast from their previous entry.

Our Choice to Hatrið Mun Sigra to Oculis videre

Iceland truly is bipolar with their choices!

So freaking excited about SK 2020! Always had a soft spot for Iceland’s national selection, even though it doesn’t register much with most eurofan’s tastes. Here’s what I’ve discovered about this year’s contestants: Brynja Mary Sverrisdóttir is 16 years old and lives in Denmark. His older sister Sara Victoria has competed in the Danish version of The Voice Junior. They both are promising actors and have taken part in an international event called The Celebrity Experience Awards. Daði Freyr Pétursson you all know, he competed in 2017 ending runner-up to Svala and came back as interval act in the 2018… Read more »

I really like Daði Freyr – Think About Things
Catchy af!

HAS to be Daði! He was amazing in 2017, if he’s got anything similar then it has to be him!

After listening to these songs, I don’t think Iceland are going to beat their placing last year with Hatari!

I’m most excited about Kid Isak who won last year High School singing competition and made a new version of I am what I am for Reykjavík Pride also 2019. Quite a shy guy with huge personality and such a charming stage presence.

Augun Bin or Gagnamagnid, tbh, should win, or Ævintyri. But these just add on to so-far mediocre songs for this national final season. Kind of a let down after Hatari.

Send Oculis Videre or Dadi. The others are meh.
Oculis Videre in Icelandic sounds sooo mysterious and it’s like traveling in Iceland at midnight. Great potential with staging and hopefully the live performance will live up to it.

Oh, totally forgot: Yes to singing in Icelandic at Eurovision. I wish they’d do that every year.

Does anyone know what time they’ll be online? Can’t access anything. Don’t wanna use Spotify anyway. I remember ‘Á ný’ quite fondly. As well as ‘Aldrei sleppir mer’. Greta’s number two songs were always good. The number one songs, too, of course.

I know. My country doesn’t even have an access to Spotify. I hope to see them on YT soon. I still have many Icelandic NF entries on my playlist and their last winner was outstanding. With the help of Netflix budget, this might be the one to watch. I’ll just have to see who to rate and rank first – Iceland or Czechia.

I don’t even want access to Spotify. But if they’re ‘leaking’ on there anyway, they might as well put them on YouTube or launch their pretty website with the pictures simultaneously. I’m a visual learner.

A country with no access to Spotify? Where do u live Zootopia?

Russia and much of former Soviet doesn’t have access.

You know, it’s never meant to be considered a ‘leak’ anyways! *wink