Sandro was due to represent Cyprus at Eurovision 2020 with his song “Running”.

Scroll down for “Running” lyrics

For the fifth consecutive year, Cyprus has opted for an internal selection. The tactic has proven successful, resulting in five qualifications and one second-place finish in 2018. However, after two years of loud female-led pop bangers, the island opted for a more thoughtful number in 2020.

Sandro — born Alessandro H. Ruetten — is a German singer with Greek and American roots. After appearances on The Voice of Germany and New Wave, the rising star was approached to participate by the Cypriot delegation.

Sandro wrote a number of songs with various songwriters. A shortlist was drawn up, with “Running” eventually rising to the top.

What do the “Running” lyrics mean?

In conversation with our Tobias at the Melfest WKND 2020 preview event in Stockholm, Sandro explains the meaning behind “Running”.

This is part of my life, part of who I am. It’s kinda brave to do that, as there are so many people that feel they are weak when they talk about it. But it’s not a weakness.

You’re strong when you talk about it. I just want to get that message across that there is light at the end of the tunnel. That there is always something you can pull yourself out with”.

On the official Eurovision website, Sandro elaborates further. His philosophy is that music must be authentic, truthful and reach peoples’ hearts — “It tells a dark story that highlights the struggle against adversities and the storms that we have to weather in life”.

Aside from Sandro himself, the songwriting team includes two other Eurovision performers. Alfie Arcuri took part in Australia’s Eurovision 2019 national selection. Teo DK was one half of Freaky Fortune, who represented Greece at Eurovision 2014 with “Rise Up”.

I don’t feel like talking, let me sit here alone.
The phone’s ca-alling, I can’t pick it up

Drowning out my memories, from the night before
Door’s kno-o-cking, just leave me alone

Looking – losing
My energy – tripping
Anybody tow me back home

What do you thing of the “Running” lyrics? Can you relate? Let us know in the comments. 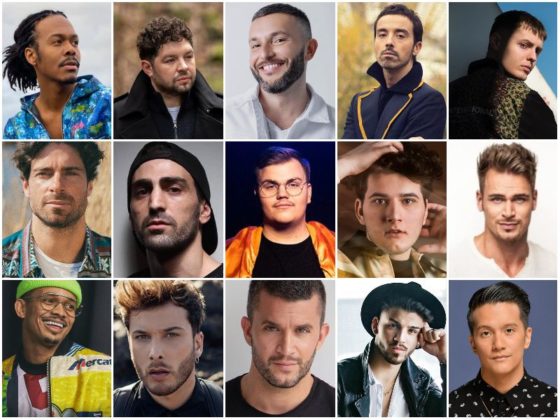 Poll: Who is your favourite male solo singer of Eurovision 2020? Look sandro or alexander is a nice guy and I wish him well in life and his career. But to be blunt I think he was an awful choice for an internal selection,and would probably not have qualified for the grand final,or lingered near the bottom of the scoreboard. There are much better male singers in the local cyprus and greece music industry,who could literally do the same job if not better. You just expect so much better from an internal selection. I dont mean to be nasty,but I sincerely hope Cybc do not ask him to return next year,it… Read more »

A hair model posing as a singer

What anxieties and depression does Sandro have? Bad hair day?

Maybe he had anxiety and depression because of people like you

What a crass and insensitive comment. As someone who has struggled with mental health distress and who now works to support people in a similar situation, let me tell you that living with anxiety and depression is way more than just having a “bad hair day” as you so eloquently put it. I just hope it never happens to you. You ought to be thoroughly ashamed of yourself.

Does anybody else think, “anybody tow me back home” is a really strange line? I am not sure if it is a typo or that none of the songwriters are native English speakers but “take” would have been a much better verb to use. “Tow” is something normally reserved for heavy inanimate objects, and I’m not sure Sandro really means to say that?

But props to him for reflecting this subject in his lyrics. They may be quite simple but I agree with him, they do seem quite authentic to someone suffering from anxiety or depression.

You typically tow things that are broken down, such as cars or ships. And you tow them because they’re so heavy.

In the lyrics, Sandro is weighed down by his anxieties and is relying on someone to pull him out of the mental mess. Because he’s too broken to do it himself.

That’s how I’d interpret it anyhow

Fair point. I just think “drag” or “pull” or “carry” or something like that would have made for a better mental picture. “Tow” is a very functional verb and it also implies being physically attached and moving very slowly, so I get all sorts of incorrect images around what Sandro wants me to practically do to help him.

Such an underrated bop!