After its surprise success last year, MRT opted for another internal selection in 2020. After providing backing vocals for Tamara Todevska in 2019, Vasil Garvanliev was due to represent North Macedonia at Eurovision 2020 with his song “You”.

Scroll down for “You” lyrics

Despite Vasil’s experience in opera, “You” is a sensual upbeat dance song about feeling the music. Vasil himself said, “‘You’, is an invitation for everyone to connect, open up, dance, and celebrate the moment. We’ve all been there. The moment when that unexplainable thing happens and sensations take over you. The choice is yours: let go, put your dancing shoes on, celebrate, and just dance.”

North Macedonia in Eurovision 2020: Vasil “You”

Vasil was born in Strumica, the largest city in eastern North Macedonia. He began his career at the age of seven, performing at North Macedonia’s most popular children’s festivals. His family then moved to America, where he continued his music career. He was a soloist in the Chicago Children’s Choir and then eventually moved into opera, partaking in over 50 roles.

Truly a multi-talented singer, he mixes in pop music as well as opera in his repertoire. He provided backing vocals for Chance the Rapper and released a few successful solo singles after returning to North Macedonia in 2018. His first solo concert in Strumica took place in November 2019. The sell-out show showcased his ability to perform in multiple genres.

Vasil is no stranger to Eurovision, providing backing vocals for Tamara Todevska in Tel Aviv last year. “Proud” was a surprise hit, bringing North Macedonia to the top ten for the first time. Vasil had also been hotly tipped to represent his home country at Eurovision, even appearing in our wishlist, and hoped to perhaps even beat Tamara’s result.

What do the “You” lyrics mean?

“You” is simply about the art of letting music consume you and drawing you to someone you just met — “This feeling I can’t understand / your arms into me / pulling me closer / and closer with sweet melodies”.

The lyrics create an image of being attracted to a stranger on the dance floor and being intoxicated by the music. Truly a sensual moment! And something that the music video illustrates brilliantly.

Things heat up as the song goes on, becoming even more physical. “My lips find yours / and just like a muse you’re taking over me / I like it / I want more”. The dancing gets more and more intense, implying that the attraction only gets stronger.

The lyrics convey the opportunism of the moment and the fact that the dancers may never meet each other again. “We may only have tonight / hold me tight and let’s ignite”. So, to make the most of it: “Tonight I only wanna dance with you!”

“You” illustrates the mutual attraction of the two dancers. The lyrics flip between “Tonight I wanna” and “You know you wanna”. Dancing is truly an experience for two people, and this song demonstrates that connection. Music truly can take us over.

The song was written by an all-female team. Nevena Neskoska, born in Ohrid but also raised in Chicago, wrote the song with her sister Kalina and co-student from Berklee College of Music Alice Schroeder. Darko Dimitrov and Lazar Cvetkoski, who partook in the writing of Tamara Todevska’s “Proud”, also contributed to the production. Darko is a stalwart of Eurovision. He also helped write Albania’s 2020 entry “Fall from the Sky”.

Nevena Neskoska stated of the song, “[It] was created around strong ethnic chants that feel like home to me. We used bass, plucks, tarabuka and chords to enhance that ethnic vibe throughout the song. YOU is about the human connection we have to music and the art of letting go through dance… It’s like a complete takeover of your senses. After compiling together the first demo, I knew there was something magical about it that only Vasil’s powerful voice could portray. Vasil’s interpretation and artistic touch brought YOU to another level, and I know audiences throughout the world will feel the story he is telling.”

Sing it to me, sing it to me, oh
We might only have tonight
Hold me tight and let’s ignite
And for the moment, I

Sing it to me, sing it to me, oh
We might only have tonight
Hold me tight and let’s ignite
And for the moment, I

Does “You” make you want to dance? Will you miss it? Do you hope that Vasil will go to Eurovision next year? Let us know below!

Building bridges: Blas Cantó teams up with Kelly Clarkson on the Spanish version of her new single “I Dare You” 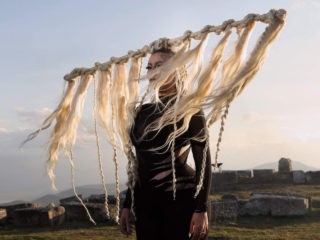