After a one-month break, #EurovisionAgain returned on Saturday evening for its August run. This time Eurovision 1985 was the retro song contest of choice.

Scroll down to watch Eurovision 1985

As always, there was a new fan vote, although the winner stayed the same — Norway’s Bobbysocks! with “La det swinge”.

Listed below are the results for #EurovisionAgain 1985. The rankings are based on the votes of all those who decided to vote for their favourites while rewatching the Eurovision 1985 grand final on Saturday 15 August.

In brackets, we’ve included the differences between the new fan vote and the original result from 35 years ago.

* Spain and the United Kingdom finished joint sixth in the #EurovisionAgain 1985 vote.

Votes have been checked and verified.

Thank you @svt and @Mentimeter ?

Here are the scores from the GOTHERBURG 1985 Twitter jury ??

#EurovisionAgain may be over for now, but the Eurovision 1985 grand final remains online… for now You can watch the full show on the official Eurovision YouTube channel.

But why? Before 2004, the copyright for each show belonged to the respective broadcasters. In the case of 1985, that’s Sweden’s SVT. For now, the Swedish network has opted to make the show available only temporarily.

#EurovisionAgain is scheduled to return on Saturday 19 September at 21:00 CEST.

What do you think? Did Bobbysocks! deserve to win the rewatch? Let us know in the comments. 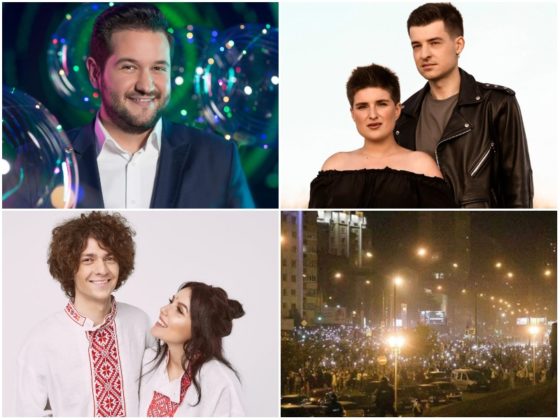 Explainer: What is happening in Belarus? And how are Eurovision personalities reacting? Thank you for the third-last place for this horrible and childish song from Denmark.

But wonderful Portugal is also underrated in this list….

Sorry but for me it should have been The UK or Italy. Norway is kinda meh, and why Turkey wins 10 places, is a very big mistery for me. As for my two native countries. Sweden, same old, same old, whow did this ever became third? And Belgium, just speechless… What were they thinking sending this piece of…well you all know what

Spain getting what it deserved. La Fiesta Terminó is a brilliant song and Paloma San Basilio a really talented singer

I’m largely unfamiliar with this year (and I expect many fans are), but I think it’s great that Eurovision Again has chosen something from a long time ago rather than something recent (last five years or so). I have only watched clips so far (I’ll make the time to watch the whole thing), but it still looks like a pretty good production (for it’s time), and I enjoy the host. She is calm and laid back, with a keen sense of humour. Before the UK entry, is she referencing that Prince Charles quote? Also, is this on of the first… Read more »

First time sport arena used for ESC was in 1983.

Somebody said on Twitter last night that Lill was dreadful during rehearsals week and there were stories in the local papers about her being sacked. Then on the night she pulled it out the bag.

“However, it is only available for an unspecified “limited time”. Based on past #EurovisionAgain uploads, this will probably remain online for one week after the YouTube premiere date.”

This is actually really annoying, I probably missed HD versions of some of my favourite songs. No doubt some people will have downloaded the HD versions but can’t see them on other streaming channels.

The Swedish and Norwegian songs still overrated – by reputation I’d guess. At least some got a bit more justice, like the Finnish song. The Turkish and Israel songs rated higher than before which seemed fair.

I feel sorry for those behind Eurovision Again at times. There were lots of grumbles on social media last night from people about having no interest in an older Eurovision. Then when they show a recent one, people grumble about that (like when they showed 2018.) You can’t please everyone! And they’re not getting paid for this.

I don’t know, I’d like to see a black and white one at some stage.

Not every song before then was a ballad. Serge Gainsbourg. Do you know Monaco 1967? I love that one. There is a lot to be discovered! History is always interesting.

Most younger viewers are narrowminded with Eurovision and don’t care about earlier years. Obviously that can’t be pandered to otherwise you’d just ignore the whole history of the contest and other styles of music and ways of presenting the contest, some of which like live performance shouldn’t be forgotten.

I agree with Jonas that showing an older b&w wouldn’t be boring. Sadly, I think the fans Joe refers to would have a conniption if, for example, the next one is 1960. Do you think the typical banger-obsessed EA fan who wants to party is going to want Tom Pillibi? Which is sad, as Tom Pillibi is just as much a part of Eurovision history as Diva or Shady Lady or Euphoria. I think 1965 or 1967 would be good b&w ones to show, if they choose to. I was really bothered when the EA people joked about showing 1959… Read more »

Nice year. Voting was a mess and crazy but it makes sense at the same time with that line up I guess.
My favourite probably Israel.Performance, tune, fun. Simple enjoyment. By nostalgia, I’d go with Italy. Feels very Albano and Romina and their 80’s.
I like both Norway and Germany pretty much on the same level. I give the edge to Norway just because Elisabeth.

Last edited 2 years ago by Marc
2

I gave Italy my 12 on Saturday, I was only four at the time but it was the only song I could recall, so it must have some meaning or connection for me.

Once again, straight up had no idea about this happening again! Great year, can’t wait to watch.

Good to see SVT on board now too, joining KAN. Will open up a lot more potential years for the final four editions.

Yes, one on the third Saturday of each month through December, which should tide us over nicely before the songs for Eurovision 2021 begin to be selected.

Man, they better pick wisely for those last four! So many contests I’d love to see in better quality. At least they got most of the ’00s.

Maybe not even that! They’ve said they’re not 100% sure there will be a December one. May just be three left.

Maybe they’ll do some more next year in the offseason. I’m assuming the plan is to get definitive editions of all contests they can.

I do wonder if it will return after Eurovision 2021. It doesn’t need to happen between Jan and May as we have national finals and then buildup to contest itself.

Maybe they’ll show a few in the weeks running to Eurovision 2021 though? To get people in the mood.

It would be good to get 1992, from SVT as well, if only for the fact that Turkish performance from that year is completely impossible to find – it’s blocked by TRT basically everywhere. I remember liking it – it was a fine performance of a very nice song although I had to laugh when main singer was looking unimpressed by the high note of backing singer at the end of the first chorus. 🙂 It’s the most recent ESC performance that is unavailable to watch.

Sorry, my links never seem to work, don’t ask me why. Anyway, it’s on YouTube right now. Search Eurovision 1992 Turkey. Be quick, it might not last long!

‘92 is also a contest that’s really hard to find in even decent quality.