She’s the blonde beauty who this year became one of the most beloved singers to Eurofans in Finland. In March Erika Vikman stunned us all with her scintillating performance of her song “Cicciolina”. The song was noted for its hedonistic party vibe and Erika’s raw sex appeal. Now, fans of hers will be delighted to know that she’s back with a new song, “Syntisten pöytä”. And the sex and hedonism is still alive!

“Syntisten pöytä”, like “Cicciolina”, is a sexy party pop song entirely in Finnish. It translates to English as “table of sinners”, and is about Erika inviting you to her banquet. Those outcasted from society are welcome at Erika’s table – “abandoned, deceived, divorced, runaway“.

It has the same libertine quality that Erika is known for, with the added theme of extending a hand to the oppressed. Erika sings above soaring Europop synths and heavy beats, very reminiscent of her previous works. There’s not much new here, it’s not exactly revolutionary in terms of music — but when you’re onto a good thing, who can complain!

The music video is also full of life, love and libertinism. Erika sits at her table, dancing and kissing her fellow diners. She eats grapes like a queen, wears a choker reading “SEX” and a necklace with a cross. Money rains from the sky and champagne rains from Erika’s glass.

She looks gorgeous in her various outfits, most notably a tight red jumpsuit, and her face covered in diamonds and bubbles. It’s a really spectacular visual treat, and it’s wonderful to see Erika clearly having so much fun.

While 2020 might be a difficult year for most of us, it’s been a spectacular year for Erika. Aside from being a massive fan favourite at UMK, she also placed third as the Wasp on The Masked Singer Finland and is set to perform on the upcoming Eurovision Cruise.

Sadly, Erika has confirmed that she won’t be submitting an entry for UMK 2021 but with her current run it’s hard to imagine we’ve seen the last of her on the big stage.

So what do you think of Erika’s new offering? Would you like to see her at UMK again? Let us know below! 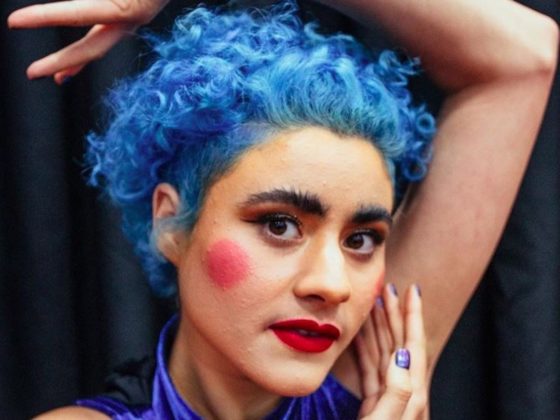 I liked “Cicciolina” very much but her new song “Syntisten pöytä” is also very nice !! I hope that Erika will represent Finland once in ESC !!

If u listen studio version of swedish schlager every song have same formula in 3min.

Still amazes me that she wasn’t the choice this year.
This is another great song, not a million miles away from “Cicciolina” in style. Yep, am definitely a fan and…even if she doesn’t need it…would love to see her in ESC.

If Finland send Erika (I know it can’t be this song) then Helsinki 2022 becomes a lot more likely. Especially in 2021 as we all going to want something fun after covid