Slovenia‘s broadcaster RTV SLO has seen out 2020 with a big announcement for the new year. The broadcaster has confirmed that EMA 2021 will be held on 27 February — and with it, Ana Soklič‘s song for Rotterdam will be known.

The broadcaster announced the news today, where they revealed that of 191 potential Eurovision songs for Ana, three songs had been shortlisted.

RTV SLO’s announcement was a little ambiguous as to what happens next. In the press release, the broadcaster explains:

“The entertainment program, in cooperation with the performer and the opinion of the expert committee, will decide in the coming days on the suitability of one or two songs for EMA 2021.”

Some are interpreting this to mean one or two songs in addition to the three songs already shortlisted, while others interpret it to mean that the three shortlisted songs will be narrowed down to just one or two.

Slovenian Eurovision blog Evrovizija.com has interpreted it as the second possibility — that we’ll see one or two songs at EMA 2021.

Will EMA 2021 be a national final or just a song presentation?

The possibility of EMA 2021 only involving one or two songs suggests it could be a song presentation rather than a national final. The broadcaster hasn’t confirmed any details about EMA 2021 with regards to the song (or songs) for Ana.

RTV SLO has confirmed, though, that EMA 2021 will be dedicated to the 60th anniversary of Slovenia’s first participation at the Eurovision Song Contest.

The Slovene language was first heard at Eurovision in 1966 when Berta Ambrož represented Yugoslavia with “Brez besed”.

EMA 2021 will celebrate iconic Eurovision performances of Slovenia and Yugoslavia over the past 60 years.

Ana Soklič won EMA 2020 with the song “Voda”. She was then internally selected by RTV SLO to represent Slovenia at Eurovision 2021.

What do you think? Should EMA 2021 involve a vote for Ana’s song or internally select the entry? How many songs should Ana perform at EMA? Tell us your thoughts below! 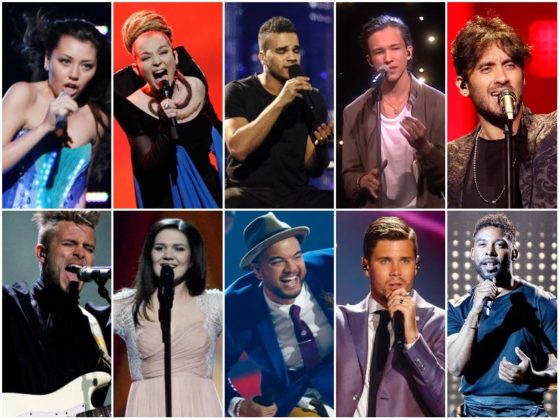 12 polls of Christmas: Who is your favourite fifth place Eurovision act of the 2010s?

Hopefully a better, contemporary entry, not like the awful Voda…

Why is there so many downvotes on every comment? What is going on

What’s up with the dislikes?

Everybody’s getting high downvotes, except one commenter, who is getting mysteriously high upvotes.

It’s kind of sad but also funny when you think about what it means: on New Year’s Eve there is an actual person sitting alone in their bedroom randomly downvoting comments on a Eurovision blog. I hope he or she is ok and doesn’t feel too lonely

Ana has a genuinely jaw-dropping voice that was wasted on Voda. Voda is a good song by itself, especially after the revamp, but at eurovision there is almost no way it would have gone upwards of bottom 3 in the semi. But I have faith that Ana can bring something spectacular

Her performance in EMA had one of the most impressive vocals of 2020’s Eurovision season. I hope they find the perfect song for her.

Voda is good ballad, the orchestral revamp in particular i loved

her attempt at a masterpiece such as Suus was admirable

i am again looking forward to hearing her music then, and hope the right choice is made for rotterdam, hope all 3 songs anyway are lovely to listen to

Happy New Year Ashton. I don’t agree, I think Voda would have qualified. But it’s all about opinions!

Happy new year! While I wouldn’t have been upset if it qualified, I just cannot see the televote giving it any points at all. A similar song (On My Way, though it is much much worse than Voda) landed second-to-last. I think the juries would have placed it around 10th by virtue of her voice, but if the televote slaughtered the song as I think it would have, Ana didn’t stand a chance. But then again, this is all just speculation.

Last edited 1 year ago by Ashton
0

While you are probably right, I think it may have been the other way around! I voted for On My Way as I like Omer and thought Stop should have qualified. However in hindsight it sounded like a showtune and a talent show winner’s song. Voda was more earthy and ethnic.

Stop was great, I’ll give you that, but On My Way was such a let down. And I agree with you, Voda had a more soulful touch, I just dont think it would have been enough. But I guess we’ll see if Ana qualifies in 2021 with a different song!

I liked On My Way. The problem is that the song didn’t click with Omar. He performed it in such a heavy, stoic way that it lost that hopeful ”Disney-esque” quality it had. Don’t get me wrong, the song is a bit archaic and not necessarily innovating, but I don’t mind these epithets if the performer is able to convey the ”magic” on stage. Omar was too ”brooding” for the material. Still, his Stop is simply amazing. He fully committed to that song and it shown. He should have qualified in 2005.

Personally I just disliked On My Way as a song. Frankly it felt more 2005 than Stop did: they could have exchanged places in terms of time period. On My Way and Verona are just the epitome of songs I hate – cheesy, sappy, underdone, with incredibly lazy hooks. That’s just my opinion though, and we can 100% agree that Stop should have qualified in 2005.

Coincidentally, both On My Way and Verona are on the middle of my 2017 list. I like them, but I am not a passionate fan. I wasn’t that upset when they stayed in the semi, but if they qualified, I wouldn’t be pointing them out as ones I’d replace in the final.

Odd though that he wrote On My Way himself!

Slovenia is one of my favorite ESC countries ( also one of the underrated ones ) so i am happy and excited for Ana’s song cuz she has SO MUCH potential! I liked her song last year, but i think she can do better! Good Luck Ana

As a Slovene I don’t understand what they meant by their announcement? But we’ll see… I also think it will either be a 2 song nf or a presentation show..

ok not that I care about dislikes, but can anyone explain why do I get those?

Don’t worry about it…. random people always dislike me and a lot of others :/