Norway’s Melodi Grand Prix is officially half-way over. After Blåsemafian feat. Hazel won the first semi-final and Raylee took the second, Semi-Final 3 took place on Saturday. Four acts sang on the impressive Fornebu stage. After two duels and a final showdown, Emmy emerged victorious. Her halloween-inspired performance of “Witch Woods” won the night — and a spot in the grand final.

The concept of the semi-finals is as follows: The four semi-finalists are split into two duels, which is determined by an on-stage draw. The winners of both duels then face off in the final duel, where the winner advances directly to the MGP 2021 final. The remainder of the acts go to the wildcard round (siste sjanse, or final chance) on February 15.

The competing songs and artists of the third semi-final were: “Own Yourself” by Dinaye, “Smile” by Big Daddy Karsten, “Vi er norge” by Ole Hartz, and “Witch Woods” by Emmy.

Ethiopian-Norwegian jazz-pop singer Dinaye performed her upbeat track “Own Yourself”. The youngster gave a funky red and gold performance that reminded some fans of Belgium’s Eurovision 2016 performance from Laura Tesoro. The MGP Junior alumnus ultimately lost the duel to Big Daddy Karsten’s uplifting song about a loving relationship that involves having sex with people outside of that relationship. Karsten spread the message of “Smile” with an impactful and very LGBT-friendly performance — it was all rainbows and dancing queens. He qualified for the final duel, while Dinaye advanced to Siste sjanse.

Just another Saturday night in Oslo ? Thank you for the vibes @BigDaddyKarsten ?? #MGP2021 #NRKMGP pic.twitter.com/8yZTEyDAxt

At this point, Kaja Rode debuted her strong piano-heavy track “Feel Again”. Her performance was an exercise in beautiful lights and stage production.

What do you think of the results? How will this “Witch Woods” fare in the grand final? 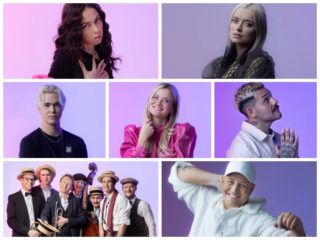 Poll: Who should qualify from Semi-Final 1 of Melodi Grand Prix 2023?

Like you Una I thought Smile was a nice song with a good singer. But the “staging” detracted from it. People seem to feel obliged to throw in the kitchen sink to these performances I guess it is how the contest has evolved.

wow trash semifinal for Norway. Witch Woods is catchy but cringy. Super cringy and campy (in a bad way) was the pink bear.

Material just to please certain groups and not serious contenders.

Wow, this was the first semi that I felt was a bit amateur hour. Like I was watching a high school talent contest and then the teacher comes in at the end with the cheesiest 90s song and just because she hits a couple of high notes you’re suppose to forget all the cliched unmemorable lyrics she just warbled through. Kudos for the graphics and the camerawork. But tonight it was feeling like old school Lithuania or Latvian national final and not the top notch MGP we typically get.

The text and the headline contradict each other about today’s winner.

At this point, the prequalified entries are all bottom 5 material, while these Semi winners are real quality.

I don’t agree at all

This was the weakest semi, and a winner that will likely come bottom 3 in the final. This really showed just how good Raylee was last week.

Yeah, I don’t get “Witch Woods”. The performance was really awkward and unconvincing. There’s some ideas there but they don’t come together as a song for me. I think both the songs that lost in the initial duels were better than the two winners. Dinaye and Ole Hartz put on great performances.

Not sure about Kaja. Her vocal fluctuates between being a bit weak at times but impressive at others. The performance aspects I was fine with but the song doesn’t quite get to where it should.

Kaja sounded like she had a strong core mid-range voice, and towards the end was able to belt out those higher notes. Is it possible that the small headset microphone couldn’t pick up her falsetto notes in the first few minutes? I’m not a sound-tech expert, but I did hear a powerful voice when it mattered.

The high notes weren’t a problem, which is why I was surprised that she sounded a bit strained in what should’ve been the easier parts of the song. Could it be down to the sound tech? Not sure. If it had been a problem on the big notes as well, I’d be thinking possible sound probs, otherwise, I’m leaning more towards uneven performance. Going to be hard going toe-to-toe in the final with somebody like Alexandra Rotan, who is so vocally consistent across the duration of her song. So if it is a vocal issue, they need to work on… Read more »

Last edited 1 year ago by Briekimchi
3

Kaja Rode gave a great power-vocal performance through that small headset; there is potential there, for sure.
I’m a bit sad that Big D Karsten didn’t win this semi – I don’t think I have ever seen gay bears represented in pop ever before.
But well done to Emmy anyhow; “Witch Woods” is an interesting song musically, even if I do find it to be a little offensive to some friends of mine. N.B. That’s not her fault, unless she wrote the lyrics.

I was only looking at Kaja’s teeth the entire time

Kaja Rode’s performance lacked a lot of dynamism. The song is full of tempo changes and accentuated string riffs. Her choreography did not correspond to that and I found it looked very weird. She could be joined by some dancers or a fierce group of background singers.
Then, what was that outfit? Though I liked the colour of it, I would like her to change the dress. It looked pretty unfortunate in a lot of angles and with the windmachine barely working.

I didnt expect that Emmy will sounds good like most of this kinda genre was so bad when comes to live. But she seems like dont what to do with her movement aspecially chorus part and have no confident, She need an attitude either “Bad Bitch vibe” or “Cute innocent girl but will stab you if you turn ur back vibe”.

Mgp is really great with staging the acts this year,but I am still disappointed by the level of the songs..

Just need to throw this out there: This was NOT the weakest semifinal. How can people even say that?!?! Beady Belle, and Ketil Stokkan were cringeworthy performances, and same to Jorn despite him having an okish song. There were no really bad songs or performances in this semi!!! Making it the strongest of them overall!

I agree! This was not the weakest SF- all four had something to admire and might have achieved more if they were in any of the other semis.

It was a fun show, because every entry was so different from the others. Unfortunately, none has left a big impression on me. For a change, my favorite semifinalist won, but as I suspected, “Witch Woods” proved to be a hard song to pull of when performed live. I hope Emmy will be more confident in the final. Kaja on the other hand sounded great. Too bad I can’t say the same about her song.

Last edited 1 year ago by Sabrina
9

What an absolute disappointment Kaja Rode was… I had expected it to be a dark horse and a contender since she is such an unknown name and still got a ticket to the final, but the song is so dull. Song wise it is a dated pop schlager and it made me think of Charlotte Perrellis “Hero” from 2008, and the staging was just the dullest ever. It was so obvious they wanted to create a Loreen-moment on stage but it was just a massive failure all through… The dated rythm effect just ruins the entire song. They should make… Read more »

Kaja Rode was the weakest song so far counting those in semi finals as well. Really random song.

Just no, but it is quite memorable which is never a bad thing for Eurovision.

I was actually surprised that Emmy made it through her duel, even though I really like the song. She looked so insecure during the first performance, it seemed like she was shocked herself when she was announced the winner of her duel. She was lucky that Ole Hartz seemed a bit awkward aswell and seemed to rely a lot on his backing vocals. In the second performance Emmy definitely gained convidence during the song, but she still really needs to losen up. Still glad she won the semi though, as I couldn’t see any other song being succesful in ESC.… Read more »

Last edited 1 year ago by Oscar
3

to be honest, i thought this semi was the weakest one so far. non of the artist were able to «fill the stage». Dina did an okay performance with an okay song. Karsten’s track is just not for me, but i do respect the people that like it. Emmy’s song is the best, but her stage show was SO BAD. It looked cheap. Ole had the best show, but i dont enjoy the track sadly. Kaja did a good job tho. Her vocals weren’t the best in the beginning, but she did a good job on the last notes!! So… Read more »

I think Kaja was the best

Not a big fan. I enjoyed more Daddy and Ole tonight. Wasn’t the strongest sf

Im sad, bc we will not see that hot army boy in final, but congrats to Emmy

I’m probably just bitter because Big Daddy Karsten didn’t win, but I gotta say the staging for Witch Wood was surprisingly dull an unimaginative considering the potential this song has.

Hmmm was the weakest semi final so far. Emmy was OK, but the performance was a little out of her depths, gave me high school drama project vibes. In the end my least favourite before Big Daddy was my best. The song was catchy. A little to much ‘happy’ in your face though for me haha! Kaja Rode was good, good staging/lighting, think the song will be a grower. She gives me Jessica Mauboy vibes.

Wait I’m confused at this part where it says “Emmy then gave the final performance of the night, but her song did not manage to beat ‘Smile’” because Emmy did beat Smile.

Oops. It’s probably a sentence left over from an earlier draft. Let’s see if Wiwi spots it or not… 🙂

My bad! Thanks for pointing this out.

While I acknowledge it’s a great song it’s not for me, I’d have liked to see big daddy karsten win it, but this was the best semi final so far and very enjoyable

Well earned, good luck to the other competitors in the sista chansen round!